Morocco Travel Planning is the summary of my six-week road trip through Morocco during the autumn of 2015 (October and a bit of November). The pace of traveling was slow and flexible. I could go and stay wherever I wanted with a rented car. 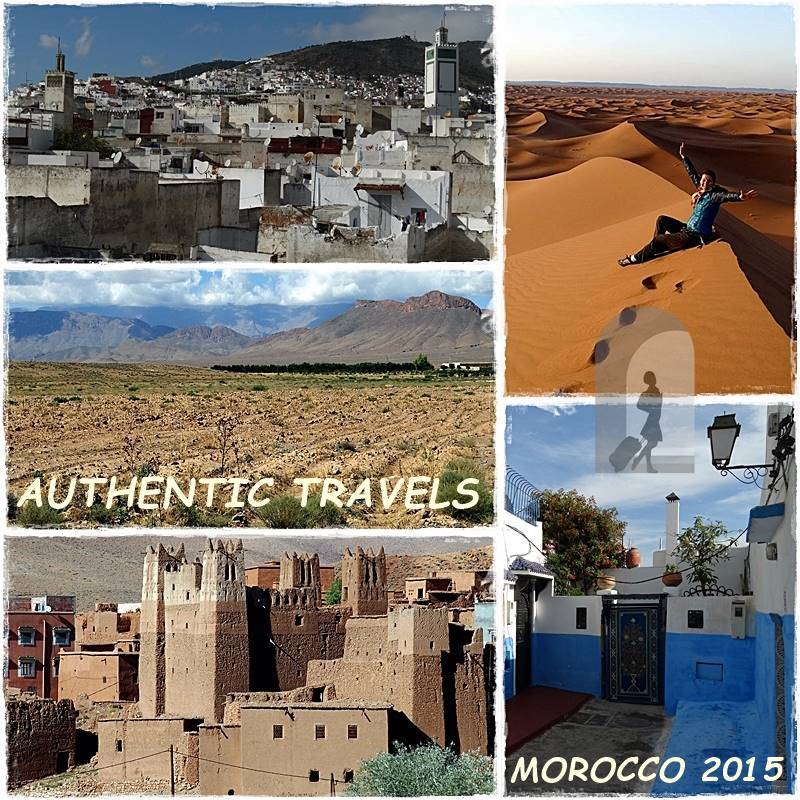 My travel planning for Morocco started two months before the trip. I used only the Lonely Planet Guide and ignored any other articles about Morocco from the internet. I considered that the guide book offered me enough, well-synthesized information to plan my trip. I could choose the places in the guide book where I wanted to go for six weeks – tourist places, UNESCO heritage sites, as well as off-the-beaten-track places. However, after booking the flight ticket, I realized that six weeks weren’t enough for how much I wanted to visit. Unfortunately, I had to give up my plan to go to the very southern part of the country – Western Sahara (Agadir, Taroudant, Tiznit, Tafroute, Mirleft, Laayoune, Dakhla).

Before leaving to Morocco, I had booked/ contacted/ written / messaged:

– my car, which I booked a few days after buying my flight tickets (with a later extension made three weeks before the trip)

– several Couchsurfing contacts who could have helped me with information, accommodation, and phone calls if anything happened to me in Morocco during my stay

– several Couchsurfing requests accepted in Marrakesh, Casablanca, and Rabat (I messaged my hosts before the departure to Morocco as I knew I wouldn’t have time for messages during my stay in Morocco)

– a collaboration with a traditional riad in Fes-el-Bali (the old medina in Fes): here I wrote about Casa Aya Medina in exchange for free accommodation

– a four-day camel trek in the desert near Zagora-M’Hamid/ Erg Chigaga (the highest chain of dunes in Morocco): here I wrote about this Desert Camel Trek with Tizi Trekking in exchange for a free camel desert trek (4 days)

When I traveled to Morocco, I wanted to do/ go to the following places (but I hadn’t fixed dates for them):

– stop in Bhalil village for an interview with Kamal Chaoui, the owner of Dar Kamal Chaoui Berber guest-house

– explore all of the four Imperial Cities of Morocco (Fes, Marrakesh, Rabat, and Meknes)

– stay in local, traditional riads as much as possible and enjoy their elaborately colorful decorations (wood carvings, tilework, stucco plaster)

– sleep in local camping grounds as much as possible (Dades, Todra, N’Kob, Zagora, Chefchaouen) – I brought my small tent with me during the trip

The final result of the trip to Morocco, where I stayed for six weeks, is a series of 21 travelogues. Enjoy your reading and let me know your opinion about Morocco. Which is your favorite place in Morocco? Why? 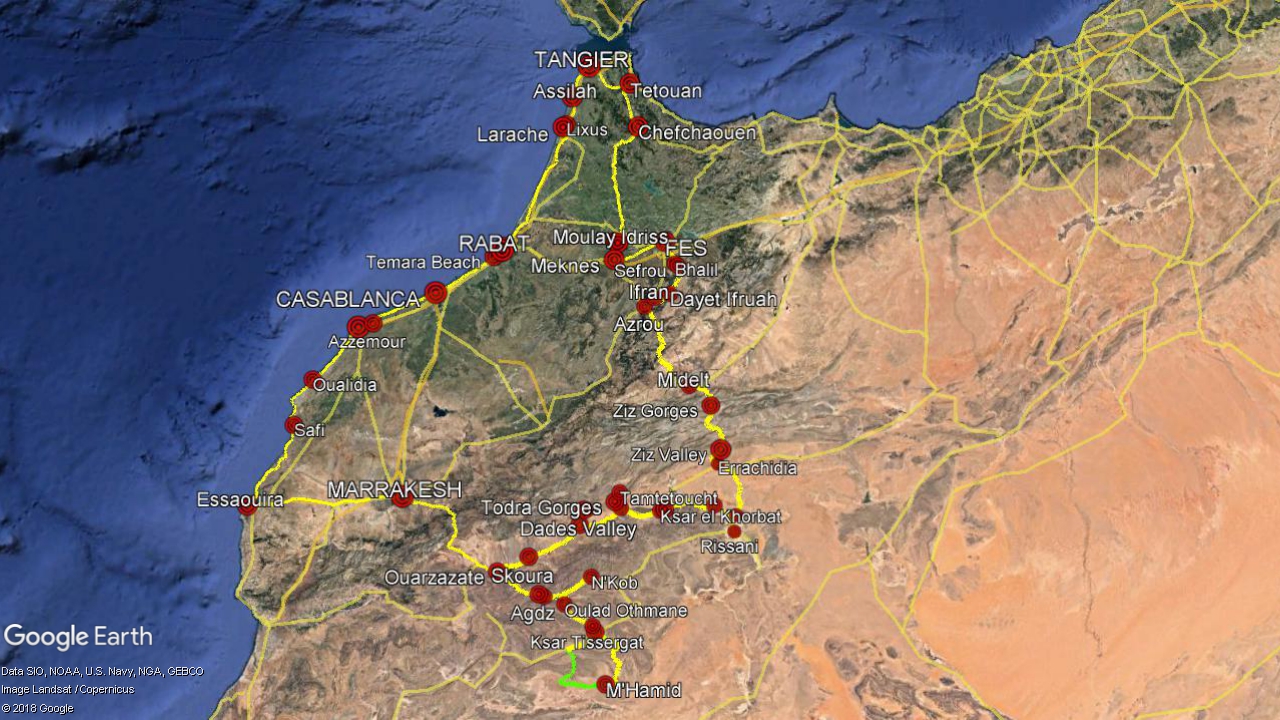 From Erfoud to Zagora, with stops along the Todra, Dades, and Draa Valleys (5 days) –

Traveling the Draa Valley to Zagora, with a detour to N’Kob – Morocco 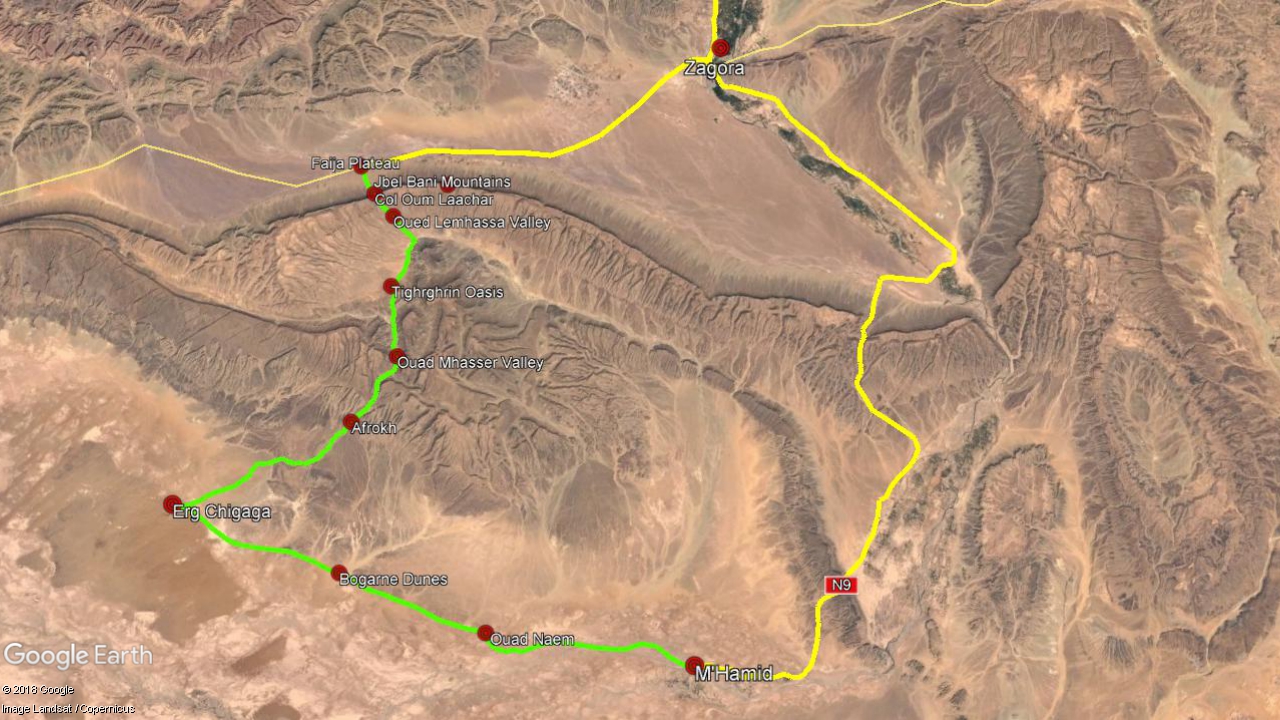 Long drive from the Sahara desert to Marrakesh (1 day) –

The road from Sahara to Marrakesh, with a stop in Ait Benhaddou – Morocco

The Pink City of Marrakesh (4 days) –

Marrakesh: the pink city – souqs and luxury (I) – Morocco

From Marrakesh to Casablanca, with stops in Essaouira and El Jadida (4 days) –

The road from Rabat to Tangier – Sale, Larache, Lixus, and Assilah (3 days) –

The road from Rabat to Tangier with stops in Sale, Larache, and Assilah – Morocco

Tangier – the Gateway to Africa – Morocco

From Tangier to Meknes, with stops in Tetouan, Chefchaouen, and Moulay Idriss (6 days) –

Chefchaouen – The Blue City of Morocco

The pilgrimage to Moulay Idriss and Roman Volubilis – Morocco

This is the summary of my six-week trip to Morocco. Enjoy your reading and let me know your opinion about traveling to Morocco. Which is your favorite place in Morocco? Why? Where would you go?