The road from M’Hammid to Ait Benhaddou

Short Description. A private taxi took us from M’Hammid to Ammzerou (near Zagora), where I had left my rented car. After lunch, we strolled through Ksar Ait Benhaddou for a couple of hours. At dusk, we crossed the High Atlas Mountains via the Tizi N’Tikka Pass and arrived at Naima’s home in Marrakesh around midnight.

Meriem had an early-morning flight from Zagora to Casablanca, so she left by herself. Mohammed had talked with a private taxi to take us along the Draa Valley: from M’Hammid (where the camel trek through the Sahara Desert ended) to Zagora (where the trek had started a few days before). The Draa Valley appeared very dry in this section. Low-altitude reddish mountains and typical mudbrick kasbahs dominated the valley. Halfway to Zagora, we stopped in the small town of Tamegroute – known for its desert pottery of colored plates and tajine cookware. Eventually, we went to the camping ground Oasis les Palmier in Ammzerou, where I had parked my rented car for four days throughout our trek in the Sahara Desert. 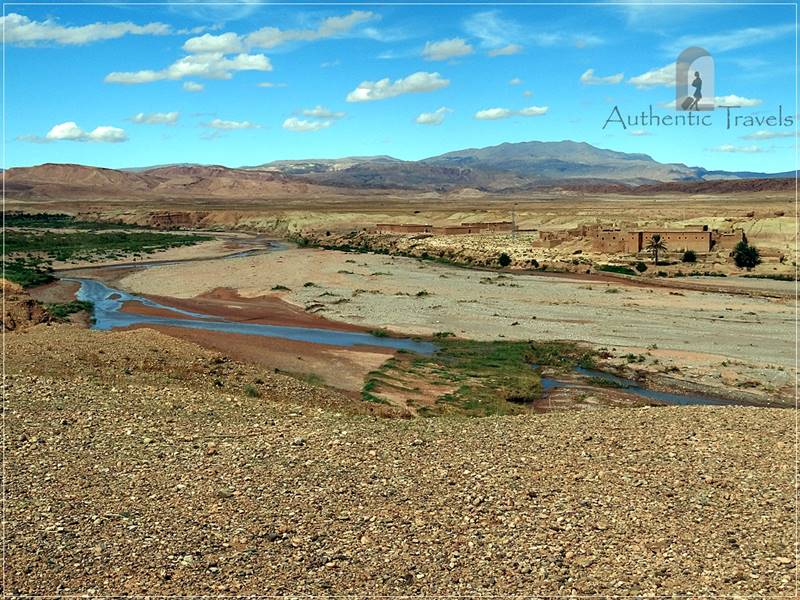 The road to Ait Benhaddou

An endless road along the Draa Valley awaited us from Zagora to Ouarzazate (the same road I drove a week before when I had come from the Dades Gorges). Palm-tree oases abundantly grew along the 200-kilometer Draa Valley. Ksars with mudbrick houses dotted the border between vegetation and rocky desert (hammada). On the Oued Ounilla, a valley with little vegetation, the iconic ksar Ait Benhaddou appeared on the horizon. 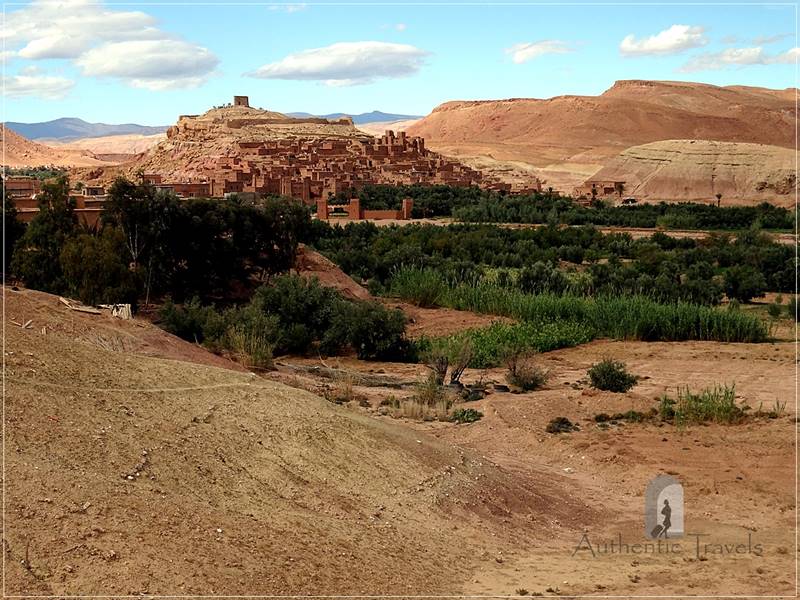 Ait Benhaddou: the location of the ksar on the Ounilla Valley

We parked in Issiwid (a village built opposite Ksar Ait Benhaddou). There, we quickly had lunch – sheep skewers with vegetables-rice and a tajine, at a Moroccan riad known by Mohammed. After lunch, we wandered the streets with traditional mudbrick houses in Issiwid. Piles of rubbish, hay, and mudbrick dwellings adorned with geometric Berber decorations flanked the dusty streets. Colorful stalls selling Berber shawls, jewels, and knives, as well as djellabas and masks lined the narrow alleys of the village. From Issiwid, we then crossed the Ounilla River and reached the lower part of ksar Ait Benhaddou. 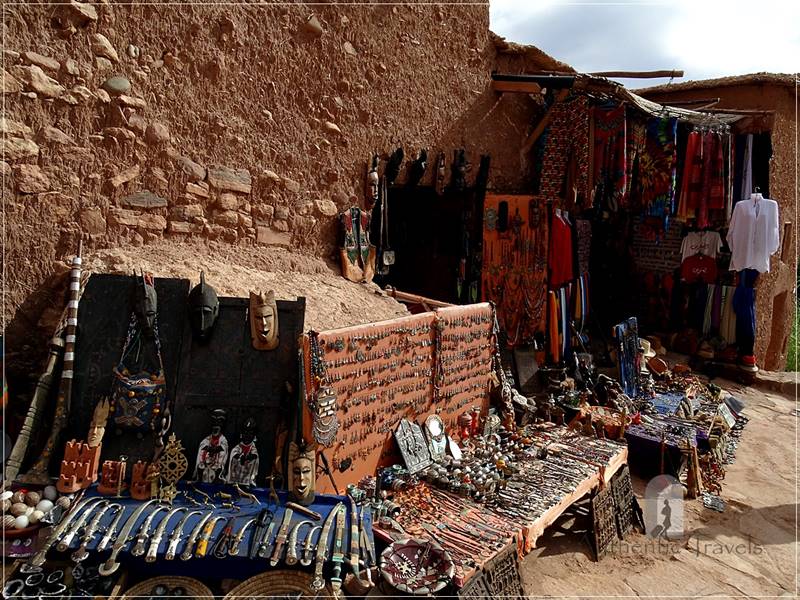 Ait Benhaddou was an important outpost on the caravan route that connected former Sudan with the imperial cities of Morrocco. Listed as a UNESCO world heritage site, the ksar was a typical example of a compact fortified habitat of the pre-Saharan regions in southern Morocco. It featured simple mudbrick buildings built in the 17-18th centuries and reddish dwellings crammed at the foot of the rocky slope. Also, a collective granary (igrhem n’iqadarne) surrounded by a fortification wall dominated the settlement from the hilltop.

We explored the narrow, winding streets of the ksar, then passed the central mosque. After that, we climbed to the hilltop fortress. Here and there, sloping streets passed through vaulted corridors built on the ground floor of mudbrick houses. Not many people lived in the village, and only a few buildings seemed entirely restored. Most of them collapsed or seemed abandoned, while their inner courtyards looked more like residual space. However, some houses had the inscription ‘Gladiator’ pointing toward the place where scenes of the famous movie had been cast. 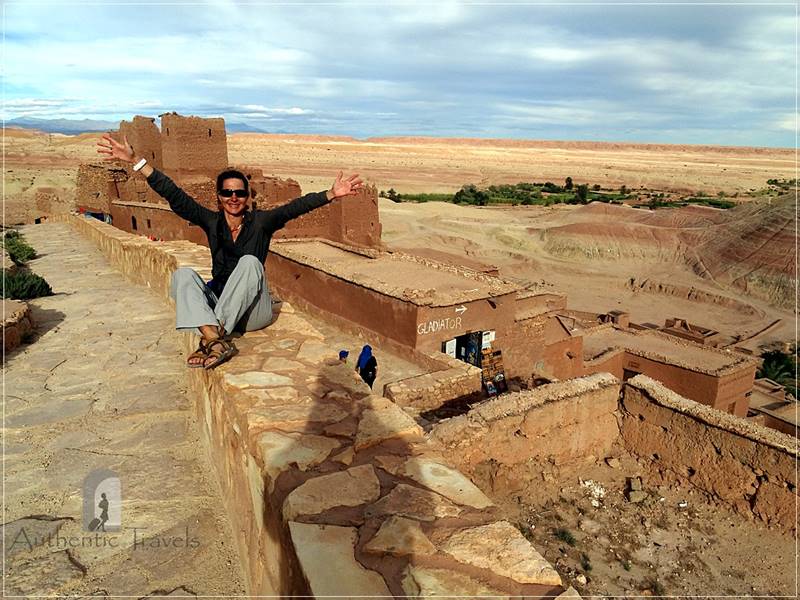 Ait Benhaddou: view from the hilltop

Noble families built approximately eight kasbahs in the ksar’s neighborhood near the river. The volumes of the kasbahs featured defensive angle towers with a richly decorated cornice. Moreover, the imposing kasbahs could be easily distinguished with their mighty walls within the housing area. In the village center, we entered Kasbah Ait Ougrem – a large, fortified mudbrick house, developed on several floors around an inner courtyard and four defense angle towers. The kasbah had minimal spaces with little basic furniture. On the ground floor, it had a kitchen with an earth oven built directly on the ground. Next to the kitchen, it had a meeting area with colored bedspreads and Berber carpets. In the kasbah’s courtyard, a donkey reminded us of the traditional ‘Berber car’ (the most popular mean of transportation in Morocco). 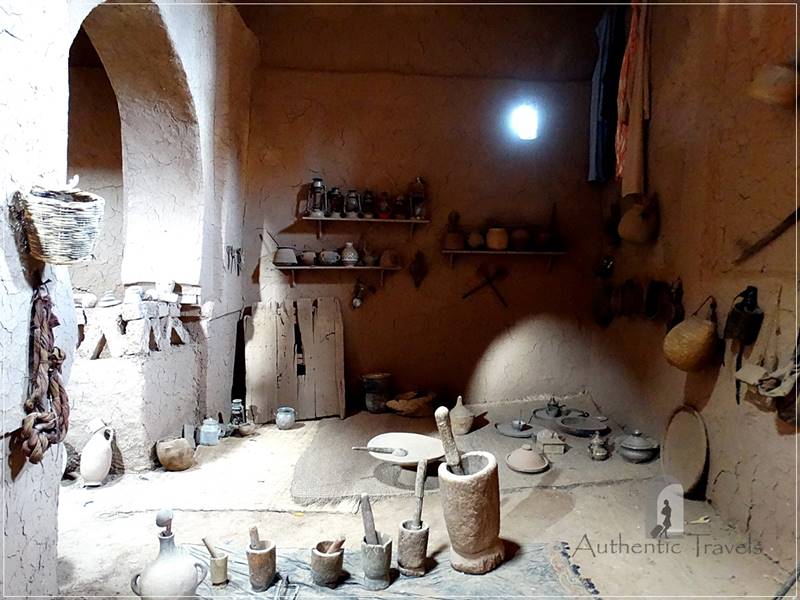 We left Ait Benhaddou late in the afternoon (around 6 p.m). Before leaving, I called Naima and she assured me that I could arrive at her house in Marrakesh even late at night. I bought a Coca Cola, then set off to Marrakesh. During the whole road trip, Mohammed was my co-driver and helped me whenever I needed him. The winding road first climbed toward the High Atlas Mountains, then snaked down to Marrakesh. Luckily, we reached the Tizi N’Tikka mountain pass right before dusk. After we passed it, the sun disappeared behind the serrated ridges of the mountains. 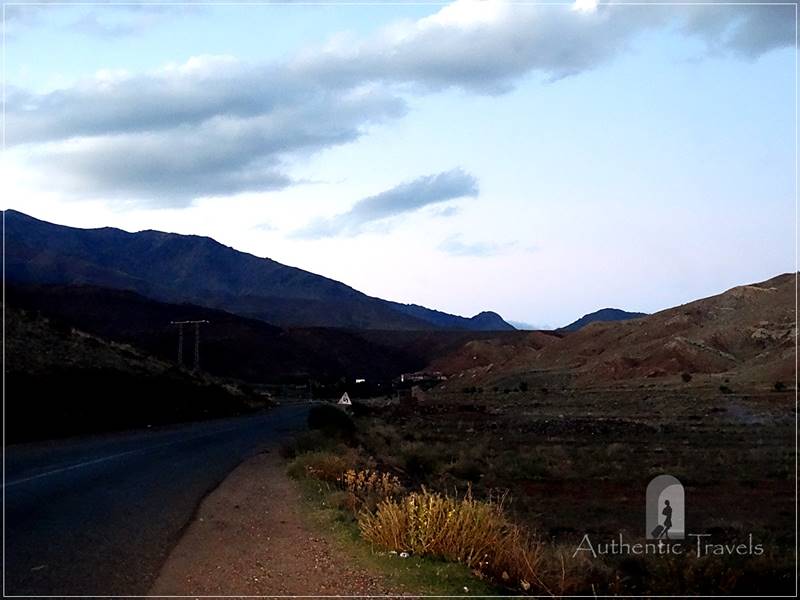 The road from Ait Benhaddou to Tizi n’Tikka Pass

The Tizi N’Tikka pass (2260 meters of altitude) marked the highest spot where cars could cross the High Atlas Mountains. The road connected Marrakesh to the oases in southern Morocco. It bypassed the old caravan route that once connected the imperial cities with the Draa Valley. Even though there were only 200 kilometers from Ait Benhaddou to Marrakesh, I drove slower than I had expected. The traffic conditions created a dreadful combination of pitch-darkness, drizzle, and the dazzling headlights of the cars coming from the opposite direction. Mohammed soon specialized in turning on and off the high beams. Finally, at midnight, I enjoyed driving on the streets of Marrakesh when the traffic had already reduced to the minimum and was less terrifying.

18 Responses to “The road from Sahara to Marrakesh, with a stop in Ait Benhaddou – Morocco”