Short Description. From Ville Nouvelle, I went to Djemaa el-Fna Square and the old medina (the area with riads, souqs, and funduqs). There, I visited Douira du Musee Mouassine, Medersa Ali Ben Youssef, and Musee de Marrakesh. In the evening, I met with Mohamed in the central square and enjoyed the lively atmosphere.

On the first day in Marrakesh, I slept until late in the morning – especially after the long road trip of the previous day (from the Zagora desert over the High Atlas mountains and down to Marrakesh). Before she left to her job, Naima had prepared a simple breakfast for me: omelet with typical Moroccan bread and green tea. After I had breakfast, I relaxed in the cozy living room in Naima’s flat, with her kitten White in my arms. Meanwhile, I posted some pictures from Morocco on my Facebook page, Authentic Travels.

At noon, I wandered through Naima’s neighborhood – a neighborhood with stylish villas, and then headed to the old medina. Firstly, I crossed Ville Nouvelle – the new part of the town, with modern buildings built by French colonists in the early 20th century (during the French protectorate). Tall European-style buildings flanked the streets while large boulevards led to the tangled labyrinth of the medina.

The pink-orange fortification walls surrounding the old city (medina) raised opposite an intersection with heavy traffic. Marrakesh was founded by Almoravids (1070-72) and then, it was the capital of the Almohads (1147-1269). It gradually became an important cultural, political, and economic center in the western Muslim world (North of Africa and Andalusia). Even though at the origins it was an outpost for trading caravans coming from the desert, the Almoravids fortified the city and built an underground irrigation system (khattara). However, during the Merenids dynasty, Marrakesh lost its importance in favor of the Imperial Cities – Fes and Meknes. On the other hand, Marrakesh flourished during the Saadian dynasty when the rulers intended to transform it into an imperial capital. 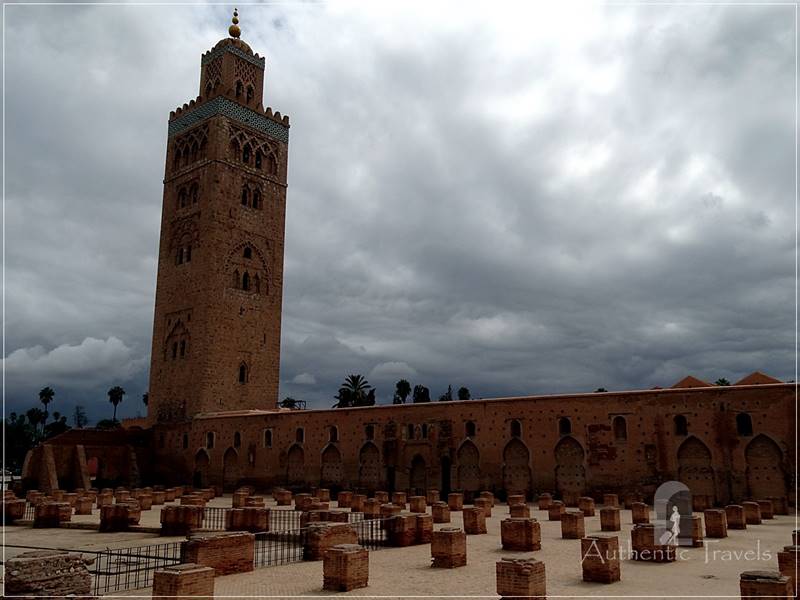 A park with lush vegetation stood in front of Koutoubia Mosque, an iconic monument in the city’s religious architecture. The mosque’s minaret was the tallest in the city (70 meters in height). Consequently, local people considered it a significant landmark in the urban scenery and a symbol of Marrakesh. Nearby, street vendors sold water from colorful traditional leather bags, whereas a little further, the city’s most famous market, Djemaa el-Fna Square, opened up its large space.

Djemaa el-Fna Square, a genuine open-air theater, was listed as a UNESCO intangible heritage site for its inherent values, liveliness, and traditions. The market’s swarm transformed almost every minute. New vendors came, others left. New artists showed up, others went home. Snake charmers were inviting everybody to take photos with their snakes. You could have a picture with a snake wrapped around you for a small fee. A bit further, drum players strolled among the stalls abounding with fresh orange juices (only 10 Dirhams). A poorly dressed man tried to sell his pigeons for little money. Stalls packed-out with dried fruits created a sort of organization in the square. But anybody sold anything at any time of day and night. Ivory statues, orange fresh juice, chickens, or henna tattoos. 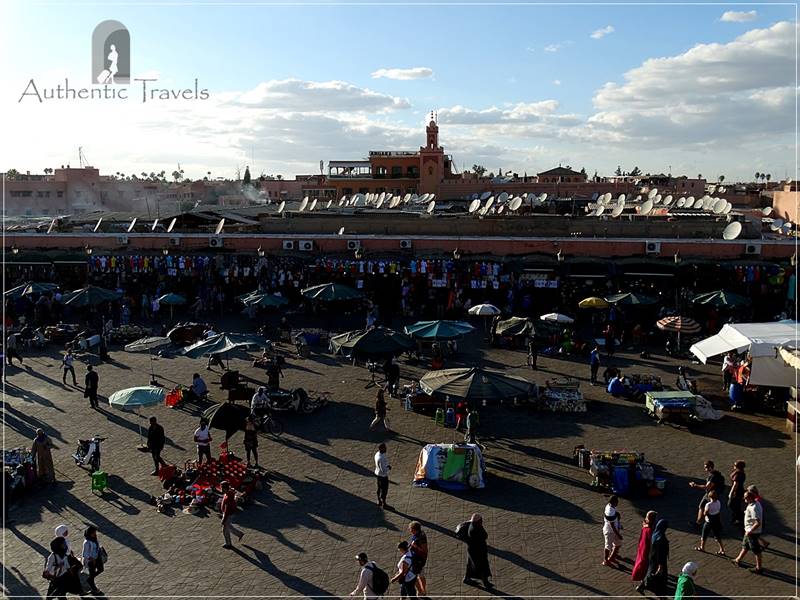 Souqs in the medina of Marrakesh

Marrakesh intensely lived its daily life pulsing in the maze of alleys, crammed pink-orange houses, bazaars (souq), inns (funduqs), public baths (hammam), mosques, and Koranic schools (madrasas). All kinds of merchandise covered the walls of commercial streets and overflowed in enormous quantities in souqs. Souq el-Kessabine was packed-out with merchandise, and a myriad of other alleys branched out off its main corridor – all of them full of shops with shawls, pillows, gold, jewelry, slippers, and anything else you needed. Similarly, Souq Laiksour abounded in Berber carpets hung from the ceiling, colorful scarves, and paintings of local artists. 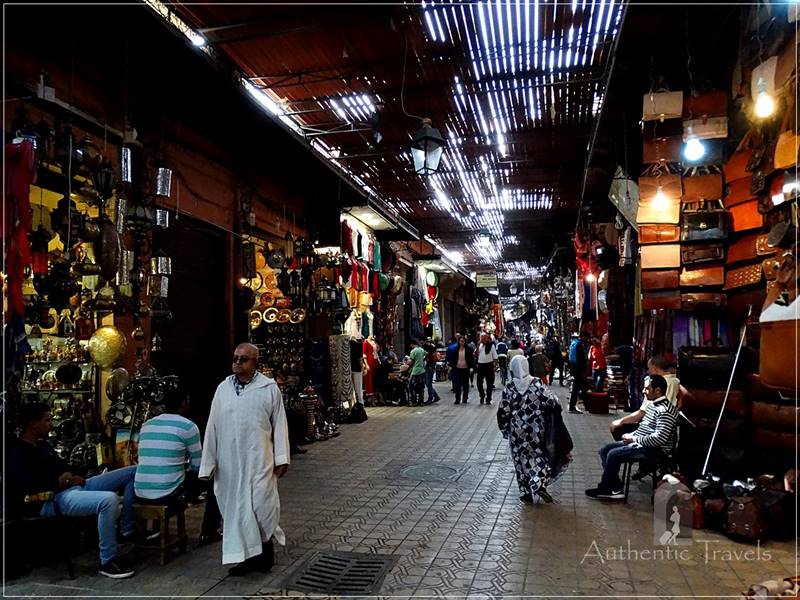 Marrakesh: one of the souqs in the medina

Elaborately stucco ornaments marked the entrance to secret riads hidden on side alleys or shrines of a saint (zawiga). Besides, streets in the medina were so narrow that only muzzling mopeds and mules could squeeze through. Also, merchants ignored the exfoliated plaster of the houses and displayed their goods on the ancient backdrop of the medina.

At the beginning of the 20th century, the medina in Marrakesh featured 80 public fountains, and each neighborhood had its mosque, hammam, gardens, and orchards. Near the Mouassine Mosque, Douiria du Musee Mouassine housed a small museum explaining the restoration works of this 17-18th-century building with typical Saadian architecture. Douiria (‘small guest house’) had been restored using modern techniques highlighting the original ornamentation impeccably preserved under a thick layer of plaster (original doors and windows made of inlaid wood, colored stuccoes, painstaking mosaics). 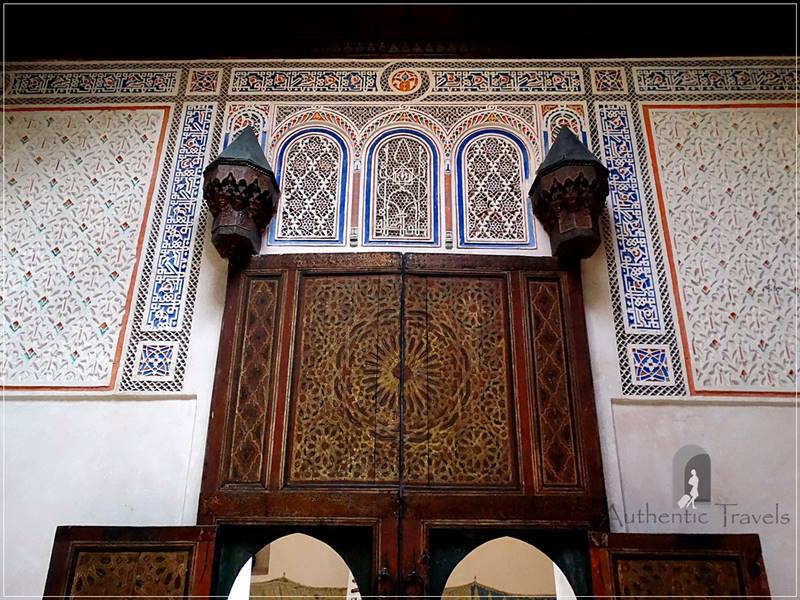 In the medina of Marrakesh, you could find over 140 funduqs – medieval inns organized around an inner courtyard with stables and merchants shops on the ground floor porches, and guest rooms on the upper floor gallery. The funduqs were later transformed into craftsmen workshops where modern artists exhibited their works of art or displayed old objects for sale. Likewise, the dilapidated courtyard of Fondouk Sarsar continued the street shops and local artists exposed their works under the ground floor arches. 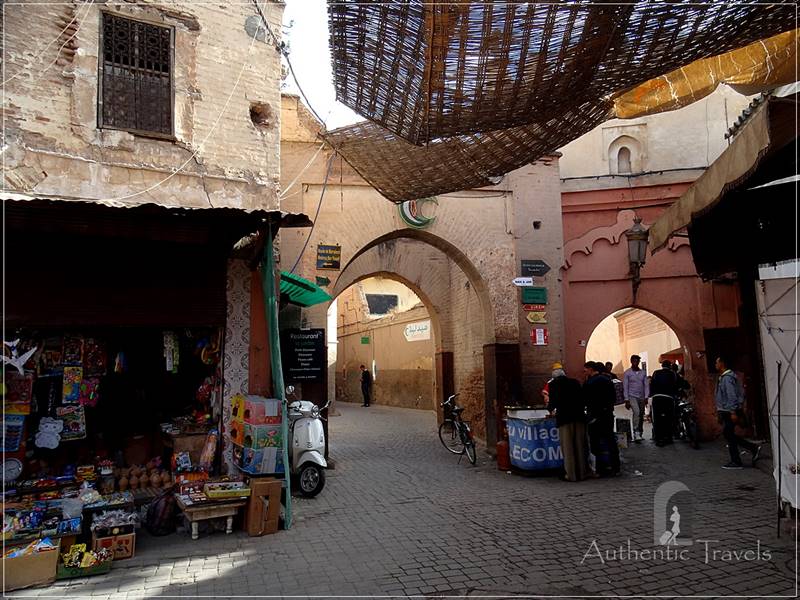 Marrakesh: a typical narrow street in the medina

Near Ali Ben Youssef Mosque, there were the crossroads of two main streets running through the medina – two routes that connected important gates (Bab Doukkala – Bab Aylen, Bab El Khemis – Bab Er-Robb). Next to the mosque, I entered Ali Ben Youssef Medersa – the largest Koranic center in North Africa built during the Saadian dynasty. Like other medersas in Fes, the medersa was centered around an inner courtyard with an ablution fountain and a prayer room with a Mecca-oriented mihrab. The first floor featured several small patios with galleries and carved wooden screens. Besides, it housed 130 modest chambers where once 900 students lived. Hispano-Moorish ornaments, thorough mosaics, richly colored stuccoes, and wooden lattice screens (mucharabian) embellished all corners of the medersa. 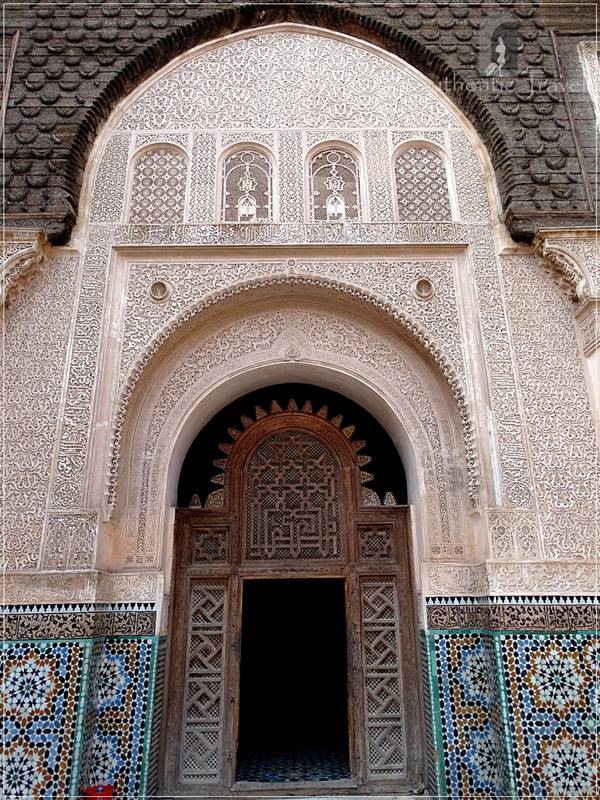 The former Mnebhi Palace was refurbished as the Museum of Marrakesh and it hosted sculpture, paintings, and photography exhibitions. The former palace featured a big inner courtyard, rich in colorful decorations and various ornaments. The courtyard was originally opened to the sky, but architects later covered it with a modern glass skylight. Also, the palace had a large kitchen and a royal hammam. 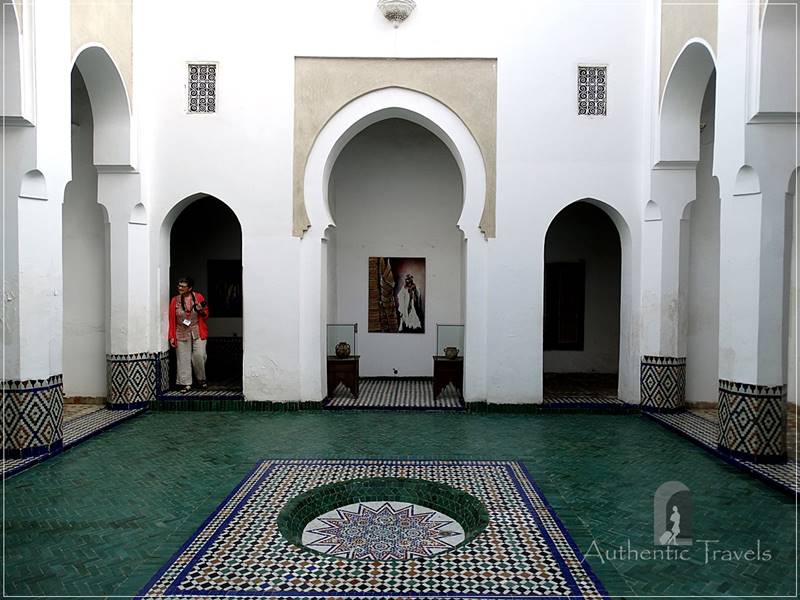 Mohamed didn’t know where to find me at Musee de Marrakesh, so we agreed to meet in Djemaa el-Fna Square. Alternatively, I chose a new route to follow on the way to the central square – a route running through countless souqs (Chaaria, Talaa, Serrajine) and lesser-known neighborhoods. In the less touristy places, vendors sold any kind of merchandise in any enlargement of the street. Local shops popped up here and there on endless, narrow streets. In other words, no other tourists wandered through the area. It was only me and the locals. 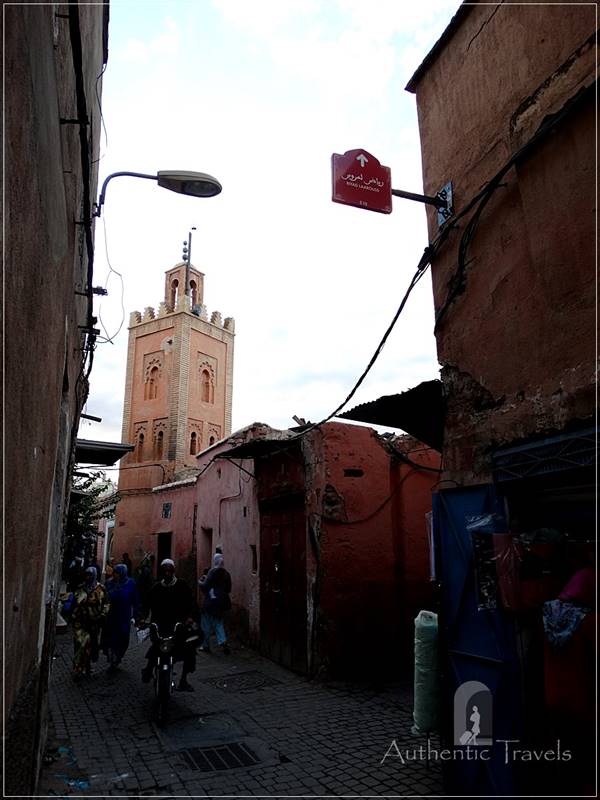 Meanwhile, I passed mosques, hammams, and public fountains from where people filled buckets with water. Nearby, tajines boiled on grills placed in the street, opposite to a stand with a pile of slippers for sale. Before reaching the main square, I passed the Ben Salah Mosque in a sordid neighborhood, where shabby houses lined bumpy streets. Sometimes, you could see dirt traces flowing out of the houses. Mohammed was concerned about me and called to find out where I was every five minutes. I didn’t know where I was either… 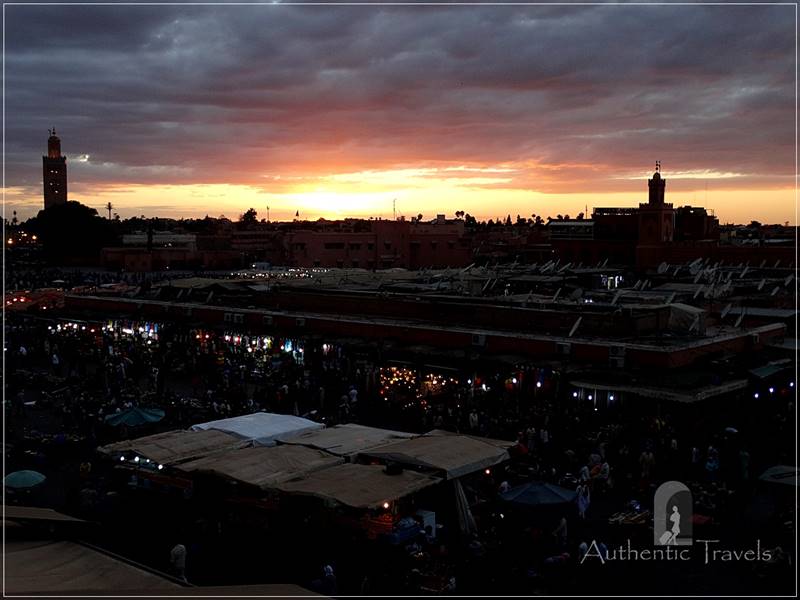 In Djemaa el-Fna Square, I found Mohammed at Café de France. Café de France – one of the square’s emblematic cafés, had a view of the square and the Koutoubia minaret. We enjoyed orange juice and some cakes and watched the sunset over the square. At that moment, the stalls in the square started to bustle and locals started to cook various local dishes in the street. They roasted all kinds of meats and fish and then drowned them in different sauces and spices. Later, we sat in a small group in the square, where a Moroccan wearing a djellaba recited a poem. I didn’t understand a word, but after the performance, Mohammed laughed and gave him a dime. People met in Djemaa el-Fna Square for any reason. To socialize, to dine, to watch a theater play, to listen to music, to admire local artists.

At 9 p.m., I met with Naima, who had just finished her English classes, and we took a cab back home.

14 Responses to “Marrakesh: the pink city – souqs and luxury (I) – Morocco”