The road from Todra Gorges to the Dades Valley

Short Description. In the Todra Gorges, a gendarme encouraged me to continue the road trip to Tamtattouchte village. In the afternoon, I reached the Dades Valley, where I couldn’t take my eyes off the 1000 kasbahs built of reddish mud-bricks.

In the camping-ground, I had breakfast with my two Spanish neighbors who traveled with a camper-van and had two hunting dogs. En route to Todra Gorges, I passed many official camping-grounds and traditional guesthouses, and gradually reached the sinuous valley meandering among high cliff walls. Houses in the villages were simple rectangular volumes standing on the rocky ground and featuring squared small windows and rooftop terraces.

The section of deep, narrow gorges spanned only for a few hundred meters and was free of tourist crowds early in the morning. I slowly drove through the gorges, and then a vast mountain scenery gradually opened up. Cultivated plots and lush palm trees lined the valley here and there. The road winded along the river and immersed into the reddish mountains. Eventually, it narrowed down, and I wanted to turn back when I reached a barrier with ’Route Barree’ (Closed Road) written on it. 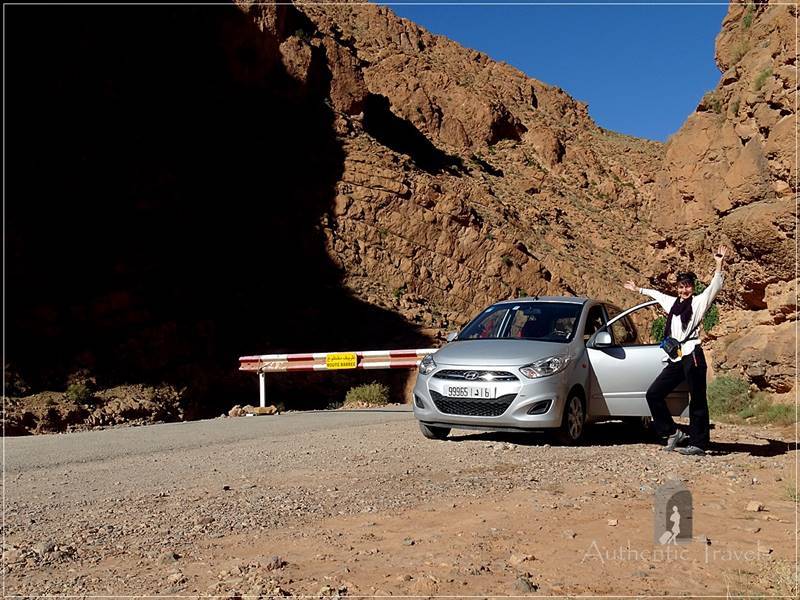 Todra Valley: the road almost ends, but the gendarme encourages me to drive further

A car of the Royal Gendarmerie appeared out of blue and stopped behind my car. The gendarme asked me whether something happened to me. Then he added: ’Je suis ici pour la votre securite’ (I am here for your security!). I felt awestruck and stared at him. Then I explained to him I would have liked to go to Tamtattouchte village, 12 kilometers from there, but I stopped at the barrier. The gendarme checked another car, which then eluded the barrier and drove across the riverbed. After that, he encouraged me to continue the same way, through the river. Moreover, he assured me everything should be just fine.

I felt fear. However, I took a few deep breaths and passed the shallow water of the river with my rented car. The road was partially destroyed and under construction, but it continued through a hypnotizing reddish scenery. Enormous rocky walls flanked the road that gradually got lost in the overwhelming immensity of the desert. At each turn of the road, a different scenery opened up in front of my eyes as I continued to immerse myself in the Kingdom of the Atlas Mountains. 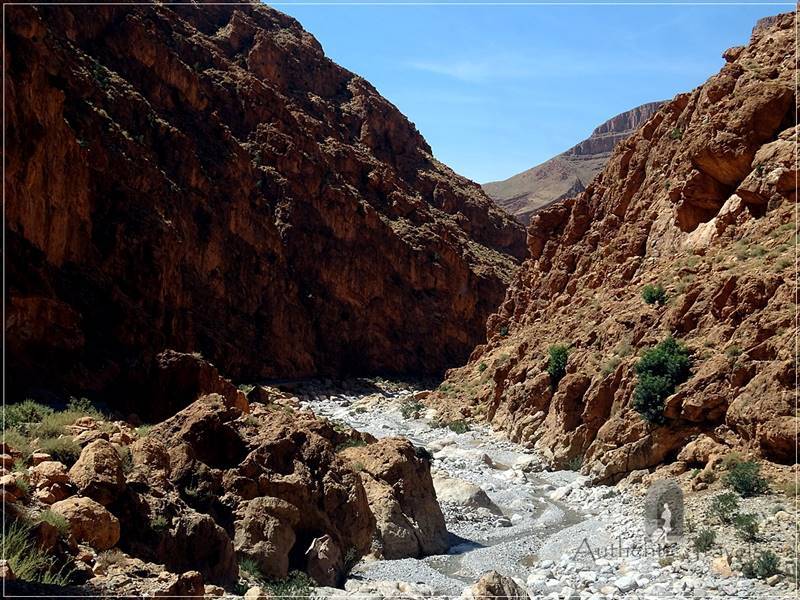 The road was a mixture of asphalt and gravel. I almost gave up and wanted to turn back twice when I had to cross through the riverbed again. I desperately stopped a German camper-van which came from the opposite direction and asked them about the condition of the road. The Germans encouraged me to continue with enthusiasm, though. They added that Tamtattouchte village was superbly surrounded by yellow cornfields in bloom.

I passed a small white mosque, then a herd of donkeys and goats. Eventually, I saw Tamtattouchte village on sight. The village featured mud-brick houses, surrounded by fields of maize and barren brown mountains. Berber people worked in the fields, and their donkeys were the only mean of transportation in the village. Hunchbacked women carried large bales of dried leaves from the fields to the village. I drove through the village, then reached a soccer field where children were playing joyfully. After I turned the car, I planned to leave Tamtattouchte. I was eager to get rid of the river crossings on my way back to the Todra Gorges. 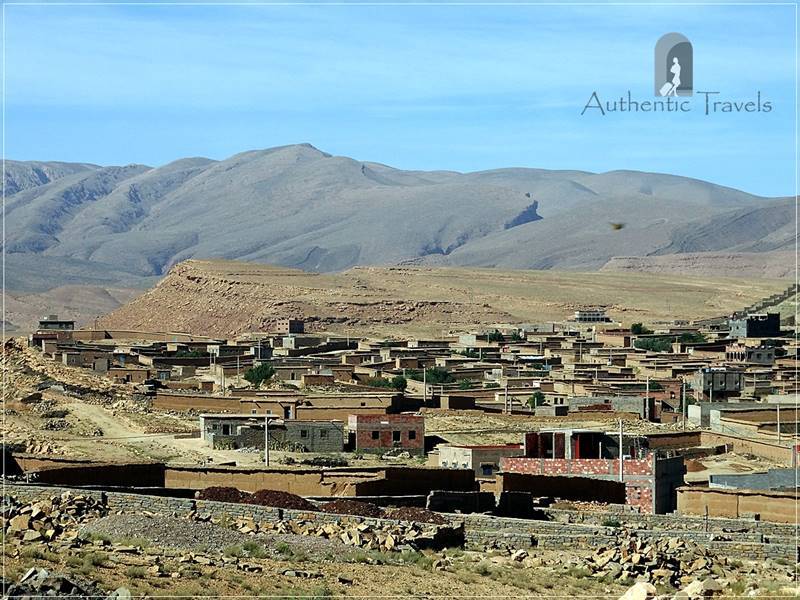 Tamtettouchte village: somewhere in the mountains

When I was taking the last photo in Tamtattouchte, a smiling woman came from the maize field and invited me to have tea on her terrace at Auberge Café. Aicha served me sweet Moroccan tea, cookies, and a pear under a large Berber tent overlooking the blooming maize fields. She wasn’t able to write down her name as she had never been to school. However, we managed to communicate somehow. She had a married daughter who lived in a nearby town and two grandsons. After having tea, she led me to the maize field, where she worked every day. She picked up some corncobs to cook for me. When we came back home, I gave her some biscuits and waffles. Eventually, I told her I had to leave because I had a meeting in the Dades Gorges. She looked after me very disappointed. 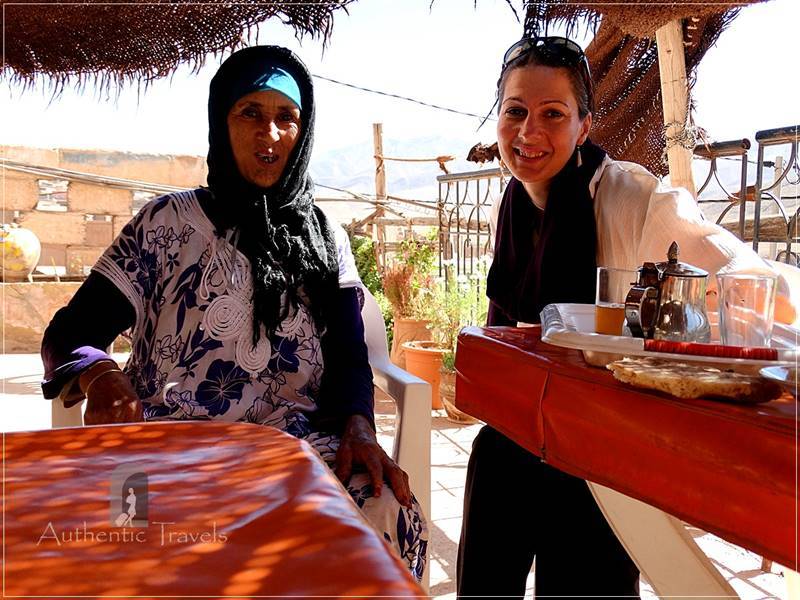 In the Dades Gorges, Mohamed from Marrakesh had arranged a free room for me in a cozy hotel. I passed the town of Boumalne de Dades and entered the Dades Valley – also called the ‘Valley of the 1000 Kasbahs’. For the next 25 kilometers, I constantly stopped in front of each impressive, picturesque kasbah built of reddish mud-bricks. You could easily differentiate the kasbahs from the uniform mass of the brown-reddish villages. 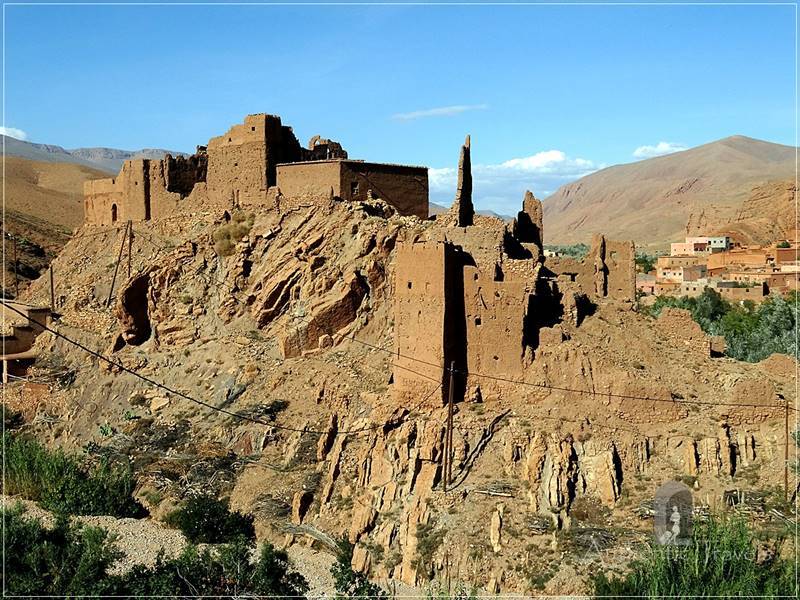 Dades Valley: another kasbah on a hilltop

The kasbahs had a more prominent volume, developed on several floors with geometric decorations and bordered with slightly detached defensive towers at corners. Alongside lofty minarets, imposing kasbahs silhouettes rose on hilltops or in the heart of green oases with fig, olive, or almond trees. The lunar-red scenery was barren but dotted with abundant, luxuriant oases here and there. Whenever I stopped, the children asked me to give them something. I did have something for them. However, they left disappointed when they felt the sour taste of my vitamin-C pills.

I was taking a break at the rock formation named the Monkey’s Fingers when Mohamed desperately called me and said the staff of the hotel was already waiting for me. I told him how much I liked the Dades Valley and that I would be late for sure. At Hotel Babylon de Dades, I had a Berber room overlooking the sheer valley, and the staff served me a delightful dinner at candlelight.

The road from the Dades Valley to Ouarzazate

Short Description. I drove one of the most dangerous roads in the world, the road through the Dades Gorges. In Kelaa M’Gouna, I witnessed how locals produced rosewater. I had lunch at a kasbah in the palmeraie in Skoura. In the evening, I camped between Berber tents and palm trees near Ouarzazate.

The last hairpin bends in the Dades Gorges are considered one of the most dangerous roads in the world. I drove slowly, with a maximum speed of 30 kilometers per hour, while Moroccans were overtaking me and talking on their mobile phone at the same time. At the end of the narrow road bends, I stopped at a panoramic terrace overlooking the entire Dades Valley. Then, I drove down all the Dades Valley to Boumalne de Dades. In the small town of Kelaa M’Gouna, I entered the distillery of Kadari Elhoucine. He showed me his rosewater distillery and other products made of roses. Eventually, he convinced me to buy soap, face cream, and jasmine perfume. 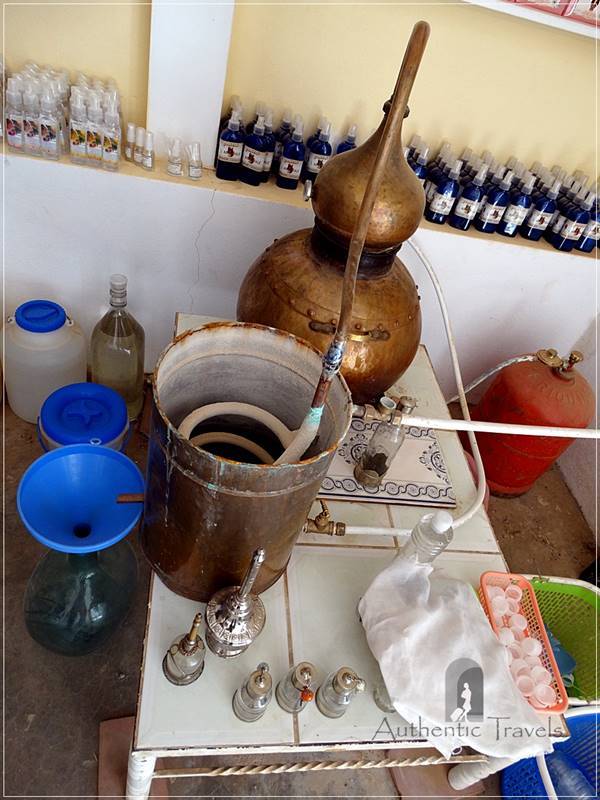 Skoura, also named the ‘Oasis of the 1000 palm trees’, featured an abundant combination of palm groves and mud-brick kasbahs built to protect the oases in the past. Monday was the souq day in Skoura, and peddlers were teeming the streets. Therefore, I had a hard time finding a parking spot on a side street after I sneaked among agitated crowds and animals. 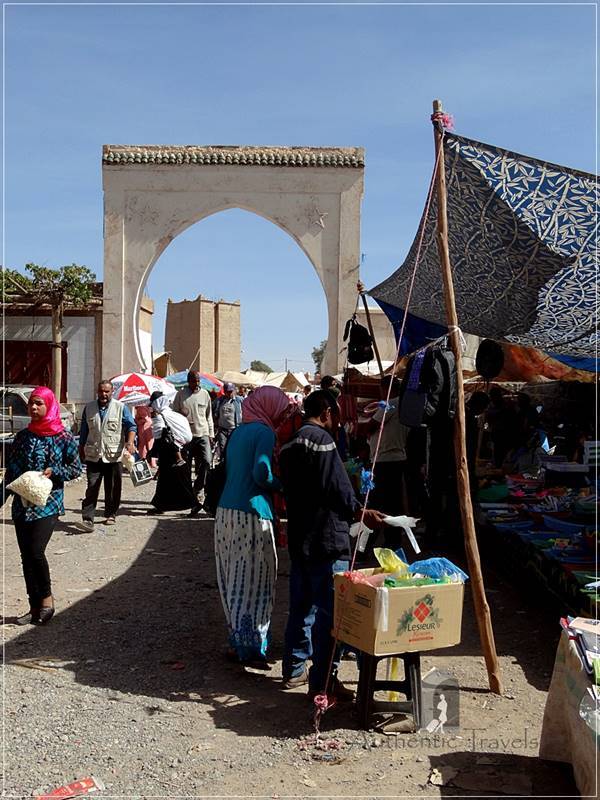 Skoura‘s town center with a bustling market was full of dust and local stalls, and it didn’t inspire me to eat there. Also, in the new town, lunch was unreasonable pricey. Eventually, I immersed myself into the thicket of the palmeraie and entered Kasbah La Datte D’Or. There, I negotiated a decent lunch (tajine, olives, salad, dates, pomegranates, and grapes). In addition to that, I convinced them to tell me the correct way to Kasbah Amridil, which I hadn’t found at all on the maps. 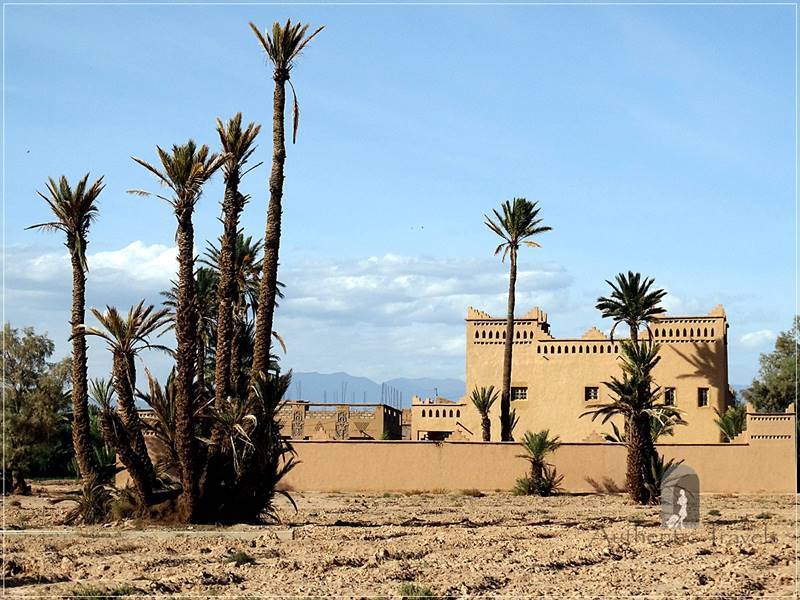 Skoura: kasbah in the palmeraie

Kasbah Amridil stood on the outskirts of Skoura, at the limit between desert and palmeraie. It had been built-up during the 17th century and was one of the largest and most coveted kasbahs in Morocco. It had several floors, intricate inner courtyards, and hidden terraces. Earth ovens for baking bread, old tools, olive oil press, and elaborated geometric decorations. The inhabitants of the kasbah slept on the ground on a mat which they rolled up each morning. In front of the kasbah, famished guides insisted on showing me the kasbah or the surrounding palmeraie. Anything, only to make little money.

After I passed the storage lake of El Mansour Eddahbi, I crossed Ouarzazate town. In the evening, I reached Camping Bivouac La Palmeraie, where I camped among camel-hair Berber tents, palm trees, and mud-brick huts.