Traveling the Draa Valley to N’Kob town – Agdz and Tamnougalt

Short Description. In Ouarzazate, I went to the kasbah in the town center and then to the old film studios. After that, I drove along the Draa Valley and stopped at the Caid’s family kasbahs in Agdz and Tamnougalt. Further on, I made a detour to N’Kob where I stayed overnight in a camping ground.

The city of Ouarzazate was the main commercial center in the region, and the artisans’ souq stood just opposite Kasbah Taourirt. In front of the kasbah, a new pack of insistent guides assailed me, and I had a hard time getting rid of them. The enormous kasbah had most rooms without furnishings but it had richly colored decorations – ceramic tiles, laborious stuccoes on the walls, as well as painstakingly painted wooden ceilings. I almost got lost amidst the dozens of courtyards, terraces, and intricate floors in the kasbah. 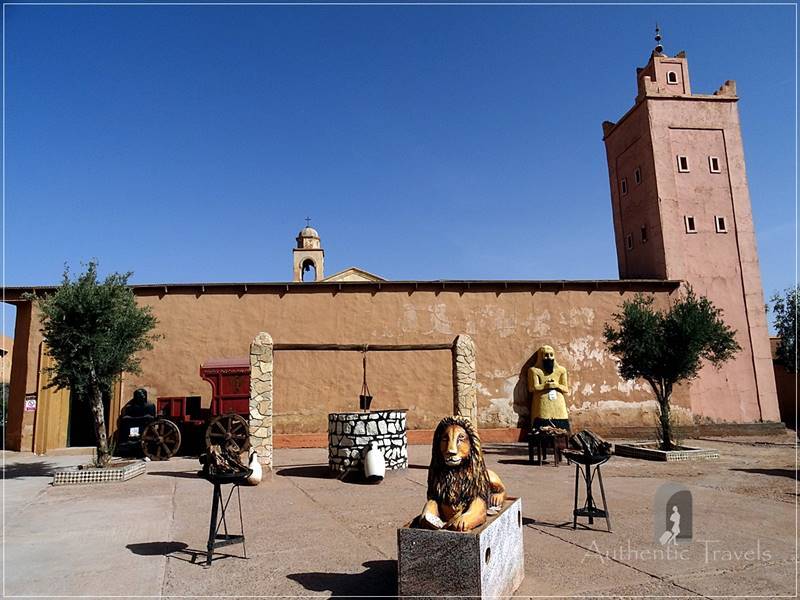 Numerous movies had been cast in the kasbahs in the area and the Atlas Film Studios in Ouarzazate. A few former rectangular mud-brick studios hosted the Cinema Museum and had dusty cardboard decors with mottled colors. Most of the rooms displayed various film scripts, with music and historical characters, medieval costumes, sphinxes, lions, and winged horses.

From Ouarzazate, the road along the endless Draa Valley went to the Sahara Desert. The desert scenery scarcely dotted with isolated palm trees undulated along the ridges of gentle hills, among which the road meandered infinitely. Lush green oases burst along the valley in places where water sprang after coming as far as from the High Atlas Mountains. Defensive kasbahs had been built in the proximity of the oases as outposts on the caravan routes. Their role had been to protect the oases (valuable places with water sources) and to stop the French colonization. 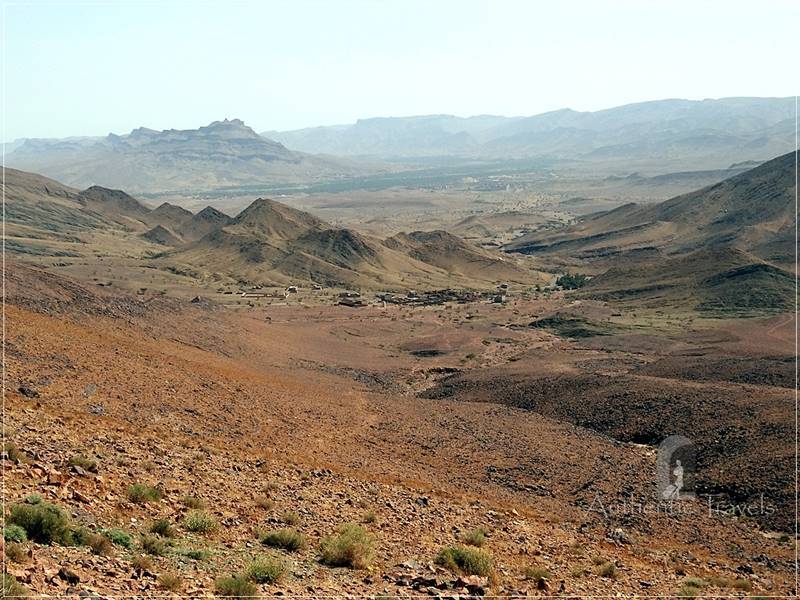 The road from Ouarzazate to Agdz

Numerous mud-brick kasbahs were perfectly preserved in the palmeraie of Agdz. At Kasbah Caid, Rachid (a member of the Caid clan) guided me through the rooms of his family kasbah. The Ait-el-Caid clan, a noble family, had 250 members. They all met only at weddings and parties taking place in the vast courtyard of the kasbah. Besides, the family owned four other kasbahs in the region – all of them still inhabited.

The kasbah in Agdz had 40 rooms, but only 14 persons lived there at that moment. Rachid’s grandfather had been a wealthy man and had afforded ten wives. Each wife took care of all children of the family (including the children of other wives). Eventually, Rachid said that he and his cousin, Talal, had had a small role in the movie Babel starring Brad Pitt. 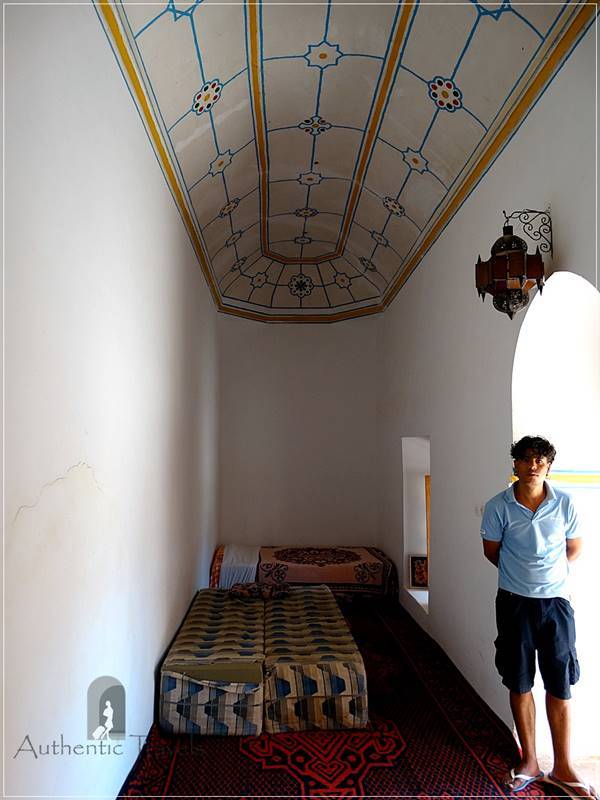 Agdz: Ait El Caid family kasbah. Rachid was my guide, and he told me he played the scene serving tea to Brad Pitt in the film Babel

Rachid also sent me to Tamnougalt – a fortified village dating back to the 16th century, where his cousin showed me another kasbah of the Caid family. Talal dusted himself off when he stood up from the ground. Then he guided me through the corners of his family kasbah.

The kasbah in Tamnougalt was the first one built in this area during the 16th century, but only 24 members of the family lived there at that moment. They slept on mattresses directly on the ground and baked bread in earth ovens. Moreover, Talal explained to me the differences between the Arab, Andalusian, and Berber architecture – all three being visible in the three inner courtyards of the kasbah. After that, Talal showed me the surrounding ksar, and then another neighboring kasbah refurbished as a guest house. Eventually, he gifted me a pendant with a colorful embroidered small Arabic slipper. 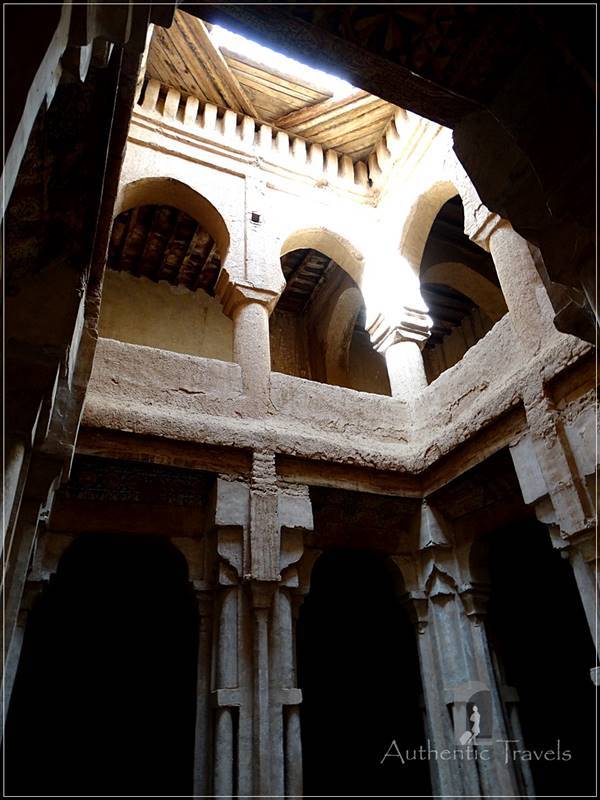 From Tamnougalt, I made a small detour through a desert area where wild camels randomly walked on the side of the road. Eventually, I reached the town of N’Kob – called the ‘Town of the Oases and the 45 Kasbahs’. At Kasbah Baha Baha, a Moroccan dressed in a white djellaba accompanied me like a wandering ghost through the rooms of the kasbah. The kasbah had a large garden with a swimming pool, Berber tents, and a small ethnographic museum. The main building featured many stylish guest rooms carefully designed with Berber decors.

In the evening, I went to Camping Ouadjou on the outskirts of N’Kob, where I was their only guest. A cat stuck to me during the whole evening, and the staff spoiled me with two kinds of tajine in the pavilion near the beautifully illuminated pool.

Traveling along the Draa Valley – from N’Kob to Zagora

Short Description. I explored the kasbahs scattered amidst the oases in N’Kob. Then, I returned to the Draa Valley and stopped at the kasbah-museums in Oulad Othmane and Ksar Tissergat.

I felt sick after eating the kefta tajine (a mixture of minced meat and vegetables) the previous evening. Nevertheless, I wandered among some of the 45 kasbahs scattered throughout the palm oases in N’Kob. On the main street, I noticed different meats exposed in the sun and thus understood the reason for my food-poisoning. On secondary streets, with sand and a lot of dust and debris, an enclosure of a fortified fortress surrounded by palm trees appeared all of a sudden. Imposing luxurious kasbahs rose next to dilapidated houses and defied any expectation. 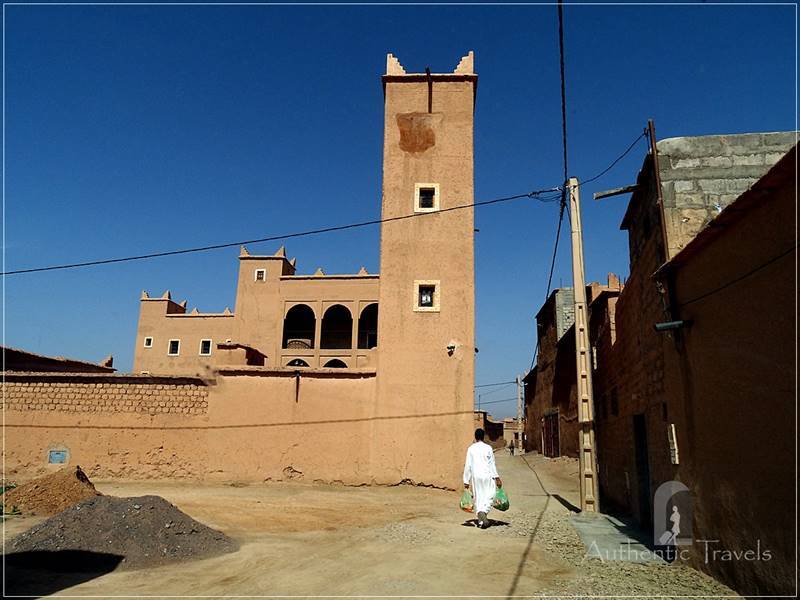 From N’Kob, I returned on the same route to the Draa Valley and continued farther south along the valley rich in vegetation, ksars, and kasbahs (more than 360 throughout the valley). The Draa Valley was the second-largest palm grove in Africa. It had been the main route for trading caravans traveling between Saharan and Sub-Saharan Africa (Timbuktu in Mali, Niger, and Senegal) toward North Africa and Europe. The inhabitants lived on agriculture (dates, henna), sheep, and camel herding.

It was hot, and I had to turn on the air conditioning inside the car. Locals themselves didn’t do any work and, most of the time, I saw them lying in shade. Children always asked me to give them something to guard my car or show me the direction to wherever I wanted to go. Oulad Othmane featured a kasbah where dirt and poverty, as well as heat and dust, seemed present everywhere. 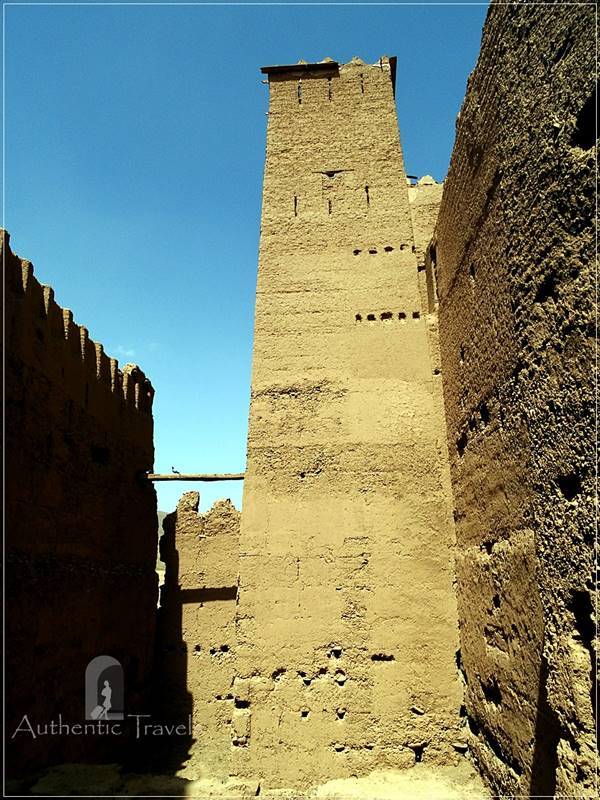 The houses in the ksar seemed pretty dilapidated while only the mosque was carefully taken care of. A lad convinced me to be my guide through the 18th-century kasbah of the Aziz Chafik family. The members of the family still lived there even though the place seemed deplorable (they slept directly on the ground). Nevertheless, the inner courtyards and the rooftop terraces surprised me with their remarkable architectural decorations. Many areas fell apart but from the rooftop terrace, there was a great panorama of the entire ksar and palmeraie.

The chain of oases continued toward Zagora. I made the last stop in Ksar Tissergat at the Museum of Arts and Traditions of the Draa Valley, refurbished in Kasbah Ziwana. I entered a covered, dark street in the ksar, where I had to wake up the guard to open the museum. The museum displayed traditional objects, such as wicker baskets, saddles for camels and donkeys, comb locks for doors. False-work for cob buildings made of mud and straw bricks (the techniques leuh or tabout). Medicinal plants, natural cosmetics, musical instruments. And, of course, countless ways to carry and store water in the desert. 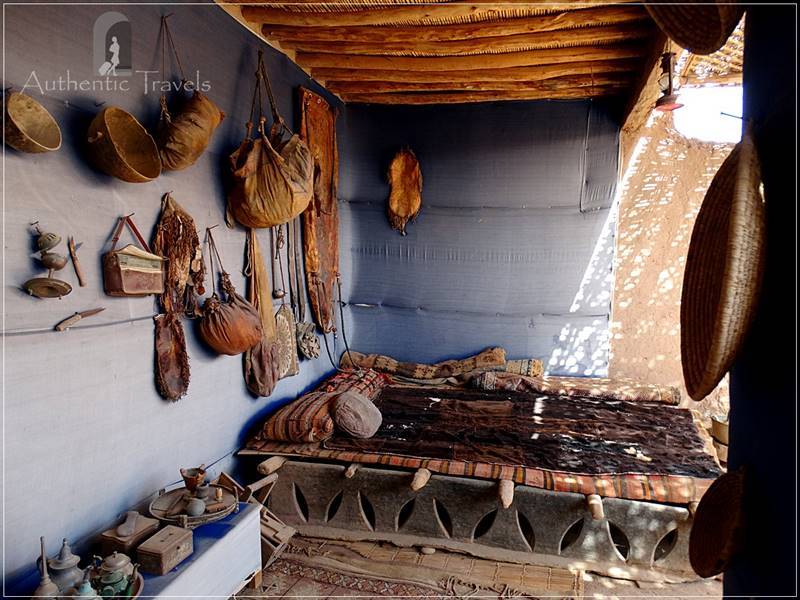 In Zagora, the Royal Gendarmerie stopped me on the right side of the road. I explained to them that I didn’t speak French too well. They checked my documents and let me go.

Zagora, a town close to the border with Algeria, had been an important outpost on the desert route. On the outskirts of the town, a dusty sign contorted by winds pointed the direction toward Timbuktu, Mali – only 52 days by camel. At the traffic lights, a Moroccan driving a dirty jeep insistently honked me and then followed my car to sell me various desert trips. I completely ignored him. 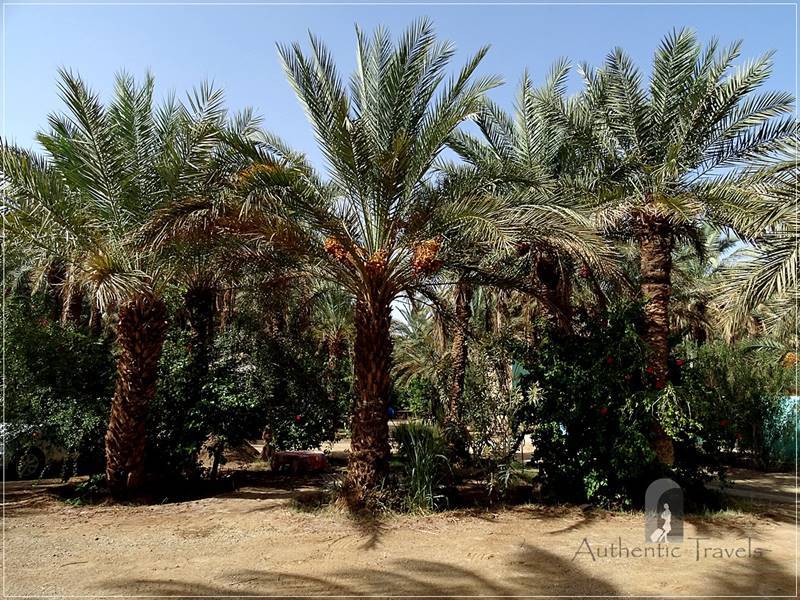 I went straight to Camping Oasis Palmier, located at the exit from Zagora. There, I camped under a palm tree and spent the whole evening swinging in a hammock. I felt a little fearful but impatiently waited for the desert expedition starting the following day. I had planned a 4-day traverse of a desert area by camels – a dream of mine with camels, dunes, Berber tents, oases.

30 Responses to “Traveling the Draa Valley to Zagora, with a detour to N’Kob – Morocco”