Short Description. I left Marrakesh and on my way to Essaouira, I stopped at several argan oil cooperatives. In Essaouira, I stayed like a princess in an authentic and luxurious riad.

In the morning, I left Marrakesh after the traffic calmed down and headed to Essaouira, the historic port at the Atlantic. Gentle brownish hills, quite arid but sprinkled with scattered argan forests, dominated the region. The argan forests of southwestern Morocco (declared a nature reserve – arganeraie) grew at the border with the Sahara and constituted a natural barrier against the desert’s extension. Although not tall at all, the argan trees had rich crowns. Goats liked the argan fruits and climbed on the trees to eat them. On the side of the road, an argan tree was full of goats that looked at me with astonishment. The truth was that Berbers climbed the goats in the tree to attract tourists. Then they charged tourists for taking pictures of the goats or tried to sell them argan products. 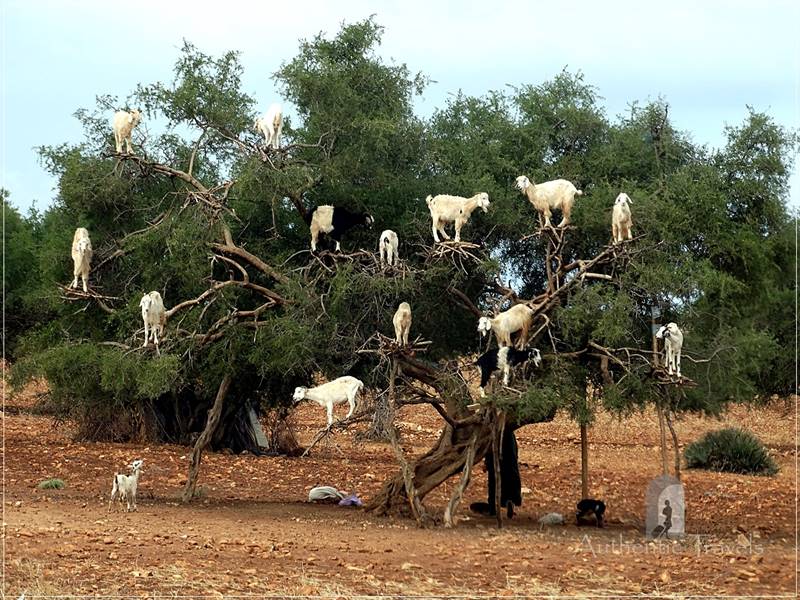 At the Argane Beladi cooperative, I saw a wide range of argan-based products – from cosmetics and medicines to food. A little further, at Assous Argane, I witnessed the manual process of extracting argan oil from argan fruits. The process was included on the UNESCO intangible heritage list for the way these ancestral practices had been preserved.

Several women sat on the floor and exemplified the main stages of the traditional argan oil extraction process. The first one cracked each argan fruit shell with a sharp stone. The second one used a manual rock grinder and thus grounded the lightly-roasted kernels into a thick brown oily liquid. The third woman mixed the argan paste with warm water. Then she hand-kneaded it to bring pure, unfiltered oil up to the surface and filter it. For cosmetics, the women peeled off the argan fruits only once and then roasted them. For food products, they peeled off and roasted the argan fruits twice. Argan oil is the most expensive edible oil in the world ($300 per liter) and a liter of oil requires 20 hours of manual labor. 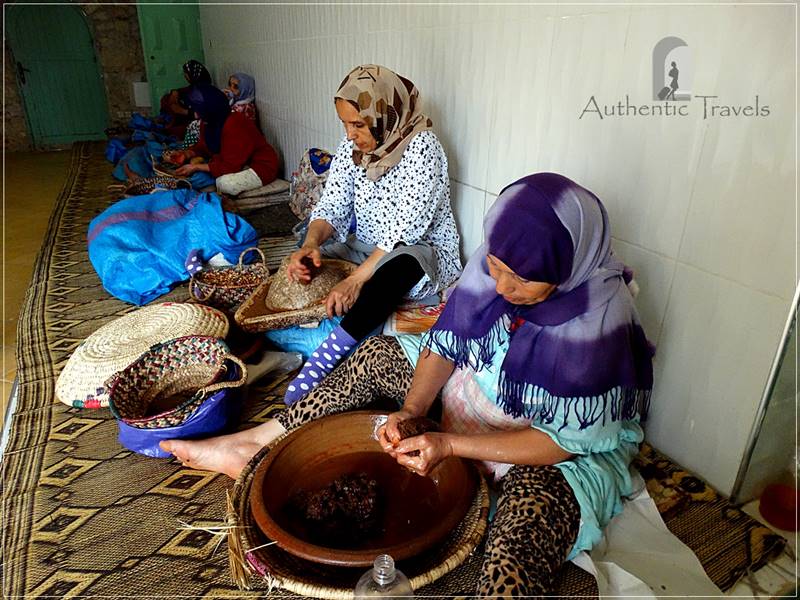 At Afous Argan cooperative, I tasted bread with argan honey, almond butter, and spreadable amlou paste (a mix of argan oil, honey, and almonds). A nice Moroccan women who worked at the cooperative insistently smiled at me. Eventually, she convinced me to buy an eye-contour cream with organic argan oil and a small jar of amlou almond paste.

In Essaouira, I had booked a room at Riad Salmiya Dune, an authentic riad located outside of the medina. On the ground floor, the riad had an inner courtyard surrounded by arches, with a rippling fountain and a decorative exotic tree in the middle. At the top, a glass skylight covered the courtyard. At the upper floor, my room had a light-beige tadelakt finishing, a huge wrought-iron double bed, antique furniture, and modern paintings with Berbers wearing turbans. The shared bathroom had a brown, slightly-iridescent tadelakt finishing on walls, sink, and bathtub. 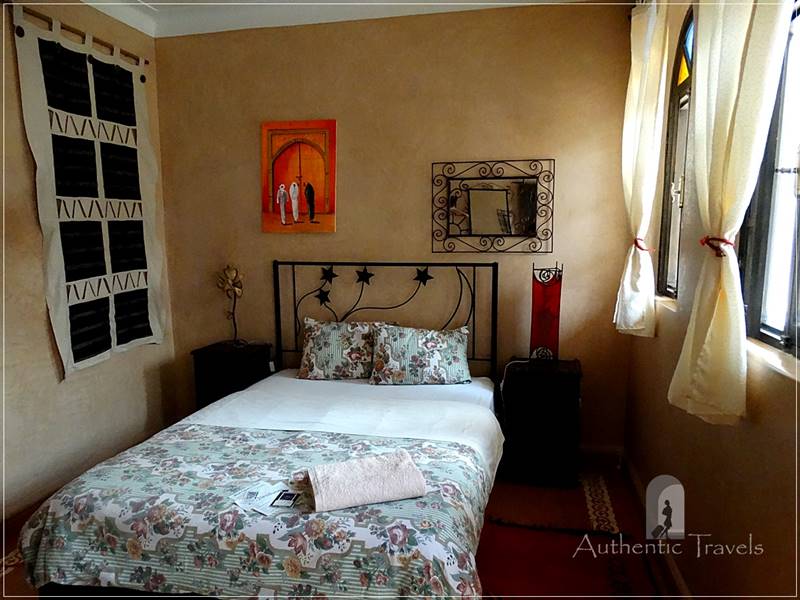 In the afternoon, I had pastillas with fish and avocado-orange juice at Café Nadawi’s in the corner of my riad’s street. As soon as I reached the ocean, the fish abundantly appeared in the local menus.

Short Description. I crossed the new town and in the medina, I went to Skala de la Ville, Sidi Mohammed Ben Abdallah Museum, Rabbi Haim Pinto Synagogue, and Skala du Port. A heavy rain caught me on my way home.

At Riad Salmiya Dune, the French owners served me a generous and hearty breakfast (tea, bread, pancakes, different fruit jams, cake, the customary melted cheese). I talked to the German couple who stayed in another room in the riad and thus found out he had gotten a 300-Dh fine for speed driving.

White or light-hued houses, with porticoes on the ground floor, lined the streets of the new city. I passed a red-pavement square, bordered by buildings on four sides, and a few benumbed palm trees. Along the ocean promenade, I strolled a large boulevard with villas that featured a combination of French architecture and Arabic influences, as well as the ocean-like blue color for gates and shutters. A wind (taros) blew continuously throughout the city (Essaouira – ‘windy city of Africa’). Palm trees bent by this wind lined the deserted beach. A camel ride along the beach was always a choice, though. 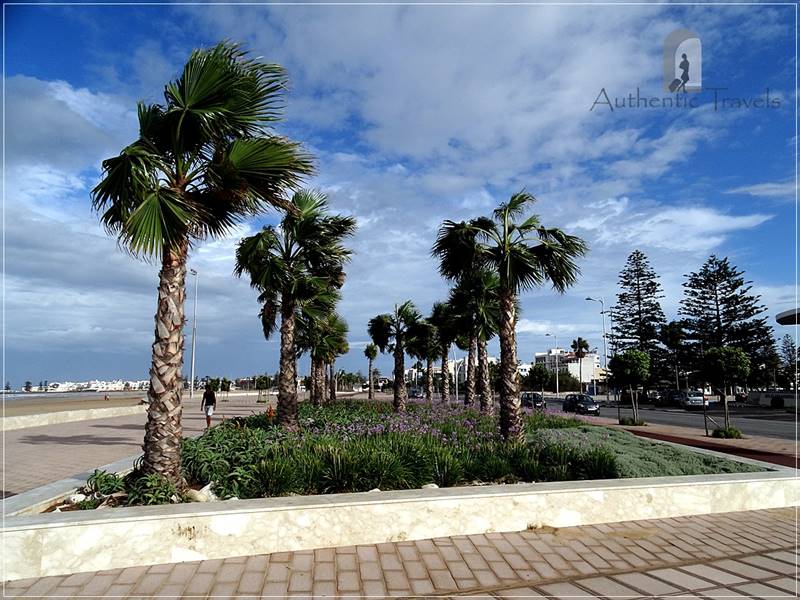 The windy beach in Essaouira

The entrance gate to the medina sat opposite to the Mohammed V Boulevard. Bab es-Sebaa, a red gate with decorative finishing of apparent stone, continued with crenelated fortifications that surrounded the medina. After Morocco’s opening to the rest of the world in the XVIIth century, a French architect designed the medina in Essaouira (listed as a UNESCO site) according to the principles of the European military architecture. The medina featured fortification walls, ditches, and bastions specific to the Vauban-type fortresses.

Essaouira was a genuine example of a fortified maritime city from the XVIIIth century, an important trading center at the Atlantic. It had been an international port (called ‘the Timbuktu port’) that connected Morocco and sub-Saharan Africa with Europe and the rest of the world. Compared to other Moroccan medinas (a true labyrinth of streets, alleys, and gangways), the European principles influenced this North-African medina. Therefore, the urban space in Essaouira featured well-defined public spaces, main commercial streets, with a carefully designed perspective (minaret, tower). 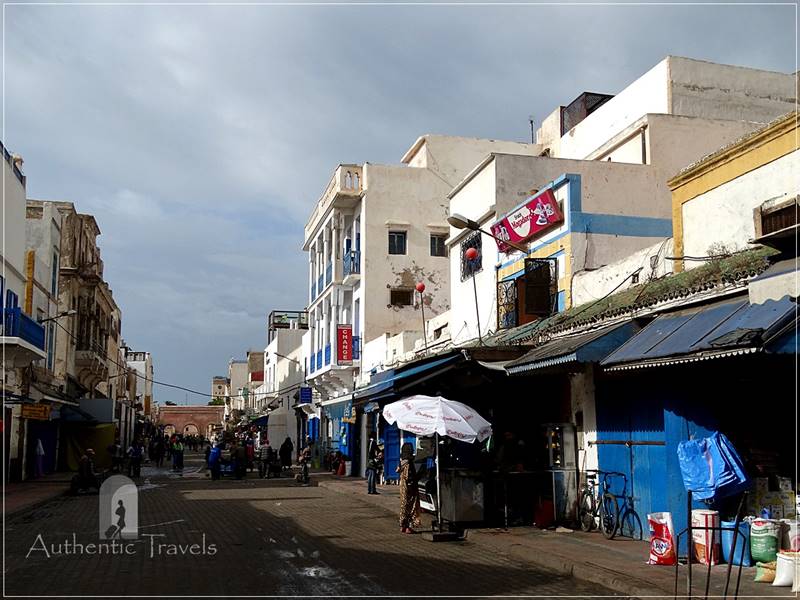 The medina in Essaouira – the main pedestrian street

The medina’s main streets were wide enough for cars to enter (only residents’ cars though). Several-floor dwellings had animated blue gates and shutters, sometimes with Arab-ornament frames. Berber colorful carpets covered dark and deserted gangways. At any given moment, a Moroccan holding a tea tray crossed the street. Packed out with merchandise, Ave de l’Istiqlal ran through the medina from Bab Doukkala to Bab al-Minzah. Blue, the emblematic color of port cities, dominated almost all the entrances, shutters, and window frames. Sometimes, meticulous stuccoes or colorful mosaics (zellij) doubled these blue-dominated surfaces. At times, gates built across the street created vaulted passageways. A man asked me why am I taking so many pictures and where I come from. When I said I was an architect, he complained about how difficult it was to restore houses in the medina. 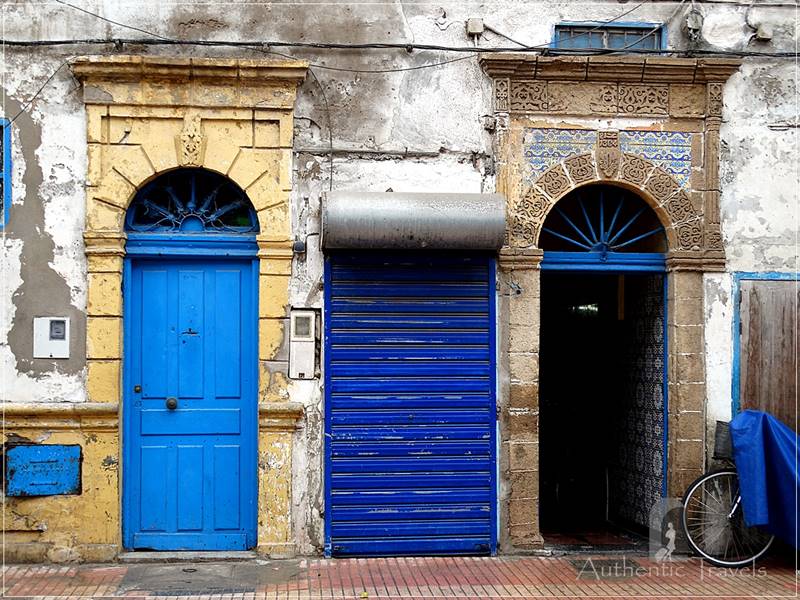 Lean cats squeezed fearfully under motorbike wheels or hid in dark corners. The narrow, winding streets of the medina managed to break the winds that blew powerfully throughout the city. On a pedestrian street, merchants were sitting on a chair in front of their shops and waited for potential customers. Skala de la Ville was one of the main bastions of the medina. It had many entrance ramps, platforms, and corridors with sea-oriented cannons. On the other side of the walls, though, lots of rubbish filled the residual space between the fortifications and the sea. The sea was agitated and thick grey clouds were quickly approaching the city. 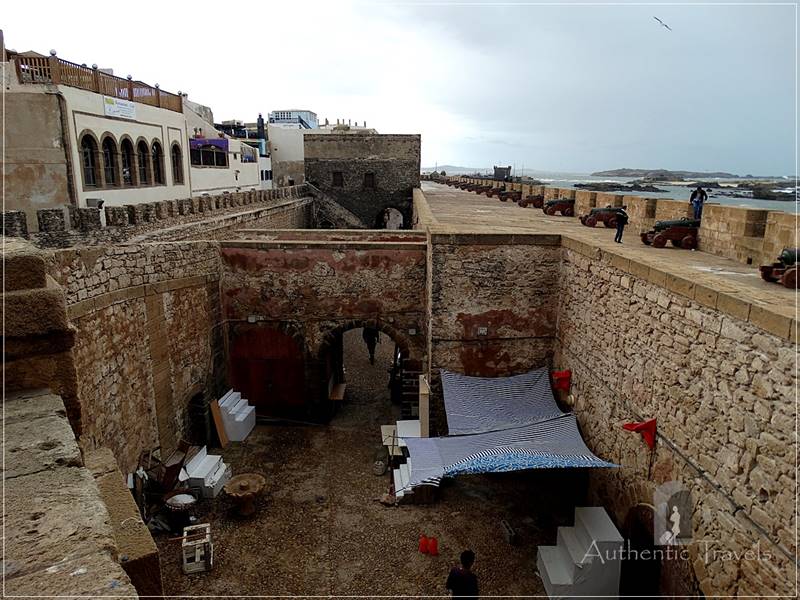 Housed in a traditional merchant dwelling, the Sidi Mohammed Ben Abdallah Museum stood as the main museum in the city. It had a large central staircase, with blue railings, which climbed from the double-arched inner courtyard to the second floor with a loggia. The museum exhibited weapons, silverware, folk costumes, and musical instruments (squared guitars – gnaoua and drums – hmadcha).

In the XIXth century, the medina also included a new Jewish quarter (mellah). When more and more Jews started to come in the city, the sultan had ordered the construction of a special neighborhood for them, as an extension of the medina. All of a sudden, I noticed a poorly-dressed man with red eyes who followed me through the mellah. I stopped at a store and started to chat with the owner until the man with red eyes got lost in the crowds. Then I immediately entered the Rabbi Haim Pinto Synagogue, a small building with a lot of blue on the interior walls and faience with large decorative diamonds. 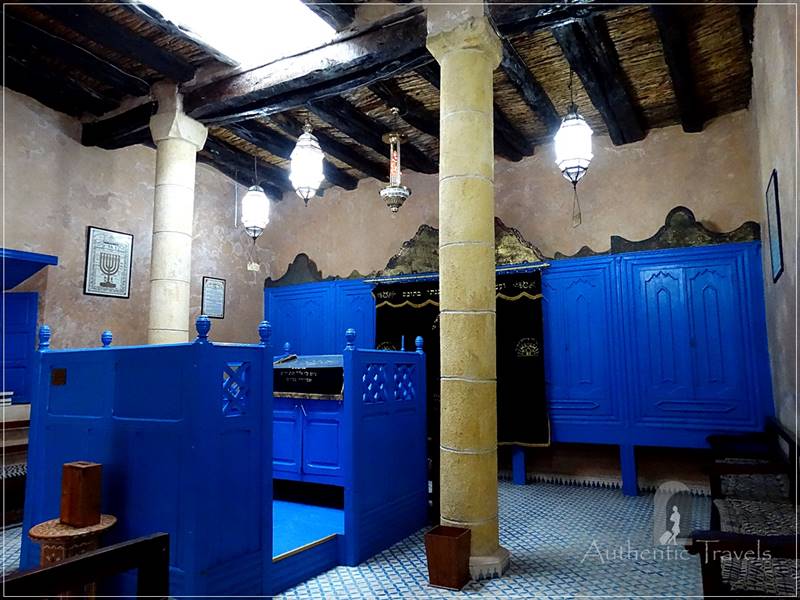 From Bab Doukkala I returned on the main pedestrian street flanked by collonades packed-out with merchandise. After I passed the Kasbah Mosque, I headed to the port and shortly stopped in Moulay Hassan Place, a square with many pavement terraces and restaurants. Next to the square, the fish market offered a wide range of fish – all colors, sizes, and origins. One could buy the fresh fish and then grill it on a barbecue in the street or at home.

The old medina in Essaouira – the fish market

At the end of the pier, I reached Skala du Port, the bastion overlooking the sea. Fat, fearless seagulls heroically resisted in the harsh wind on the pier. I wanted to have lunch at a restaurant in the medina. However, on my way back from the bastion, it rained cats and dogs and I soon was wet through. Everybody flagged down a taxi and I couldn’t find any available taxi to get to the riad. Eventually, I left the medina on foot and hoped to find a taxi on the way home. 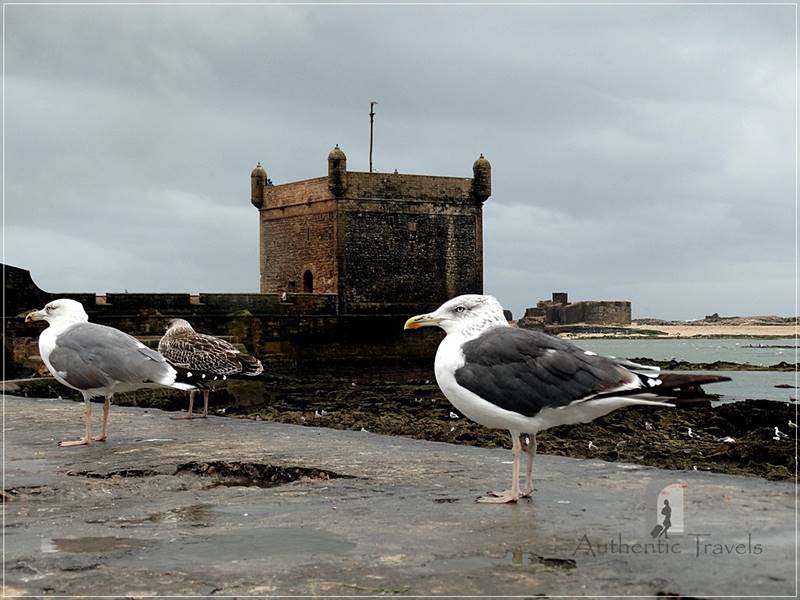 When I crossed the streets, the water was half-meter deep, almost up to my knees. All these happened because the city’s sewage couldn’t handle such a big quantity of water. When I arrived at the riad, I was soaking wet. My sneakers and clothes were completely wet too and I had to dry the sheets of my notebook one by one. Then I took a hot bath in the luxurious bathtub with tadelakt finishing. I spent the evening in the riad and ordered food from the corner cafe.

At night I put my sneakers and pants near a heated radiator I borrowed from the shared bathroom. But I had to wake up to turn them on both sides every two hours. In the morning, the sneakers had almost dried up. The pants had dried too, but they were burnt in a few places (the rain sacrifice in Essaouira) because I placed them too close to the radiator.

If you want to read more about my trip through Morocco,here are all my Travel Diaries from Morocco (x21).

Have you been to Essaouira or plan to go there? Leave a comment below this post and tell me what you liked in Morocco.