The hidden surprises of Midelt

Short Description. Near Midelt, I went to Kasbah Outhmane ou Moussa, then to Kasbah de Myriem – the Notre Dame de l’Atlas Monastery and a local workshop with Berber carpets and embroideries. I passed the Ziz valley and gorges and stopped at a camping between the towns of Erfoud and Rissani.

Even though it seemed dirty and filthy, Hotel Bougafer surprised me with a hearty and tasty breakfast (omelet and crepes) served on the hotel’s terrace. As I had enough dust, shabby houses, and pushy men who always tried to sell me something, I decided to not go to the souq in Midelt. Instead, I headed to the Kasbah Outhmane Ou Moussa – a small nearby village, fortified by mud-brick tall walls. The kasbah had narrow pedestrian streets, rudimentary houses, and markets set up on the ground.

Near Kasbah de Myriem, I entered Atelier du Tissage & Broderie Berber, a Berber weaving and embroidery workshop. La Maitresse (the landlady) Nicole was a French-born in Midelt. Her family, the Debono clan, had already been living in Morocco for three generations. She encouraged me to take photos of her employees – local women embroidering large table clothes or weaving carpets on big wooden looms. 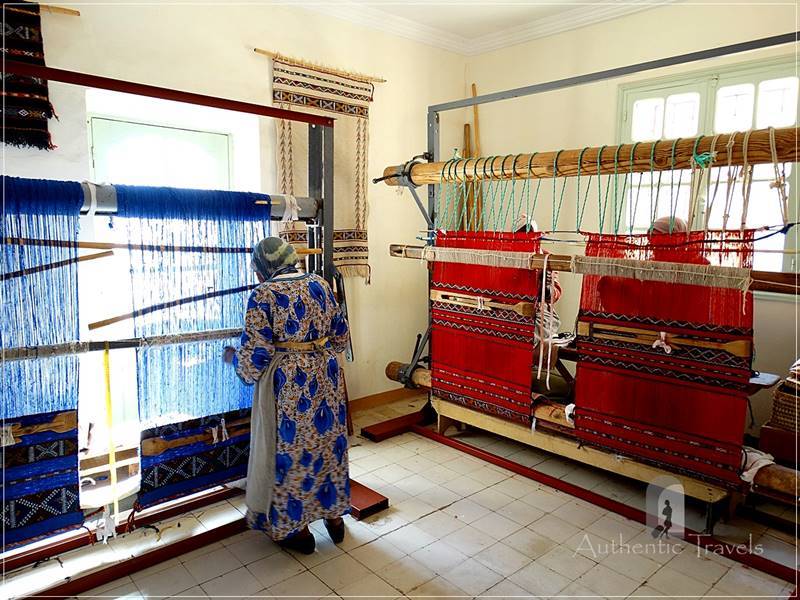 Across to the carpets and embroidery workshop, the Kasbah de Myriem stood as a former mud-brick fort transformed into a Catholic monastery at the beginning of the XXth century – Notre Dame de l’Atlas. The Catholic church inside the fort was later built of mud bricks, in the traditional style of the region. Once I entered the kashbah, the guardian asked me to wait and he went to call Pere Jean Pierre. As I didn’t know the history of the place, I wanted to take some pictures and leave. However, a tiny monk appeared out of the blue. Pere Jean Pierre had serene eyes as blue as the sky. He was warm and close with everybody and smiled discreetly. He started to talk with me in French, with a calm voice. I changed my mind right away and stayed to talk with him. 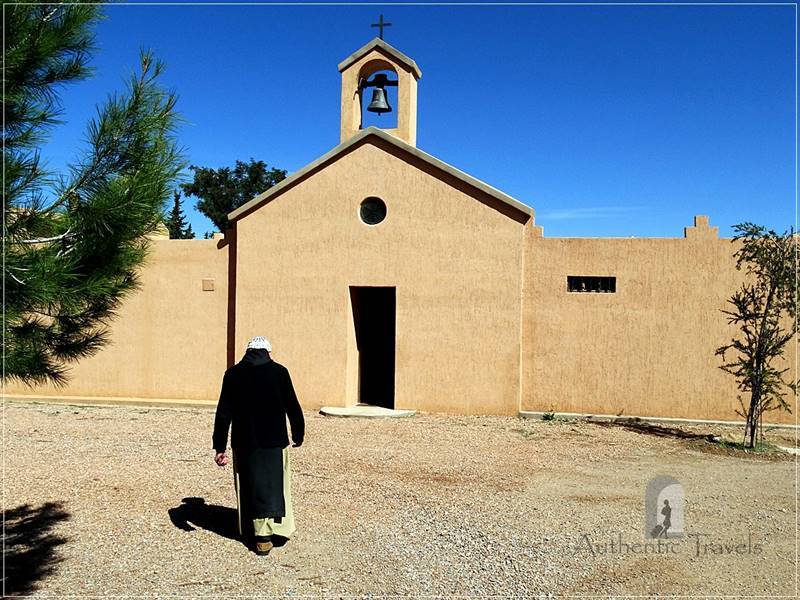 Pere Jean Pierre was one of the two survivors of the massacre of 21st May 1996. The massacre had been performed by the rebels over the monks of the Tibhirine Monastery (which means ‘garden‘) in Algeria, during the civil war. I couldn’t believe what was happening to me! How was it possible to meet such a personality!? A man who had overcome such a tragedy and yet had such a serenity!? Pere Jean Pierre was 91 years old. In 1996, he came to Fes, where he had a small monastery. Then in 2000, he came to Midelt at the current monastery, from where the nuns had recently moved to a nearby location.

Pere Jean Pierre slowly walked in front of me and showed me the monastery (the church, the library, and the chapel). The chapel with Berber decorations had been later extended in the Romanic style. The bell of the church had been brought from the church in Midelt when that one closed. Originally, the monastery belonged to Cistercians, but at the moment of my visit, five Franciscan monks lived there. Sister Theresa spent all her life in this monastery. A photograph of her stood as proof in the monastery’s chapel. When we entered the church, Pere Jean Pierre showed to me the oratory built in honor of the seven brothers killed in the Tibhirine Monastery in Algeria. The movie ‘Les Hommes et le Dieux’ evoked the painful memory of this event. 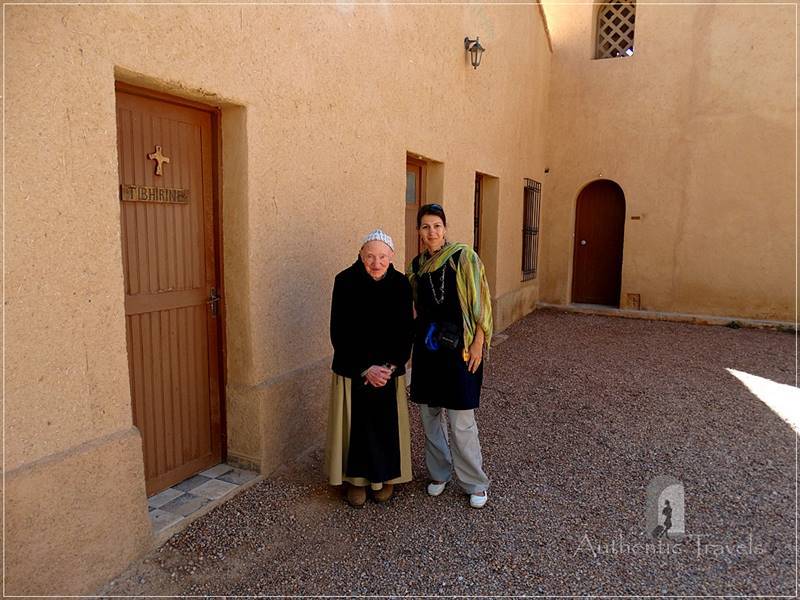 After that, Pere Jean Pierre showed me another oratory built in the honor of two monks who lived in the monastery. They had been hermits in the desert among the Berber tribes (a very interesting combination of Christians and Muslims). Their names were Pere Foucault and Pere Peyriguere. Pere Jean Pierre made me feel love. He filled me with calm, patience, and understanding. I felt peace and an unexpected joy, without any reason. His presence meant everything in that monastery. How had I wanted to leave without meeting him?!

The road from Midelt toward Erfoud and Rissani towns went along the Ziz Valley and Gorges. Fortified villages (ksar/ksour) with traditional mud-brick houses resembling fortresses were scattered along the road. Trees were very rare, while sheep and goats managed to graze a few surviving dried herbs here and there. The road started to climb in tight bends through a reddish rocky landscape and narrowed as it approached the Ziz Gorges. It passed a mud-brick mosque with a green minaret and some more-or-less deserted ksars. Before the entrance to the Ziz Gorges, I stopped at Kasbah Douna to recover a bit from the heat. 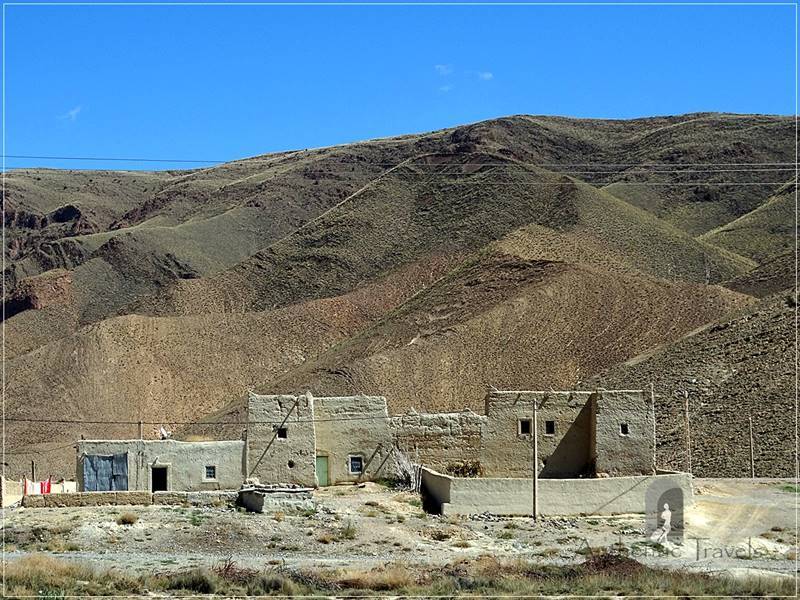 Crossing the High Atlas Mountains: the first mud-brick ksar in the area

After passing the settlement of Er Rich, palm trees became the main form of vegetation in the area, alongside some low acacias and dried shrubs. The road passed through the famous Tunnel du Legionnaire (Tunnel Zaabal) – a natural rock arch, from where it further snaked through the reddish Ziz Gorges (approximately 30 kilometers long). A brownish water, the river Oued Ziz (mostly dried up) flowed down in the valley and a few tufts of grass barely grew on the riverbanks. After the tunnel, a formidable ksour lined the route along the valley. All of the ksours had the same brownish mud-brick architecture, resembling the volume of a fortress. 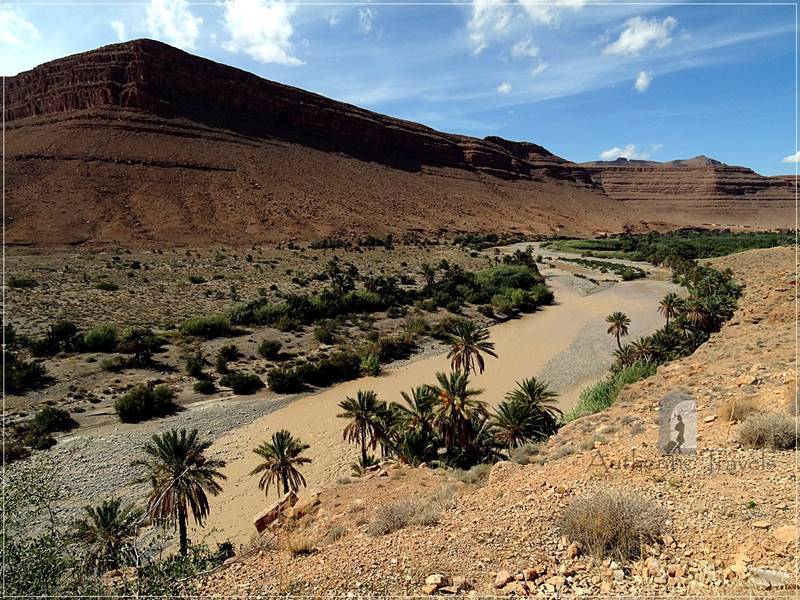 After the Hammat Mulay Lake, the road crossed the military garrison city of Er Rachidia, which had mud-brick fortified walls. The town dated from the French Foreign Legion period when it kept an eye on the nearby border with Algeria. Further on, the Ziz Valley widened and a necklace of oases with palms opened up, with numerous ksars scattered throughout the palmeraie. The road moved away from the course of the river and followed a contour line along the Ziz Valley, overlooking the dense palm forests in the valley. After passing Erfoud, I stopped at Camping Tiffina, where I pitched my tent among palm trees, Berber tents made of wool, and brownish cottages built of mud-bricks. 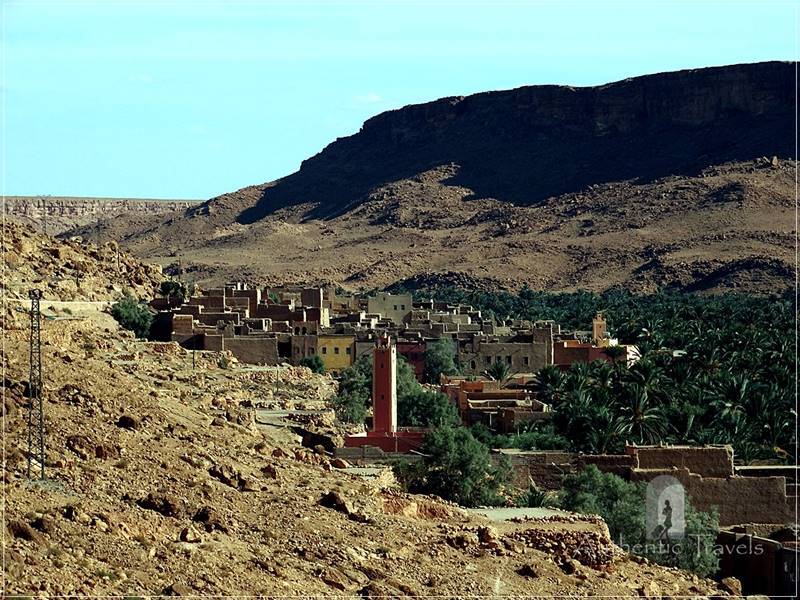 Ziz Valley: ksar in relation with the palmeraie

Short Description. From Camping Tiffina, I took a half-day round trip to the mud-brick fortified villages (ksar) in the Tafilalt Oases. In the afternoon, I relaxed at the campsite pool.

En route to Merzouga, the Tahiri Museum of Fossils and Minerals had a courtyard packed with all kinds of rocks from the surrounding mountains (~100km away). Each type of rock had a different color and had been extracted from an area with a rich geological heritage of fossil beds. Brahim, the owner of the museum, told me the southern part of Morocco had plenty of fossils. To see what was inside the rock and to reveal the fossil, one carefully removed a part of the rock using fine tools (similar to the ones used by dentists – Brahim laughed when I told him that). The fossil was extracted from the rock and then polished using different methods. Downstairs, an exhibition displayed phacops dating back to the Devonian period (408-436 million years old), ammonites, minerals, dinosaur’s bones, corals, and trilobites. 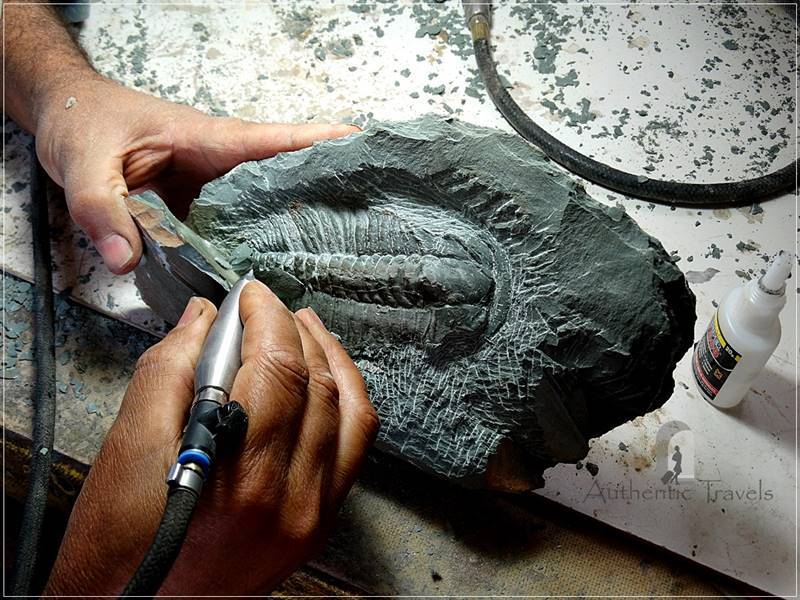 Rissani: Musee Tahiri de Fossiles – how a trilobite is revealed from the mountain rock.

Tafilalt stood once as the terminus point of the caravan route along the Salt Road. After passing the ruins of Sijilmassa, a chain of fortified villages (ksar/ksour) started. The villages usually stood near an oasis where the locals worked in the fields or picked up dates. The crumbling mud-brick ksars looked rather primitive. They had earth on the streets and as the houses’ pavement, garbage and debris, but also metallic gates and mosques with painted minarets. 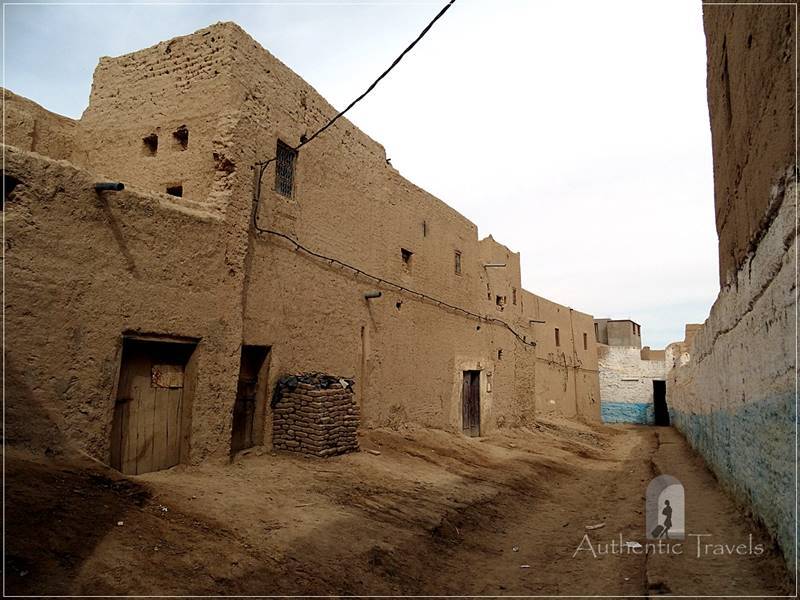 The dwellings of a ksar stood one on top of the other one. This way, a street passed through the dark gangways from the ground floor of the houses. The public fountain stood in the middle of this underground street, where children played joyfully. On the street, a man carried his two children in the mule’s holsters. The locals picked up dates from the nearby oasis and brought them home for lunch. 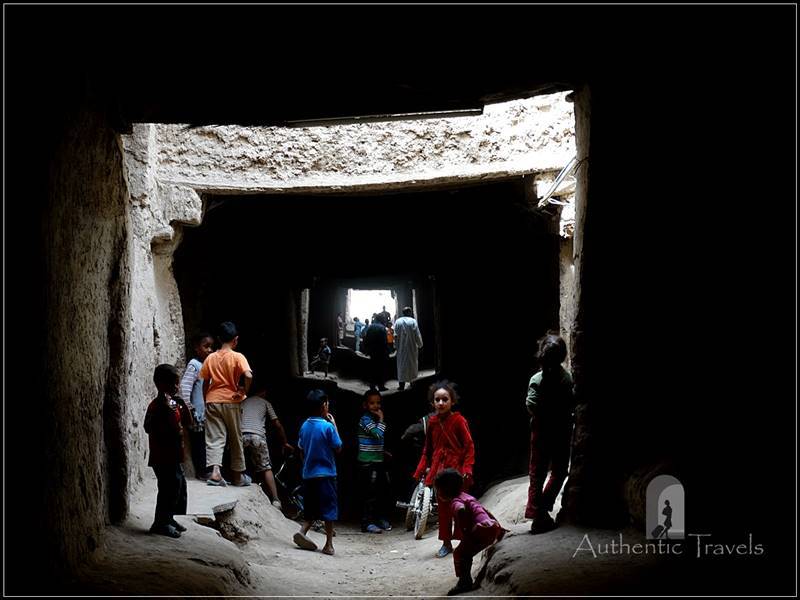 In Ksar Tinheras, two little girls followed me, waved to me, and eventually ran to me, hugged me, and kissed my cheeks. On the flip side, in Ksar Ouled El Ouali, kids coming out from school gathered around me and started to insist on giving them something: hip pack, pen, pendant, money, candies. I couldn’t even move forward because of them. A man banished them but they insisted to come back and became aggressive. I had to give up the exploration of the village and withdrew in the apparent safety of my car. 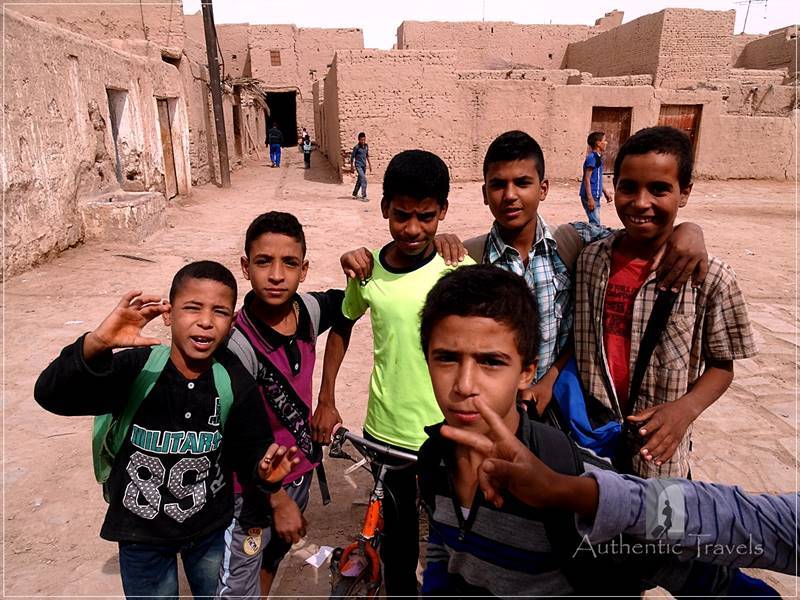 Later, in front of the Mulay Ali Ash Sharif Mausoleum, a kid asked me to take a photo of him. Then he got angry because I didn’t give him money for that. A man translated me the cause of his annoyance. I showed the kid how I erased one photo of him. He seemed pleased. However, I had another back-up photo, which I didn’t delete from my memory card. After that, the road closed the loop among the ksars near Rissani – a small town with brick houses in brown colors and dusty streets with sand from the desert. 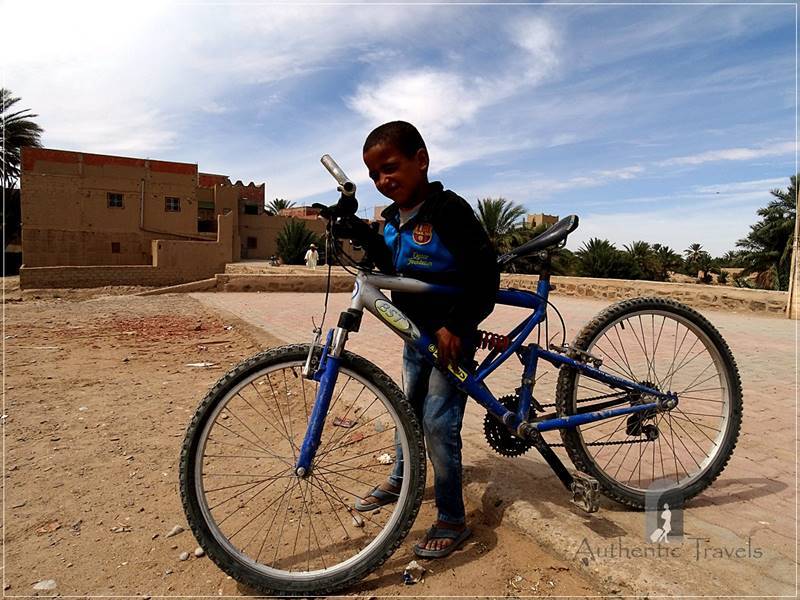 Route du Majhoul in Tafilalt Oases: Zawiya Mulay Ali Ash Sharif Mausoleum – this little boy asked me to take a photo of him and then asked for money

In the afternoon, I relaxed at the swimming pool of Camping Tiffina, which had cool water though. The owner of the camp didn’t understand why I preferred to stay there instead of taking a tour to the nearby desert of Merzouga. In the evening, I enjoyed a traditional dinner at the campsite restaurant (tajine, crusty bread, and a delicious green salad).

If you want to read more about the roadtrip through Morocco, here are all the Travel Diaries from Morocco (x 21).

Have you been to Morocco or plan to go there? Leave a comment below this post and tell me what you liked about Morocco or what you’re interested to see there.

23 Responses to “From Midelt to the Tafilalt Oasis, passing the Ziz Valley – Morocco”