Camping Azilane, where I stayed in Chefchaouen, sat somewhere on a hill overlooking the old town. From there, I had to cross a pine forest and a Muslim cemetery to reach the medina. I had just exited the camping ground when a Moroccan followed me. “Hello, we have a farm nearby.” “That’s great, and …?” “If you want to smoke hashish …?” “No, thank you!” “You don’t want to try?” “Is it legal?” “No!” Then, he suddenly disappeared, and I continued my walk.

Northern Morocco – especially the Rif Mountains, was known as the largest area in the world (42% of the global production) cultivated with cannabis. Despite the government’s desperate efforts to develop rural tourism as an alternative for the economy, cultivating cannabis was the main activity in the region, doubled by hashish and marijuana. 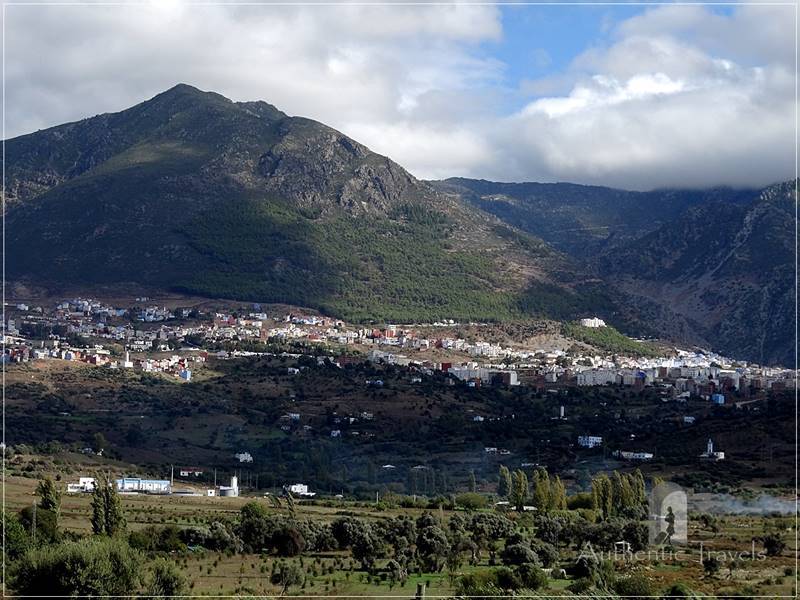 Chefchaouen at the foot of the Rif Mountains

Short Description: I went to the medina in Chefchaouen, then hiked up to the Spanish Mosque overlooking the old town. When I returned to the medina, everybody invited me to smoke hashish, but I turned down all of them.

I walked through the pine forest and descended through the Muslim cemetery to the medina. In the cemetery, I heard someone moaning, so I stopped and listened for a while. A woman wrapped in a wimple was sobbing at a grave. A bit sinister … I didn’t know what to do … Eventually, I hurried up to reach the medina faster.

The sky was cloudy with big grey clouds, but from time to time a few sunshine rays warmed you a bit. It seemed to me cold in Morocco. Since I arrived in the north of the country, a cold breeze froze everything around like in winter. In both morning and evening, my pendant thermometer measured 10 Celsius degrees. I would not have expected such low temperatures in Africa.

Located at the foot of the Rif Mountains, Chefchaouen (meaning ‘Look at the Peaks’) was called the Blue City of Morocco. Once you arrived at Bab Souq Square (the gate to the bazaar), a combination of Moroccan and Andalusian architecture greeted you. Light-blue-washed houses with raw-blue foundations, doors, and windows could be seen everywhere. 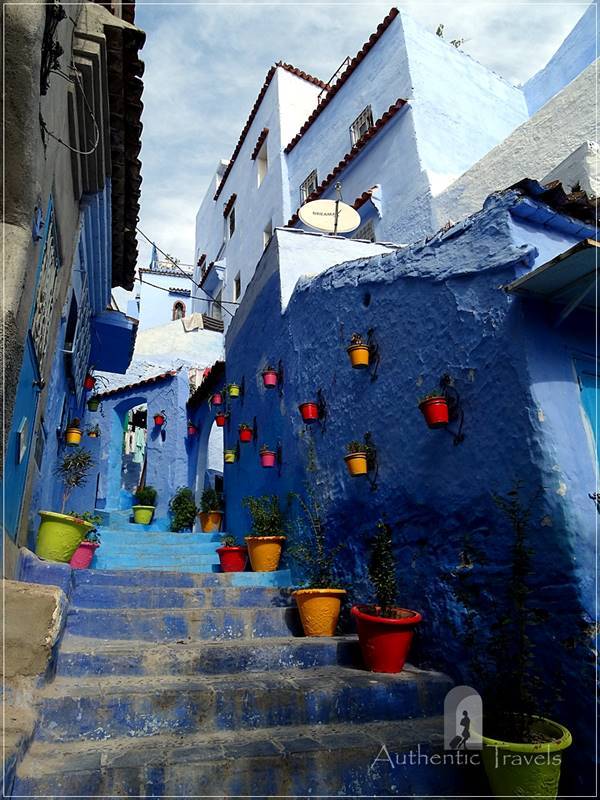 Doors, shutters, and windows had been previously painted in green according to the Muslim tradition. Also, Christians couldn’t enter the city in the past. However, the Spanish protectorate introduced the color blue in the city after 1930. Ever since houses in the medina had been painted in different shades of blue, and some streets even had blue pavement. You could see blue everywhere around.

A kid wearing a tracksuit punched his donkey loaded with gas tanks. Women dressed in gallabia and wrapped in a hijab on their heads invariably hurried to their duties. Everything around was blue. You could feel the Mediterranean influence, too. And the sky, even though cloudy, looked bluer. 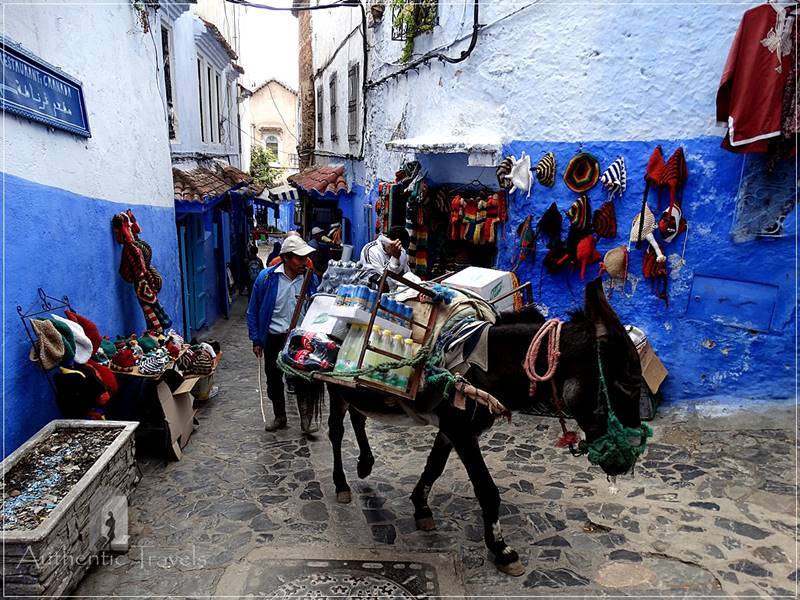 Chefchaouen: the ‘Berber car’ carrying everything in the medina

Small shops, crammed into a tiny ground floor, displayed their merchandise on the narrow, sloping streets. Red flowers, ivy, or colorful pots occasionally adorned the blue walls of the houses. Donkeys loaded with goods passed by from time to time. Shops with colorful souvenirs assaulted the streets with their goods – shawls, Berber rugs, colorful gallabias with embroideries, and hundreds of straw hats.

Near the kasbah, I reached the central square Uta el-Hammam, where Moroccans met for tea and to socialize. Here and there, public fountains (of blue color, of course) seemed like gushing out of the houses’ walls. Chefchaouen had a vibe somewhere between urban and rural, also being felt in its touristy dimension. 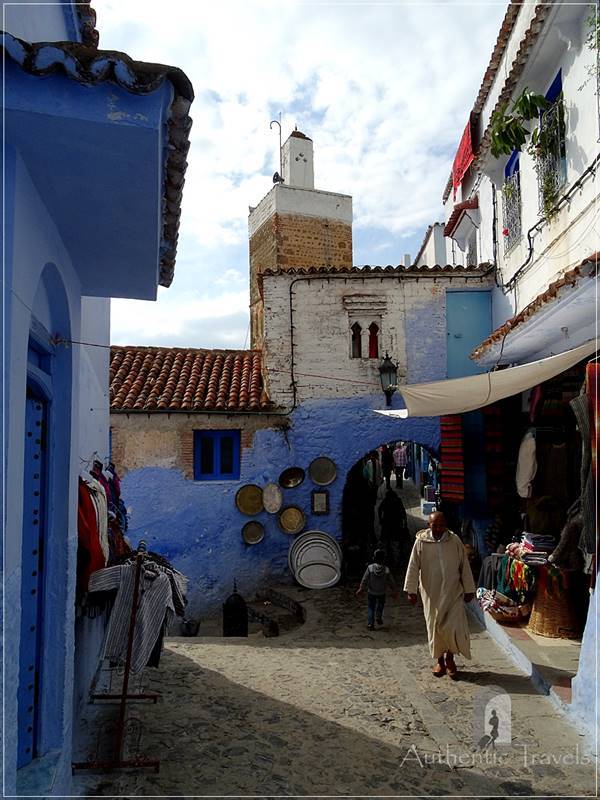 I exited the medina through Bab el-Ansar gate and passed a group of women who had come to the river to wash their clothes under the Ras el-Maa waterfall. Then, I crossed a bridge and a newer cemetery and hiked up a footpath to the Spanish Mosque for about 15 minutes. The mosque stood on a hill below the Rif Mountains, overlooking the old town. Spaniards built the mosque, but they never used it. Young boys in Chefchaouen came and had fun on the esplanade preceding the mosque. There were no other tourists. Only Moroccans. And I was the only woman.

When I returned to the medina, I had lunch at a terrace in the central square. I ordered a schnitzel with French fries, mixed salad, and, of course, Moroccan coarse bread. Then, I strolled randomly on the streets in the medina. On the way back to the camping ground, Abraham from Vida Colorada approached me. He showed me everything he had for sale in his store. Thus, I found out that a silk-and-wool bedspread cost 200 dirhams, whereas I had paid 10 euros more for a bigger bedspread in Tetouan. Abraham gifted me a blue bracelet, then innocently suggested we could smoke hashish together. At that moment, I rushed back to the camping site. I had no desire for illegal complications in Morocco. 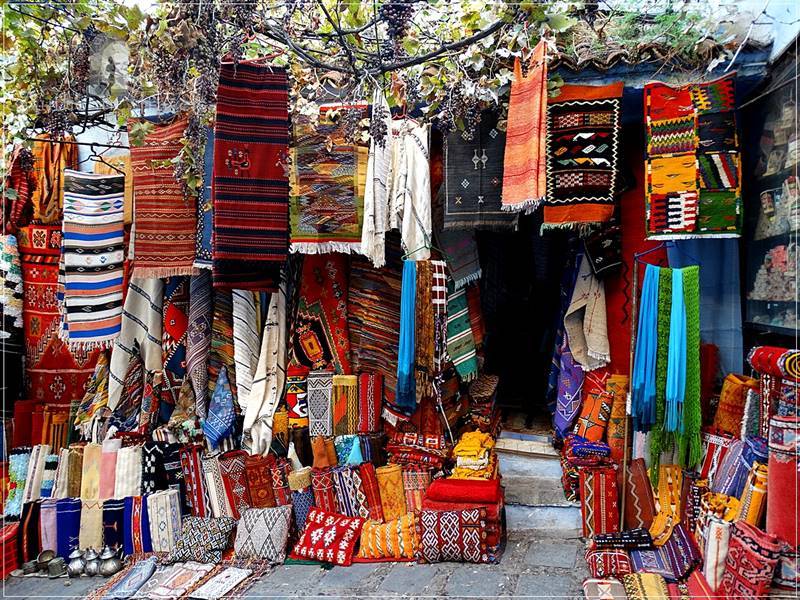 I stopped at another shop looking for Berber earrings, but I couldn’t find anything I liked. The owner started to ask me. “Postcards?” “No!” “Magnets?” “No!” “Hashish?” “No!” “A smoke of something?” “Nooo!“, I desperately answered and ran away.

Short Description: I spent the whole day at Camping Azilane on the outskirts of Chefchaouen. There, I befriended the camping staff and two Dutch travelers with their dog.

The staff at Camping Azilane was nice and helpful. The restaurant boy made me very happy. Every morning I asked him to boil me water for tea because my kettle had burned. He was always kind. I would have booked a room in the medina to not stay at the camping site because the forecast had predicted a rainy day. But the boy working at the restaurant was so nice to me that I extended my stay at the campsite and moved into a bungalow.

On the last day in Chefchaouen, I sat on the campsite’s terrace all day long. I made a selection of photos, wrote in my diary, and upgraded my number of kilograms for the hold luggage on my return home. I had left Romania with almost 20 kilograms of luggage, and I planned to go shopping for the last days of my trip in Fes.

All morning I sat wrapped in my dawn bag on the restaurant’s covered terrace and wondered how could it be so cold in Morocco? Almost 10 Celsius degrees. The boy from the restaurant was celebrating his birthday. He asked me to help him with an external card to transfer music from his USB stick and play it for his guests. When he saw the card I gave him worked like a miracle, he happily kissed my hand. He was always smiling and even gave me a discount for lunch because I didn’t have small change. 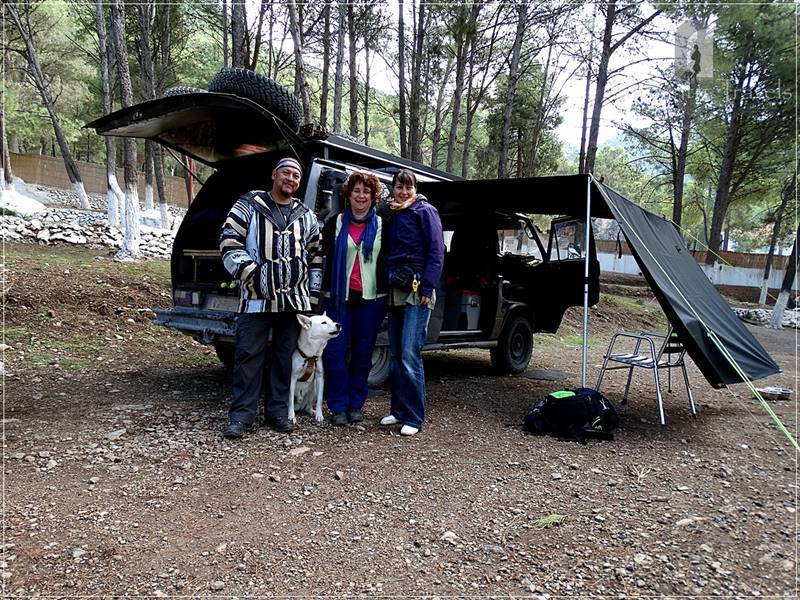 Chefchaouen: with Robert and Frederiqua (and Skai, their dog) of the Dragos Riders in Camping Azilane

At the camping ground, I met Robert and Frederiqua (with their dog Skai) – two Dutchmen traveling with a camper van through Morocco. They both spoke English very well. They told me how their camper got damaged somewhere in a remote village. A hospitable Moroccan woman in the village hosted them while they had their camper in service. They had to declare they were married so that she accepted them to stay together in the same room. They also told me how a Moroccan in Chefchaouen made a leather harness for Skai, and they had to go back with it because it had unstitched. The Moroccan repaired it on the spot and didn’t ask them to pay anything extra.

Before I left Chefchaouen, I asked the Dutch couple to boil some tea water for me because the restaurant was closed. My young friend from the restaurant was still sleeping after his birthday party. Robert and Frederiqua invited me to have breakfast with them. We had toast, ham, and Dutch cheese – something I hadn’t eaten since I arrived in Morocco.