Short Description: I left Tangier and headed to Tetouan without visiting Ceuta, the Spanish enclave. A fake guide helped me to buy a silk bedspread and visit the medina in Tetouan. After I strolled through the Spanish Quarter in Tetouan, I suddenly decided to go to Chefchaouen, where I arrived in the evening.

The road from Tangier to Ceuta followed the Mediterranean coast and winded through the hills opening to the seashore. The region was full of vegetation, green hills, and even forests. It had nothing of the dryness and aridity in southern Morocco.

Heavy, stormy grey clouds were coming from the sea, so I gave up going to Ceuta – the Spanish enclave on a small peninsula of the African continent in the Mediterranean. It would have taken me too long to leave the car at the border with Spain, then walk or take various means of transport to Ceuta’s city center. I would have become wet through. At the same time, I didn’t know where to spend the night, so I preferred to head to Tetouan with no other plans in mind. 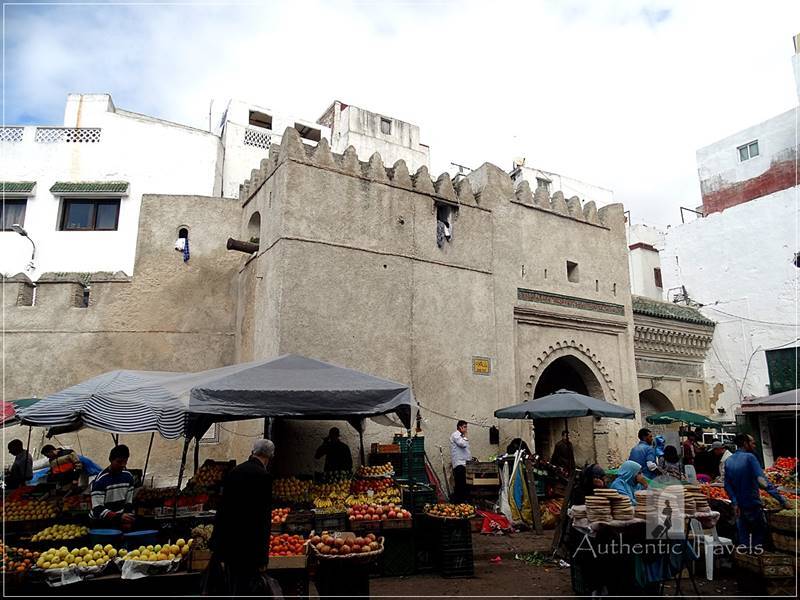 Tetouan: Bab Tut – the entrance gate to the old medina

Sitting at the foot of the Rif Mountains, Tetouan was a typical town in northern Morocco. It had a classic old medina with white houses, listed as a UNESCO World Heritage Site. It also featured a new Spanish quarter, called Ensanche – ‘extension’, with Spanish-Moorish architecture dating back to the Spanish protectorate times (1912-56). Over the centuries, the city served as a connection between Morocco and Andalusia, and Andalusian refugees rebuilt the city in the 15th century.

In Tetouan, I had to drive around the old town for a while until I found a side street with parking lots. From there, you could enter the medina through Bab Tout. All of a sudden, stalls full of fruits, vegetables, and bakery products packed the street. Hundreds of other merchandise stores in Souq Fuqui were assaulted by interested people. Behind a stall, you could see the blood of the recently slaughtered chickens whose necks hanged dead over the stalls. Hundreds of vegetables got mixed into a lively mosaic and colorful spices overflowed out of huge sacks. 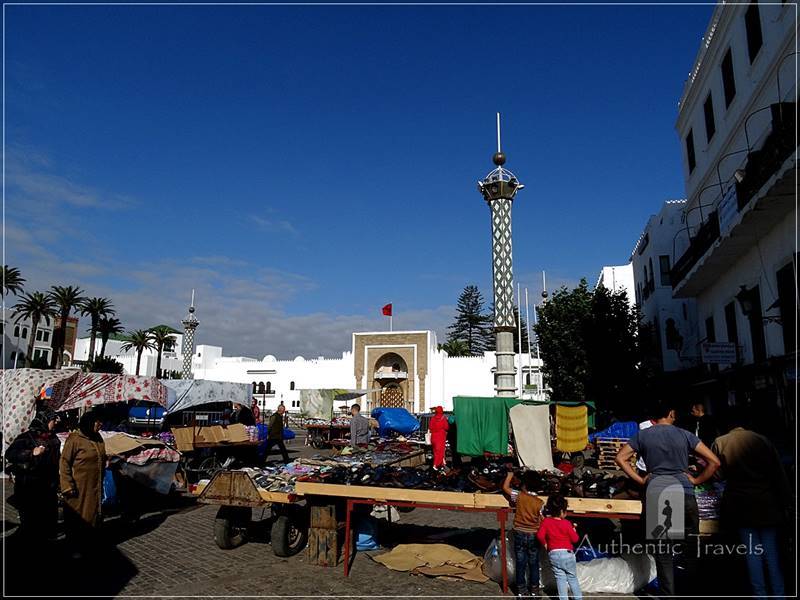 I felt tired after the last two sleepless nights. I was so sleepy that I barely navigated through the tangled medina using the small Lonely Planet map. In Morocco, however, you could be saved right away. While I was photographing some old arches, a so-called crafts-school teacher approached me and, all of a sudden, he had to go where I wanted to go. Ahmed seemed kind and nice. As I was tired and couldn’t think anymore for myself, I agreed to go with him to the crafts school.

I tried to keep up with my new friend who walked ahead of me pretty quickly and, from time to time, he checked to see if he didn’t lose me. We dived into the veritable labyrinth of the medina, where I wouldn’t have succeeded even with the best map in the world. The GPS didn’t have enough signal anyway on the narrow alleys in the medina. Sometimes, I felt lucky that the Universe sent me a savior.

Formerly known as Titawin, the medina in Tetouan was one of the largest in Morocco after Fes. The chaos of streets and alleys was at its peak. We passed mosques and markets full of shops with merchandise. Then, we sneaked under some arches and dead ends, which made me wonder whether someone would attack me there. All of a sudden, we entered an Andalusian house, and Ahmed told me we arrived at the crafts school. 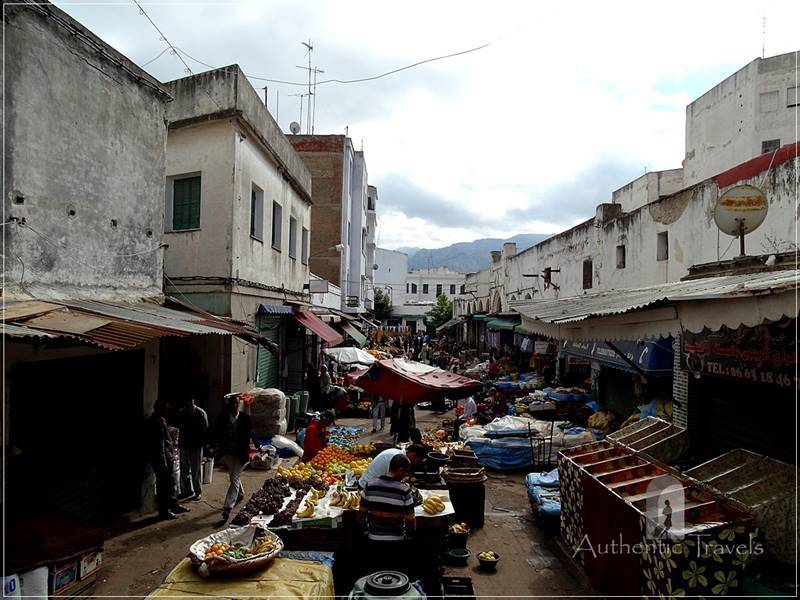 I asked Ahmed to guide me through the crafts school. We went to the first floor, where it was supposed to be a school (apparently closed only on that day …really?). The Andalusian house was 200 years old, and it had authentic architecture – an inner courtyard on the ground floor paved with genuine, colorful mosaics and decorative stuccoes. From the rooftop, you could see the kasbah on the other edge of the medina. The medina was indeed large and difficult to navigate, so Ahmed took advantage and offered to take me to the kasbah. I was too tired to go there though.

A Moroccan from the Afailal clan ran a herbal pharmacy on the ground floor of the Andalusian house. He was happy to have a client and, for 15 minutes, he explained to me the whole story of his products. Menthol for asthma, cardamom, jasmine oil, and orange oil. Musk and amber perfumes, massage oils, very cheap saffron, rose products, spices, and ginseng infusions. He had a lot of patience as he gave me to smell all the ointments and oils while he was listing all their benefits. “You don’t want to buy anything?” “No!” At that moment, I figured out where and why Ahmed had taken me there. Another fake guide! It finally hit me!

On the upper floors of the house, there was a shop with everything: kaftans, leather slippers, inlaid wooden boxes, enormous Berber carpets. I managed to explain to them not to show me carpets, but when they showed me the silk and wool bedspreads, they caught my attention right away. The seller and the fake guide immediately noticed that. The seller said exorbitant prices, while Ahmed was whispering to me the correct price. The price seemed small for such a big cover bed, so Ahmed must have cared about me … 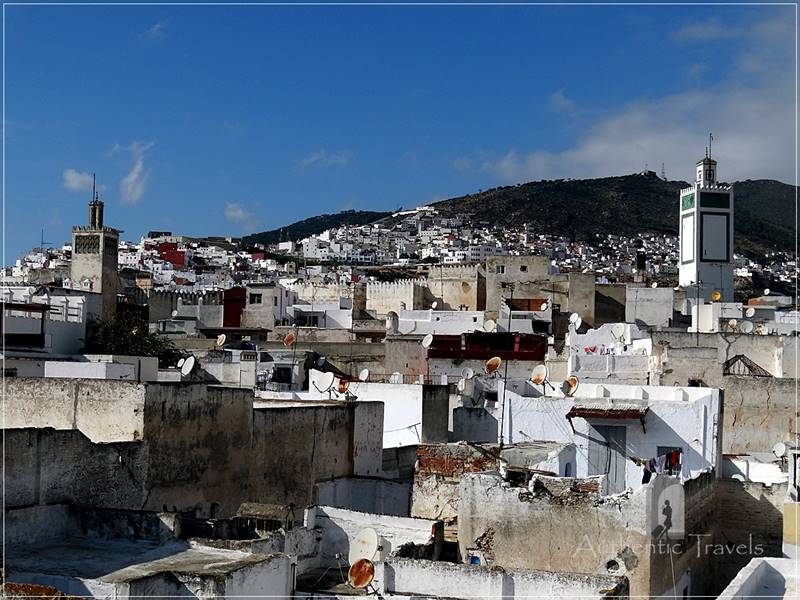 The negotiation process for the silk bedspread began. I repeatedly said ridiculous low prices. The seller sat down and held his head in his hands, meaning whether he could do something so awful and drop the price that much. Eventually, he sold me a big, blue bedspread – very beautiful, for 30 euros. Later in Fes, I would negotiate much more for such a price, so the deal in Tetouan was good.

After we left the so-called crafts school, I made the mistake and told Ahmed I was tired and hungry. He accompanied me to a riad where the menu of the day cost a lot – 110 dirhams! I told them I wouldn’t pay more than 50 dirhams for it. They realized I knew the local prices, but the owner of the riad didn’t accept to cook only for me for less money, especially as I was their only customer. 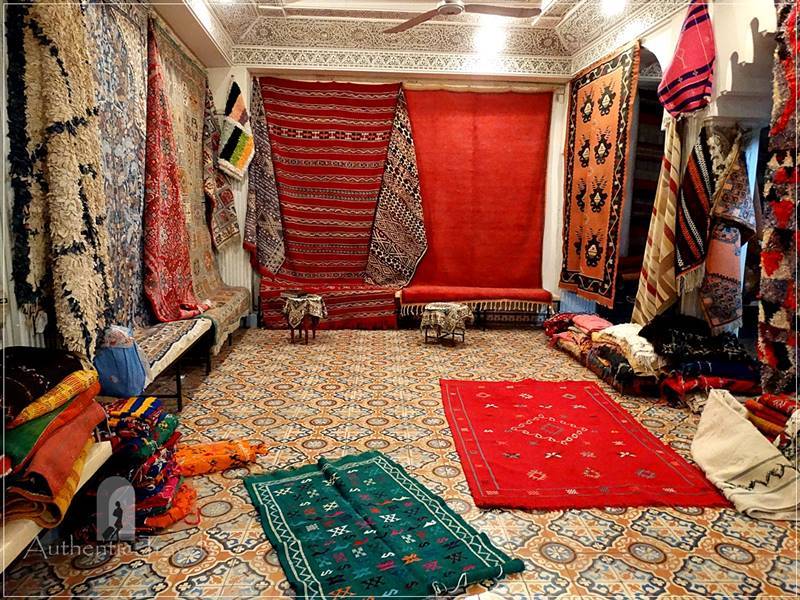 Ahmed took me to a typical Moroccan eatery, where they served chicken couscous with raisins (40 dirhams – a much more reasonable price). Ahmed made sure I was fine, and before he left, I gave him 20 dirhams. “Give me more! Give me more!“, he insisted. I told him he would get a commission from the crafts school where I had bought a bedspread. “No, no, they don’t give commission. It wasn’t about that!“, he complained. “I know better“, I told him and waved him away without giving him anything else.

After lunch, I left the medina. I was fed up with fake guides and Moroccans taking advantage of me. I was tired of being a tourist. However, these guides were indispensable in the medina. You got lost in the chaotic alleys anyway, and they knew that.

On the way back to my car, I strolled through the Spanish Quarter (Ensanche) – a neighborhood with wide boulevards flanked by white buildings of Spanish colonial architecture with Art Deco ornaments. Navigation was easy in the Ensanche: all streets led to Moulay Square – a circular square with a huge roundabout, around which the perimetral buildings, including a church, curved round. 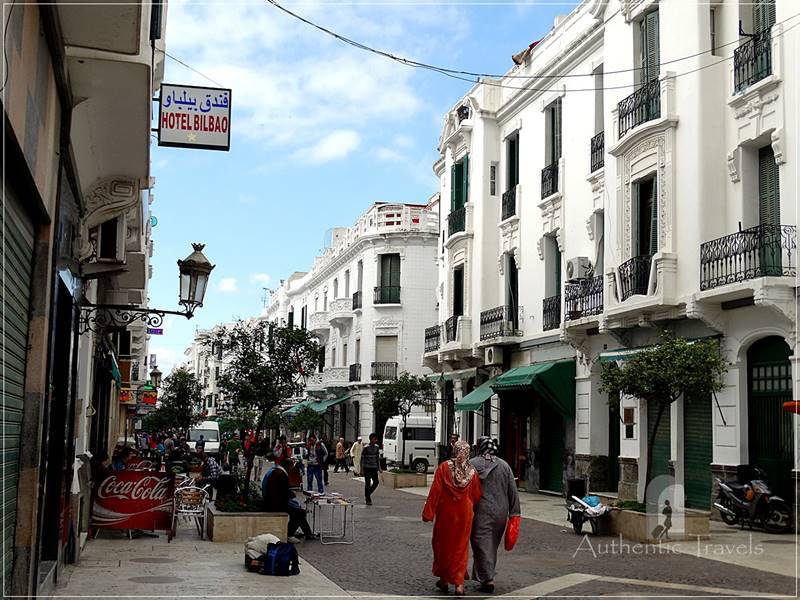 The Spanish Quarter was different from the old medina. It had cleaner streets and classic buildings, covered with bright-white plaster, wrought-iron balconies, and dark-green shutters. Colonial buildings endlessly lined up along the streets and created a European atmosphere, well-ordered, neatly organized, even more stylish and fashionable.

I didn’t want to end up in a filthy hotel room in Tetouan at random. Annoyed that fake guides had tricked me again, I suddenly decided to go to Chefchaouen, which had a camping ground. I didn’t need a reservation at the campsite, and I could sleep in my tent. 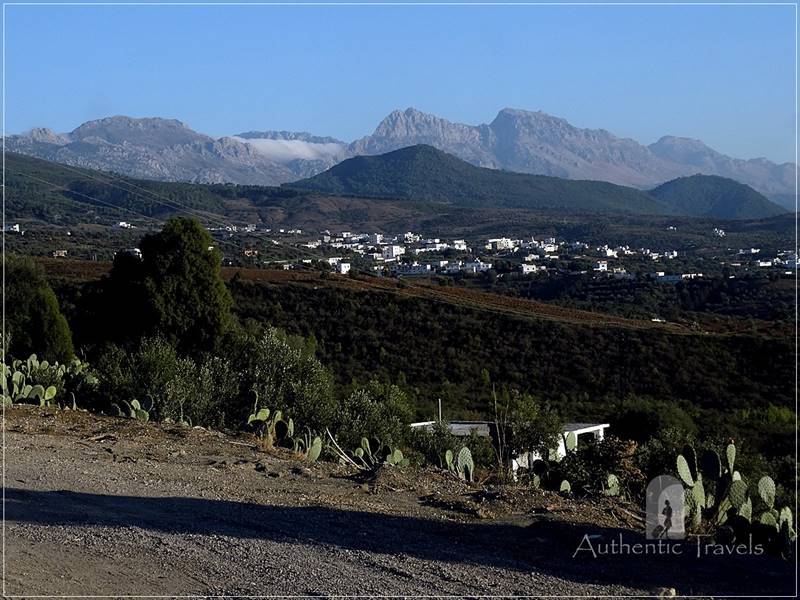 On the road from Tetouan to Chefchaouen: view over the Rif mountains

The road to Chefchaouen crossed a part of the Rif Mountains, passed a small dam, then snaked toward the Blue City of Morocco – Chefchaouen. I had a hard time finding the camping ground in Chefchaoeun, as there were no road signs to ease navigation. I asked locals, and they indicated me to go somewhere uphill. Only German or French caravans, who came over the Strait of Gibraltar, stayed in Camping Azilane. The camping site didn’t have a special place for tents, so I had to set up my tent in a place with soft earth, where I could easily use the pegs. I had the only tent in the whole camping site.