Short Description. I strolled through the medina and went to Dar Nour to take pictures for a blog article. In the afternoon, I went to Ville Nouvelle, and in the evening, I moved to Dar Bargach in the heart of the medina.

In the morning, I left the accommodation I had on the outskirts of Tangier as quickly as I could. The hosts weren’t even at home when I left, so I left the door open as they didn’t leave any other indications. Eventually, I headed to the old medina.

I parked near the entrance to the medina and gave some money to the man guarding the parking lot. As usual, I gave him as much as I wanted. The intention mattered. Then, I entered the medina through the main gate Bab el-Fahs – the gate in Grand Socco Square, a typical Arabic medina gate, of immaculate white, but with a pointed arch of Gothic influence. 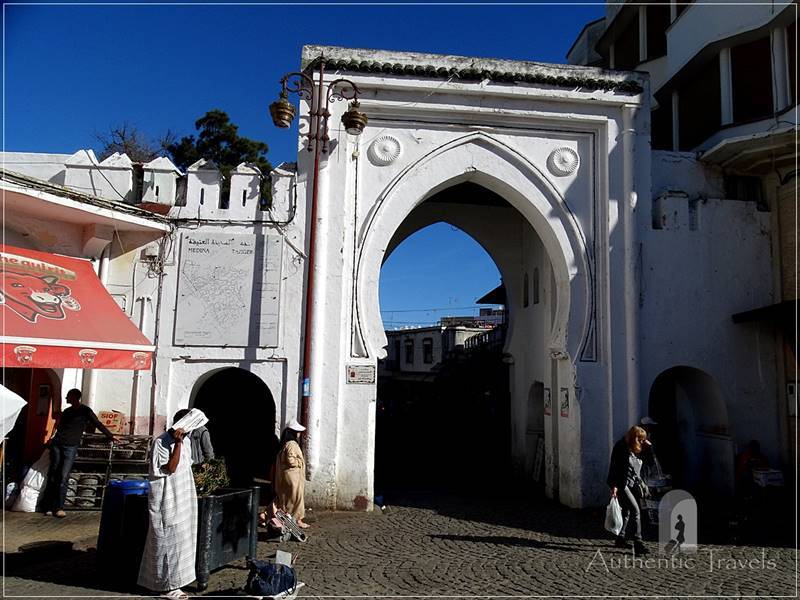 As it was facing the Strait of Gibraltar, Tangier always had strategic importance in the Mediterranean area. At the same time, it was the gateway to Africa. While Morocco had been repeatedly divided between France and Spain through history, Tangier remained a kind of international zone until the country gained independence. After that, it went into an atrocious decline and was dominated by criminals and drug addicts until 1999. Then, a new development project revitalized the port area, and tourism exploded as criminality had disappeared.

The medina in Tangier was surrounded by 15th-century Portuguese fortifications and, therefore, it felt slightly different from other Moroccan medinas. Arab culture dominated, but the medina also had European influence. White houses, tangled pedestrian streets, winding and narrow alleys. Somehow, the bustle of the Arab medinas was missing. It was a more settled, quieter, neater bustle.

Tangier: the main square or Petit Socco (or Souq Dakel) in the old medina

The medina in Tangier didn’t have a main street. The only main alley was the one that linked Grand Socco square (outside of the medina) to Petite Socco (inside of the medina). Petite Socco, or Souq Dakel, was a kind of square formed organically at the crossroads between several streets inside the medina. It once was a place for sale, drugs, and prostitutes. On this street you could also find the Spanish church with a monastery next to it. The monastery featured an inner courtyard surrounded by porticoes – an architectural element typical of the Gothic monasteries from the European Middle Ages.

Architecture in the medina of Tangier was different than in other Arab medinas. Multi-level buildings featured balconies facing the street as opposed to the typical Arab houses opening onto an inner courtyard. Multiculturalism could be felt through the presence of religious buildings belonging to Islam and Christianity, as well as eclectic buildings of European influence. Once you reached the edge of the medina’s main street, you could see the port of Tangier and the Strait of Gibraltar. Europe was not so far, after all.

Many Europeans – French or Spaniards, moved to live in Tangier. They settled with a business in the tourism industry or opened a riad for visitors in the medina. The most picturesque neighborhood in the medina was the sultan’s fortress neighborhood in Place de Mechoir. The fortress, kasbah, stood somewhere in the higher part of the medina. The sultan’s fortress (Kasbah Dar al-Makhzen) housed a large museum complex with a big inner courtyard surrounded by porticoes. However, it didn’t have the same decorative richness as other Moroccan palaces. You could feel the European influence, more settled, and less exuberant. The fortress also featured vast gardens with lush vegetation where everyone took advantage of the palm trees’ shade. 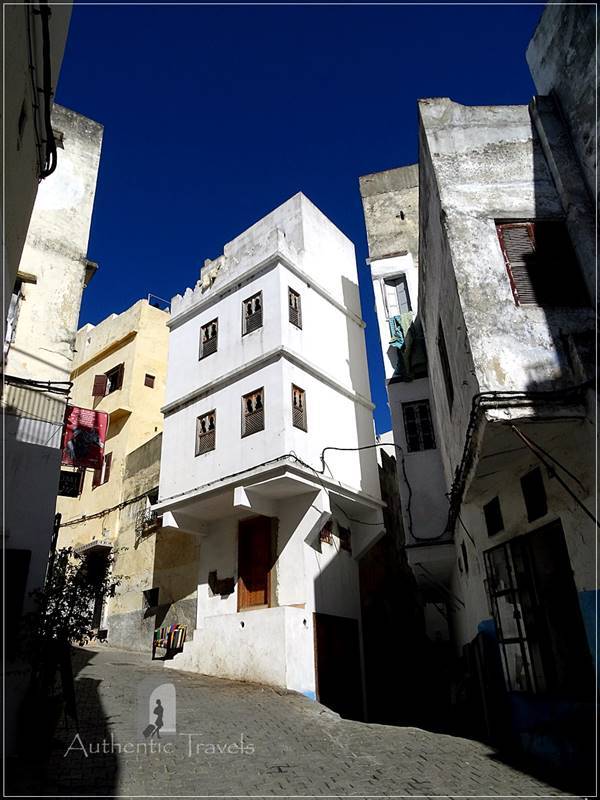 Tangier: a street in the old medina

Only the streets in the kasbah’s neighborhood (the oldest part of the medina) had a typical Arabic vibe. In the surroundings of the kasbah, I went to Dar Nour, where I had talked to Philip (the French owner of the dar) to barter with him and write an article about his dar in exchange for accommodation. Philip offered me a fresh orange juice on the terrace overlooking the whole medina, a breathtaking view. Then, he showed me all the rooms of his dar to take pictures. However, the rooms were all fully booked, and I had to look for other accommodation in the medina. 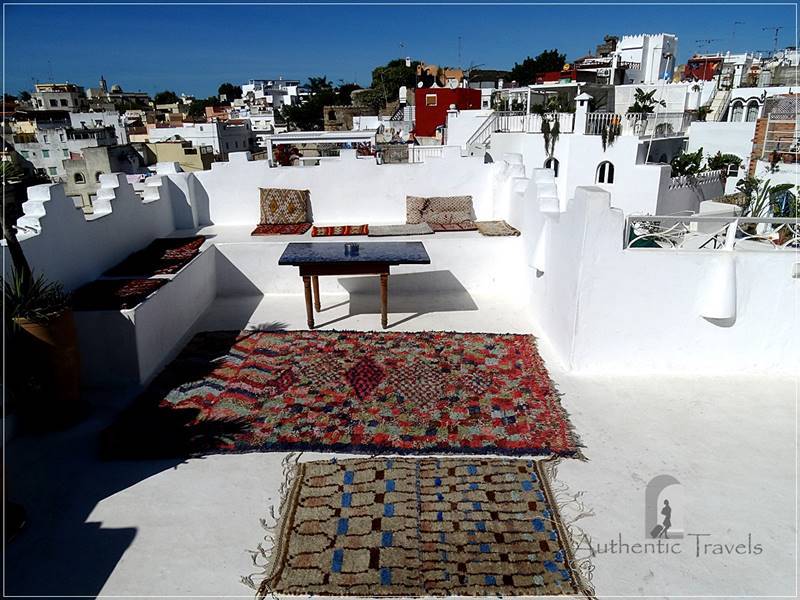 Dar Nour was truly beautiful – a typical Moroccan dwelling with numerous rooms, corridors, stairs, terraces, and pergolas, from where you admired the whole medina in Tangier. Immaculate, dazzling white everywhere – especially on the upper terraces, while all rooms were unique and decorated with discreetly colorful Moroccan furniture. And the bathrooms had my favorite finishing – my beloved tadelakt.

At noon, I had lunch in Grand Socco Square – a mix of fried fish and shrimps, french fries, olives, bread, and an orange Fanta served in an old bottle (like those found in Romania during the 90s). Grand Socco was a large, circular square with a central fountain. The square sat on the border between the old medina and the Ville Nouvelle, the New City. The New City featured modern buildings of colonial influence, but it didn’t have the same quality architecture as Casablanca or Rabat. I strolled through some of the new neighborhoods on the hills in the new city for a while. Then, I walked on some sloping streets and returned to the medina to search for accommodation. 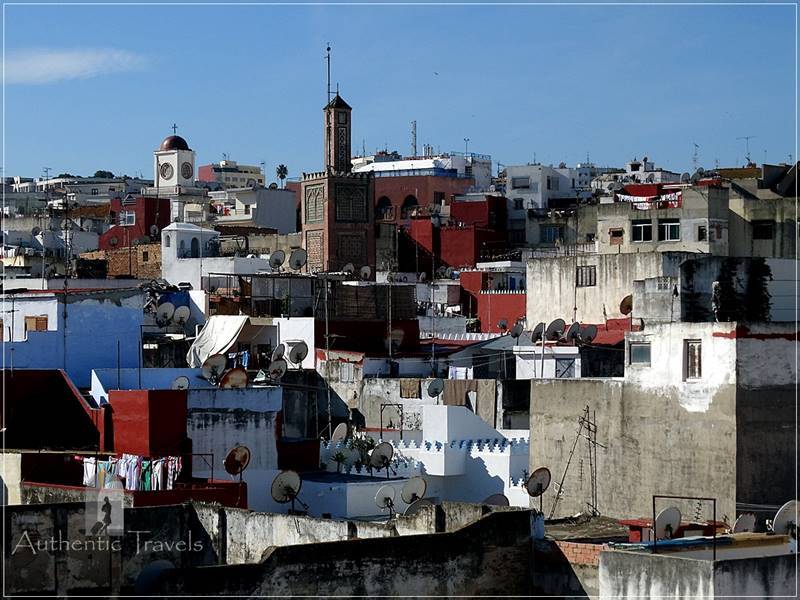 Tangier: view of the old medina from Dar Bargach

I went to look for Dar Bargach, a Moroccan dar recommended by the Lonely Planet guide within the maze of streets in the medina. Before I carried my luggage there (the medina was exclusively pedestrian), I went to see where the dar was located. I wanted to know how to navigate the winding streets so that I could come with my luggage directly there. I talked to the owner, a very nice young Moroccan woman. The accommodation was a bit more expensive, but I had a typical Moroccan room overlooking an inner courtyard in a traditional dar.

I had to get my car from where I had parked it in the morning. So I moved it to the other side of the medina, near the port. There, the parking guards immediately approached me. I had to negotiate with them because it didn’t work to give them as much as I wanted. They knew I had to leave the car there overnight, so they took advantage of that and asked for a higher price. Eventually, they made me pay 20 dirhams per night for the car. However, it didn’t even matter how much I spent on parking as long as I stayed in a traditional Moroccan dar. It was all worth it.

Dar Bargach was located right in the heart of the medina, at the edge of winding and deserted alleys. As soon as you entered the small, stylish patio of the dar, you felt overwhelmed by the perfect synthesis of Moroccan architecture – stuccoes, colorful mosaics, tadelakt on the walls, painted wood ceilings, an intimate and quiet atmosphere, secluded from the urban bustle. From the terrace of Dar Bargach, you could admire the entire medina of Tangier, including the Strait of Gibraltar and a bit of Spain.