Morocco’s cultural and spiritual center, Fes is an outstanding example of a medieval town created during the first centuries of Islamisation in the country – which is why it is part of the UNESCO world cultural heritage. Narrow lanes flanked by high brick walls meander throughout the medina (the old part of the town, called Fes-el-Bali). There’re nine thousand dwellings in the medina and no fewer than four thousand lanes and blind alleys. Casa Aya Medina guesthouse stands in the western part of the medina, at a walking distance between Talaa Kebira (the main shopping pedestrian street) and Bab Ain Azletin (one of the entrance gates to the walled old town). 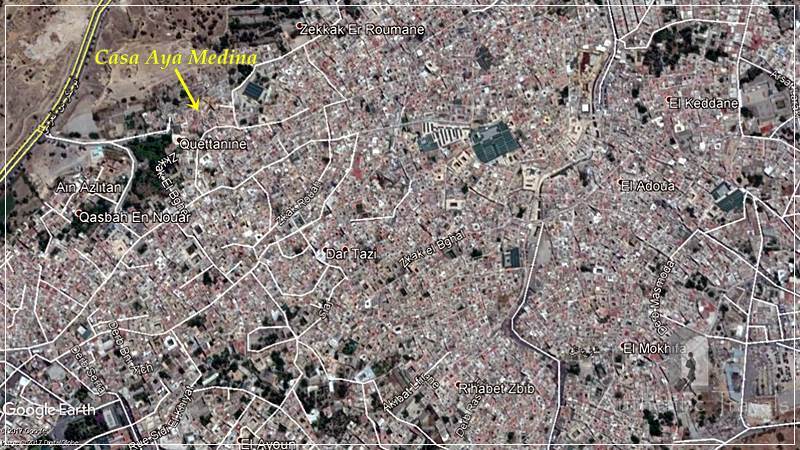 Casa Aya Medina: the location of the guesthouse within the old medina Fes el-Bali

Once you walk down Ain Azletin street, take care not to bump your head as you pass under a low archway. You then enter a narrow lane (called Derb Benadada), less than one meter in width, with a few doors and windows randomly placed. A few children might play football in this tight place, and you might get a ball smashed into your face. Don’t bother about that! Walk ahead, and you’ll find a simple door entry at the end of a zigzag blind alley, where you’ll never guess what lies behind. Never mind, the old configuration of the urban tissue will discretely reveal the neighborhood’s authentic secrets to you. 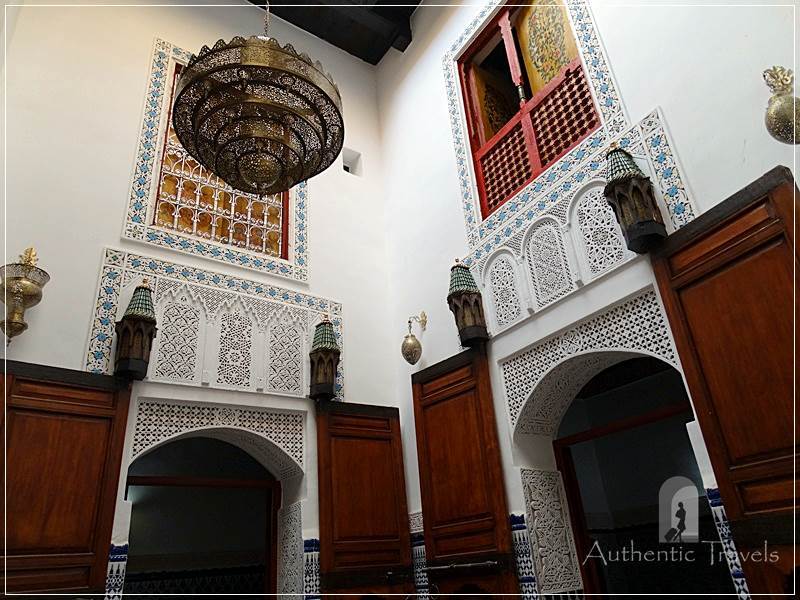 When you enter the guesthouse, you step into a long L-shaped corridor at the end of which lies an inner courtyard. You are in a traditional Moroccan house, called dar (a modest version of a riad – the traditional Moroccan house for wealthy families). An old fountain decorated with colorful mosaics (called zellij) stands on one side of the inner courtyard. It was once a larger fountain, but it suffered transformations during the restoration works, and the dar gained more space for a new dining room in the patio. On the opposite side of the fountain, a traditional family salon (called taklidi) and a luxury matrimonial room open up onto the courtyard (called bahn). Close to the main entrance, a staircase goes upstairs to the next floors where the private rooms are. 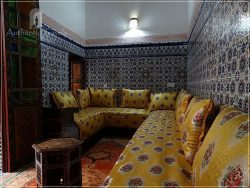 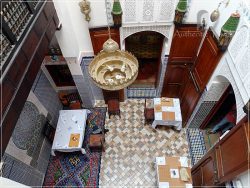 All rooms open up onto the inner courtyard as a result of the Islamic architecture principles. The main idea is to minimize the impact of heat and direct light and provide ventilation to the interior spaces. Originally open-air, the courtyard has been covered with a glass skylight and gained a new modern look. 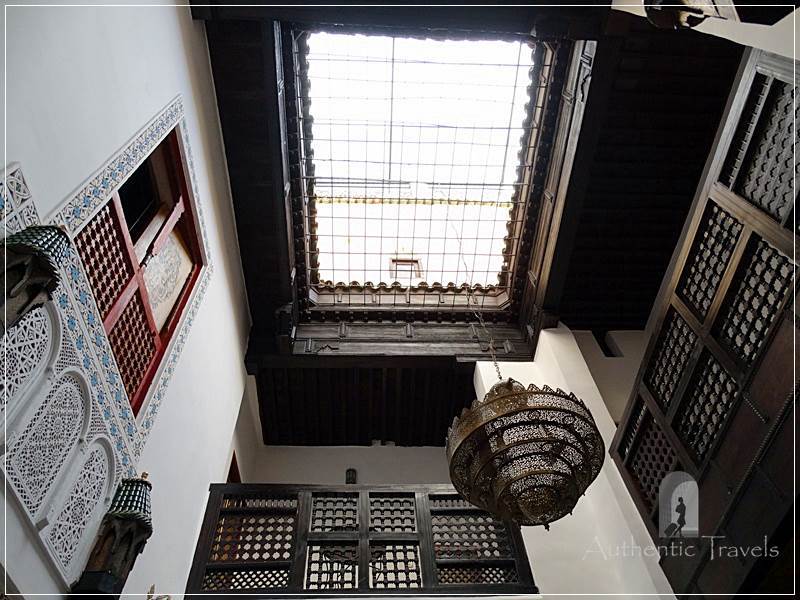 Casa Aya Medina: the skylight of the inner courtyard

In Morocco, many people work out on the street no matter what they do – from selling something to woodcarving and loom weaving. Unlike the exterior of the house – that is a working space, the interior of a traditional Moroccan house is like heaven – not only for women who might be without the constraints of clothing, but also for its rich decorations. Door and window frames feature stucco plaster decorations of hand-painted multi-colored arabesques. The door thresholds have finely and richly colored mosaics. The inner doors and shutters are of solid cedar wood from the Middle Atlas Mountains, and some of them even have painted colorful drawings.

Casa Aya Medina: the staircase in the inner courtyard 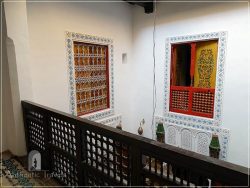 All rooms for guests are on the upper floors, two rooms per floor. The modern rooms look out to the collective patio, but also offer privacy inside. Each room has two to three beds and a private bathroom. Wooden shutters (called mucharabian) create privacy for these rooms, but once you are inside, you can still see what is happening downstairs in the collective courtyard. Most rooms feature traditional motifs, from cactus silk curtains and bedspreads to old painted cedar furniture and handmade Berber carpets. The recently restructured bathrooms have sinks with traditional mosaic (called zellij). And the ceiling of each room is cedar painted with geometric or floral designs. 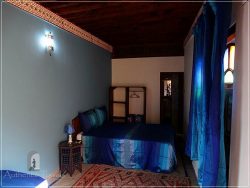 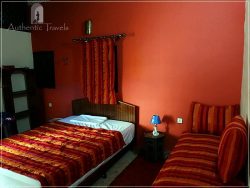 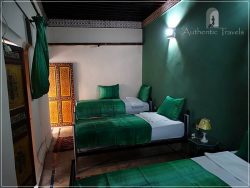 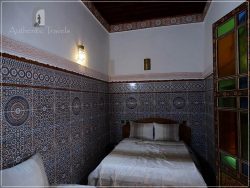 The top-floor terrace was once for drying the laundry – an occasion for women to meet up and socialize. Nowadays, it is an outdoor dining area grouped around the last level of the inner courtyard. A green pergola covers the terrace overlooking the mosque and the old furniture bazaar (called souq) in the Ain Azletin neighborhood. 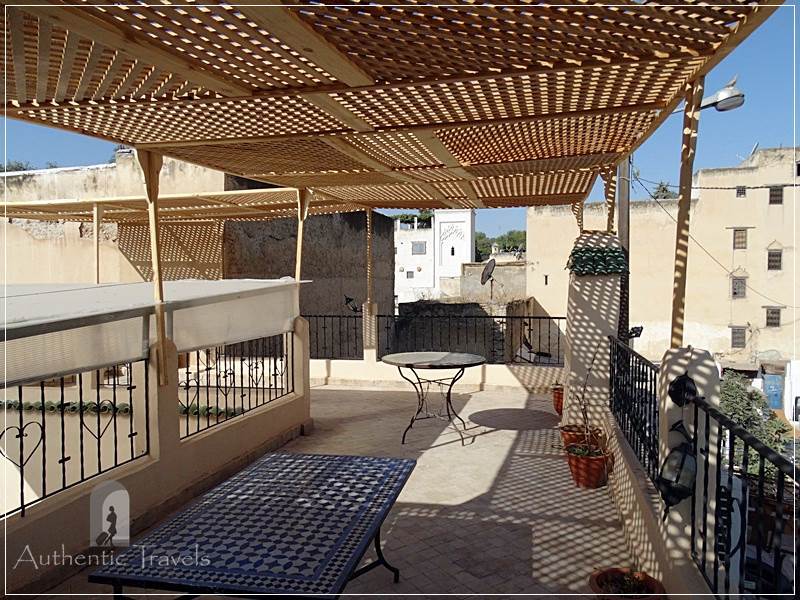 Casa Aya Medina: the upper terrace with a wooden pergola

The co-owners of Casa Aya Medina, Fouad and Milouda el-Ouazzani, had just completed the restoration works when I visited them in the autumn of 2015. After they completed several local consolidations, it didn’t feel you were in a seven-hundred-year-old house. I explored every corner of the house with great curiosity. The configuration of the house and the careful interior design transposed me into another world. Birds were chirping on the upper terrace every morning. The call-to-prayer echoed throughout the medina five times per day. And from my room, I saw the breakfast preparations and felt the smell of mint tea poured with white foam into small glasses. For three days, I lived in an authentic Moroccan palace, like a queen. 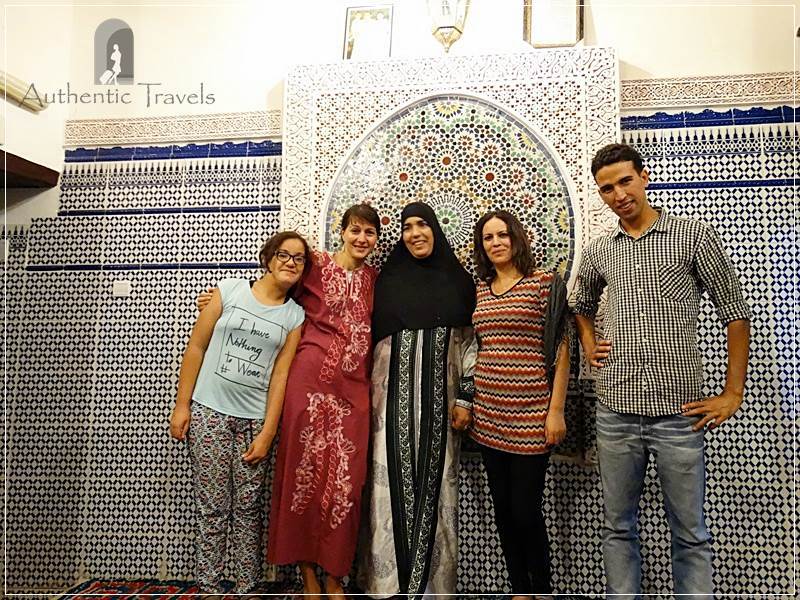 Casa Aya Medina: with Milouda, Mohammed, and other family members

Every morning, I was impatient to start my day. I pulled on my shoes with excitement and ran downstairs. In the inner courtyard, I had a quick breakfast and rushed out to the street. I was ready to explore the old medina in Fes.

Casa Aya Medina can be found on booking, tripadvisor, and their website. 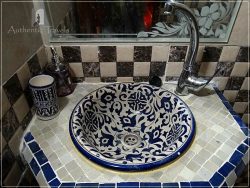 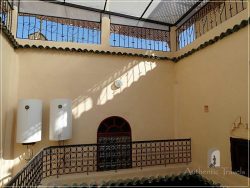 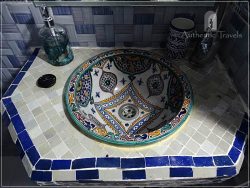 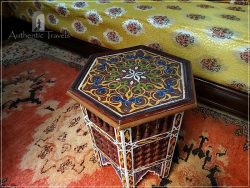 Want to subscribe to my travelogues? Just leave your email in the subscription form below and you’ll be notified when I publish a new post.