I walked only through the Christian part of the old town of Ohrid. From the Upper Gate (Gorna Porta) of the fortress, I went to the citadel of Tsar Samoil on the hilltop. From there, I descended through a pine forest to the church from Plaosnik. I wandered around tangled streets on my way to St. John’s Church from Kaneo. From there I came back to the town walking a suspended walkway over the waters of Lake Ohrid. I went to the cathedral of St. Sofia and then hiked up to the church of St. Bogorodica Perivlepta, from where I descended to the Hellenistic theater and further on to the main pedestrian street Car Samoil.

The rainy and cloudy morning forced me to stay in my room, where I wrote, read, and chatted with John – the American guest from the other room. John worked in Skopje as a bodyguard for one year after he had been doing the same thing in Nepal during the past year. After lunch, the sky lightened up and I went out to explore the Christian part of Ohrid’s old town. 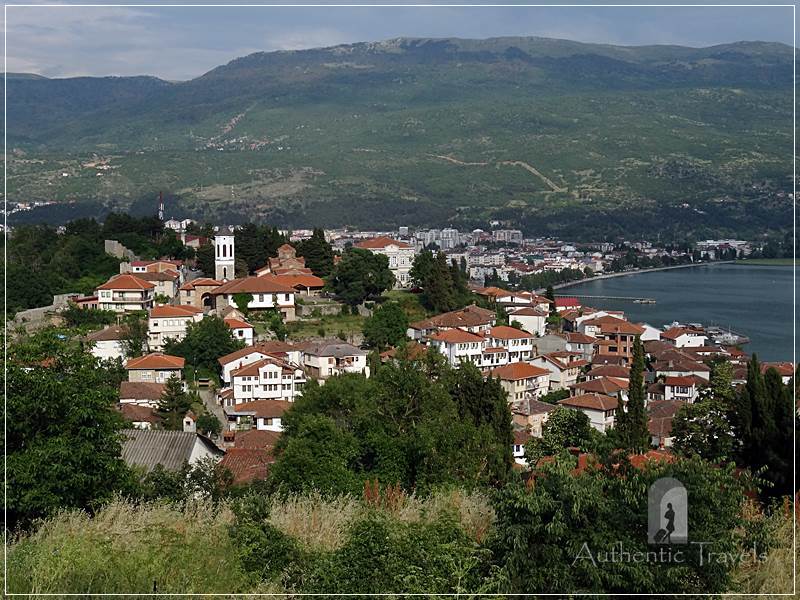 Ohrid – view of the old town from Samuel’s Fortress

Known as the town of 365 churches (one for each day of the year), the Ohrid region had been considered as the second Jerusalem. However, only 70 churches preserved from all of the 365 original ones. Listed as a UNESCO heritage site for its unique heritage values (natural and cultural), the town of Ohrid was the oldest and most complete architectural ensemble in the southeastern part of Europe. The old town formed between the VIIth and XIXth centuries on the shores of Lake Ohrid. It developed on archaeological remains that dated back from the Bronze Age to the Middle Ages. Thus, traces from different historical periods of the town (Antiquity, Byzantine, or 19th century) often appeared here and there. 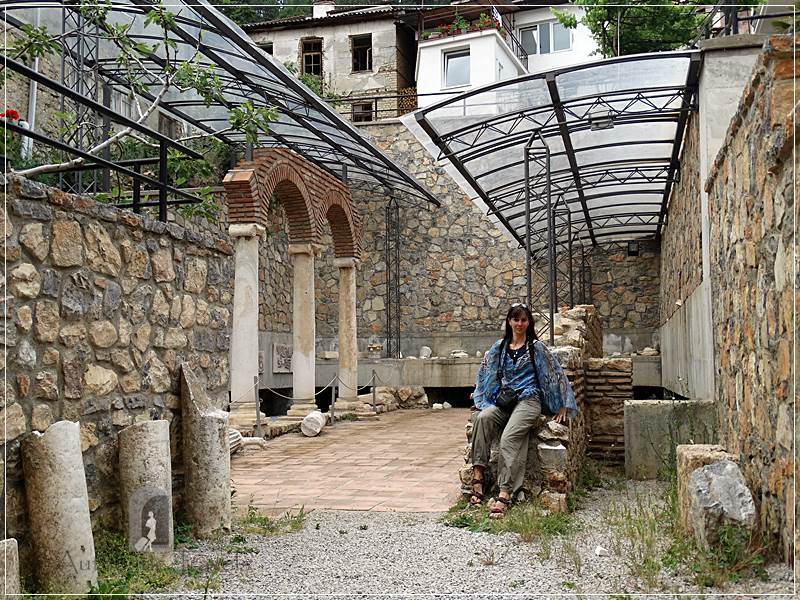 The Christian quarter arbitrarily occupied the hilly part of the town and had houses and churches overlooking toward the lake. It spread from the Upper Gate of the old town to the lakeside corniche and to the sycamore tree from the square with fountain. I went once again to Tsar Samoil’s Citadel on the hill, from where the name of the town came (vo rid in Slavonic means ‘the fortress on the hill’). After that, I descend along the streets with villas and bohemian atmosphere, as well as with tourist stalls set up chaotically. 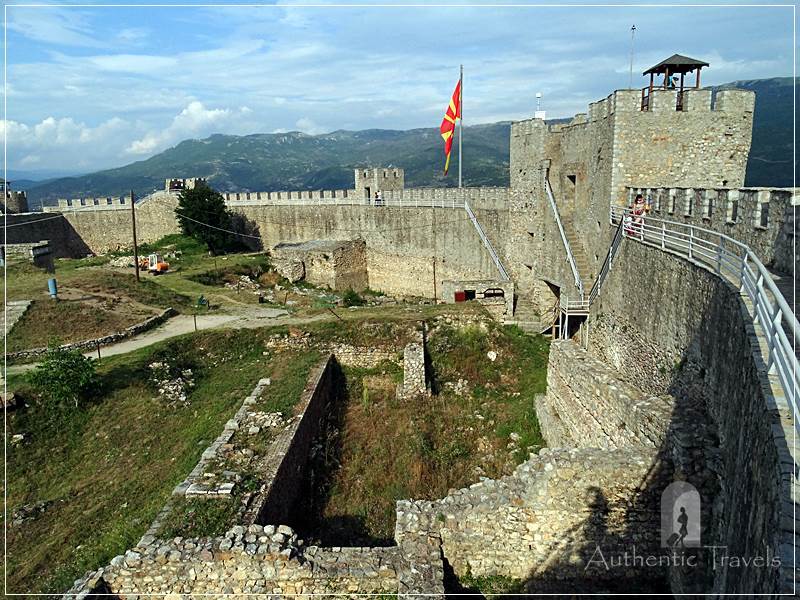 Christian basilicas dating back from the forth to the sixth centuries spread throughout the whole part of the old town. They sprawled among elegant and imposing villas, but also among shabby houses, sometimes precariously located on steep slopes. Cultural and ecclesiastical Byzantine center, Ohrid had countless churches, rich in large and colorful frescoes, mosaics, and original elements. 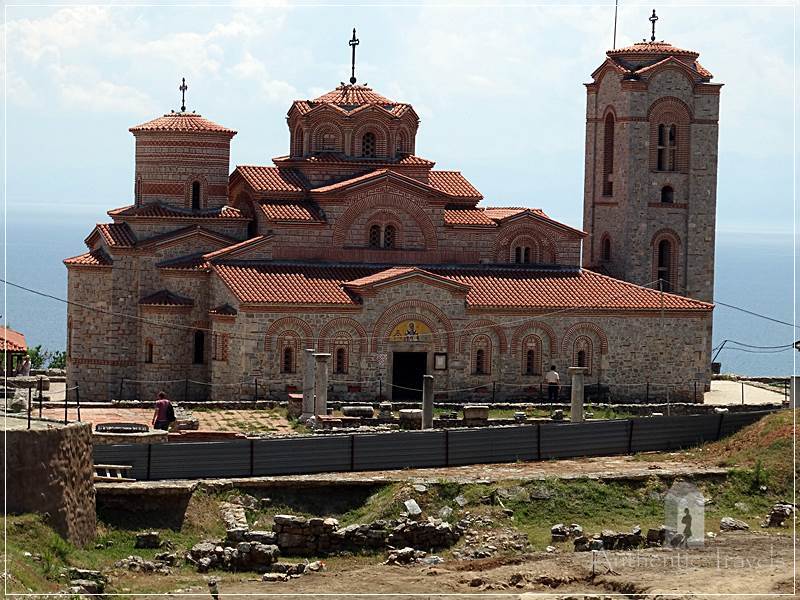 At Plaosnik, St. Clement Panteleimon church had been built on the ruins of a fifth-century basilica. Moreover, the ruins of the oldest Slavonic monastery preserved around the church. It was the first Slavonic university from the Balkans, founded by St. Clement and Naum in the nineth century as the Ohrid School, where they created the Cyrillic alphabet. From Plaosnik, I went down on streets with modest houses, that alternated with churches and chapels, to St. John’s Church in Kaneo. The famous 13th-century church suddenly unveiled itself on top of an isolated promontory, at the bottom of which azure waters thundered rocks. 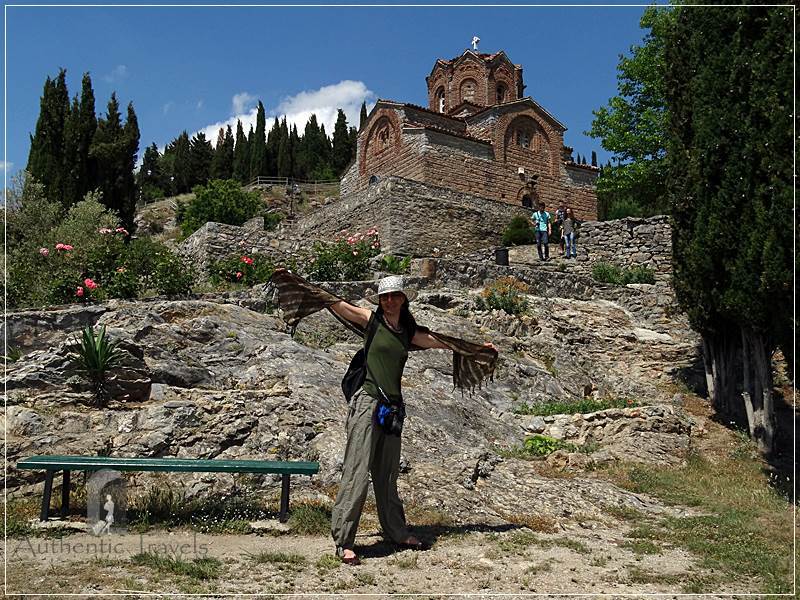 From the tiny church, I descended to the Kaneo Bay, where restaurants with floating terraces and sunbeds on the beach charmed me right away. I sat down at Kaneo Restaurant, where I ordered a fish soup (which didn’t fill me at all). Consequently, I ordered another dish with fried fish (plashica – endemic fish from the Ohrid Lake). With the water gurgling around me, I drank a coffee while I was watching boats going here and there. Afterward, I left Kaneo and walked along the shore until I reached a wooden bridge that went parallel with the cliffs and soon arrived in another part of the old town. 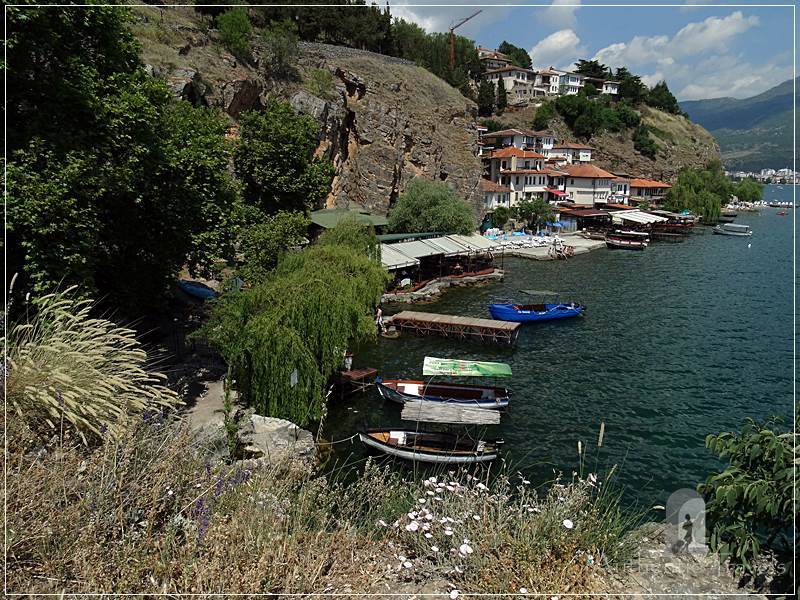 I continued my walk along streets with both boats and cars parked all together. Then I reached the Cathedral of St. Sophia, which dated back to the 11th century. The cathedral had been a mosque during the Ottoman empire. As a church, it hosted unique frescoes with characters from both the Catholic and the Orthodox church. In the courtyard of the church, Mustafa eyed me, but I turned down his offer for a guided tour. Eventually, I had to promise him we’d have coffee the following day. Although he was Muslim, he guided tourists to the Christian churches of the town. Besides, he told me that he took from each religion what he considered best for him. 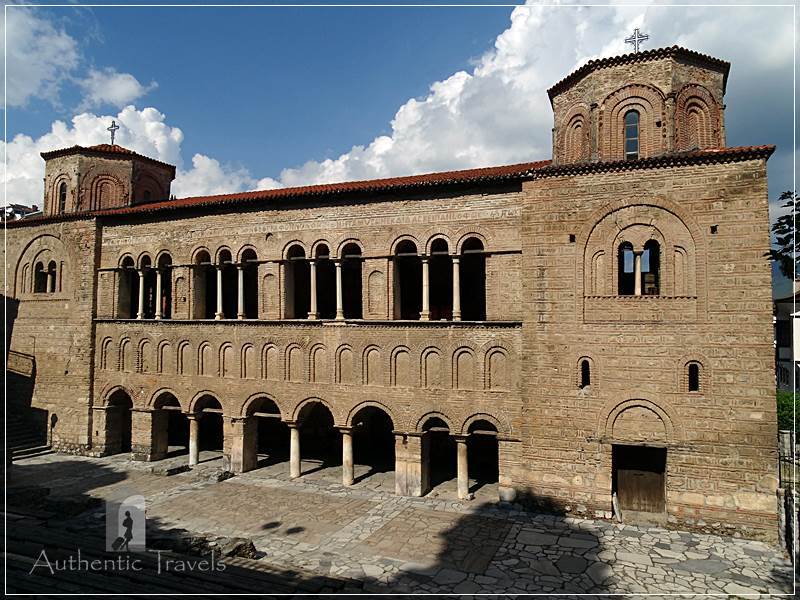 Ohrid – the cathedral of Sveti Sofia

From the cathedral, I went up to the church of St. Bogorodica Perivlepta along narrow streets. There, the guard explained me the original 13th-century frescoes, which had a lot of blue. The guard added that one of the rich families of the town brought this color from Afghanistan. Nearby, the Hellenistic theater (later transformed into a Roman one) had been dug into the natural slope of the hill. Houses with balconies overlooking the scene naturally surrounded the theater. In addition, where I expected less, ruins of the Hellenistic town, Lychnidos (in Greek – the city of light), appeared at any corner of a street. 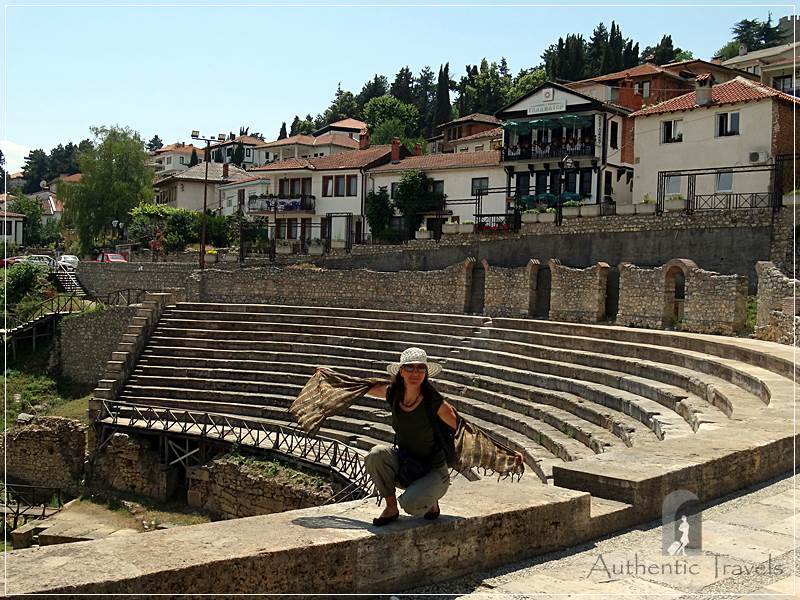 In the afternoon, I descended along winding streets among elegant villas as well as tiny chapels and reached the lakeside corniche, full of cafés and restaurants. The corniche ran parallel with the pedestrian street Car Samoil, flanked by massive and tall, imposing palaces, with wood at the edges of the white façades. The buildings along Car Samoil were hotels, restaurants or shops at the ground floor of the buildings. Most of the shops sold jewelry with the famous Ohrid pearls. A soldier from Russia brought the secret of the original pearl in 1924. Only two families of the town (the Talevi and the Filek) manually produced pearls from shells and scales of the plashica (an endemic fish from the Ohrid lake). 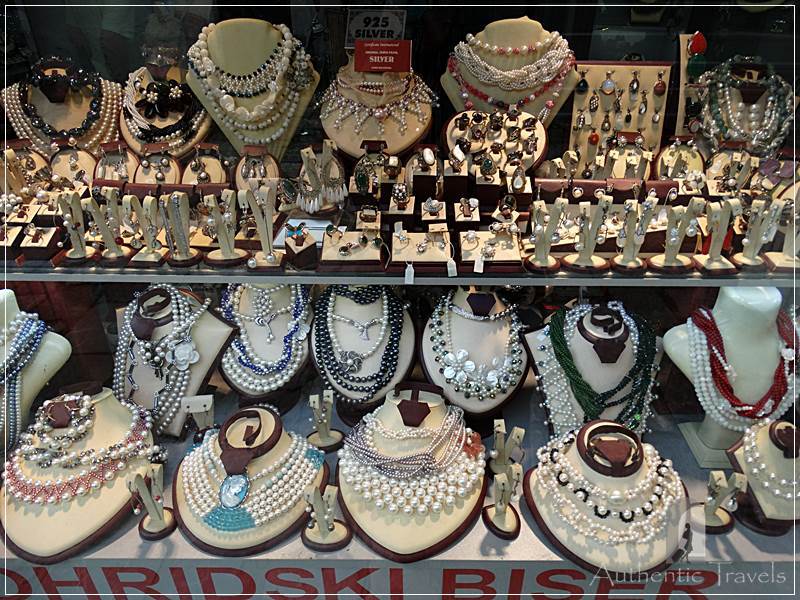 Ohrid – jewelry with pearls from the lake

Next to the Robevi’s palace, I entered one of the seven workshops in the world that produced handmade paper. They claimed they used the original Chinese method from the second century for producing paper. A boy put a mix of ground wood with water on a sieve. It was possible to add spices or herbs in the composition for decoration. The boy placed the wet paper on a platform, then under a press, and finally out to dry for one or two days. Along the main street, other workshops carved in wood or produced decorative metal items. The owner of a souvenir shop knew where Bucharest was. He had stopped there on his way to Ukraine, from where he bought items from the communist epoch and sold them in his shop. In the evening, I walked along the lakeside and tried the water temperature with my feet.

The second day in Ohrid

I went to old quarter of the Turkish Bazaar. From the Upper Gate of the old town, I descended to Goce Delcev street. Afterward, I climbed the surrounding hills and went to see Kaneo again.

From the Upper Gate of the fortress (Gorna Porta), I followed a line of steps that cut the winding streets and descend directly to the Turkish bazaar. In a few minutes, I reached the Goce Delcev street, the main pedestrian street of the bazaar. There, the area with Ottoman vernacular architecture started, with its oriental restaurants and cluttered shops facing the noisy street. I noticed they sold painted pottery, similar with the Moroccan tajines. Restaurant owners tried to catch my attention and invited me to sit at their tables. Meanwhile, a psychopath spotted me and insisted on deleting the picture I took of him by mistake. 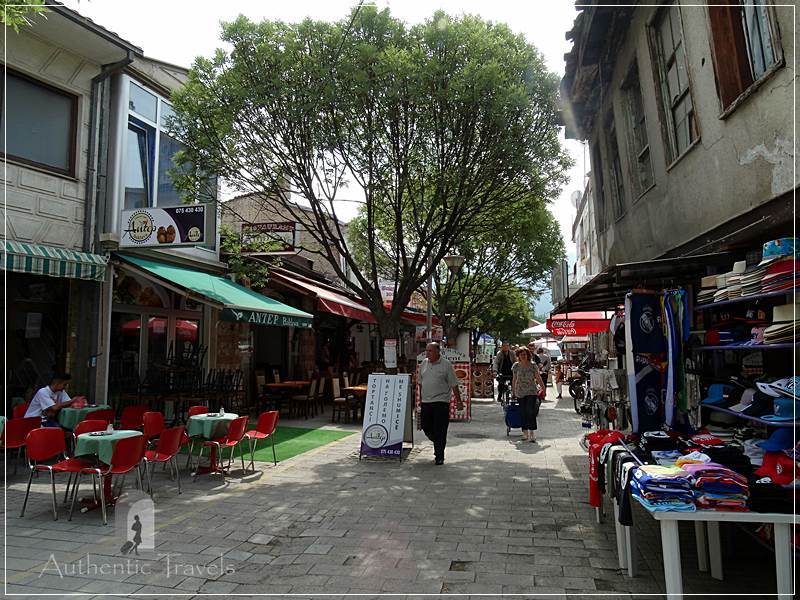 The Turkish part of the old bazaar in Ohrid

From the central square with sycamore (the oldest tree in town, grown at the entrance to the Turkish bazaar), one could see both mosques minarets and a discreet church uphill. During its development, the brick-architecture of old Ohrid influenced the Ottoman residential buildings (18th-19th centuries). Moreover, the geographical location of the town limited the space for building new houses. In consequence, this had determined the development of a maze of narrow and sloping streets. The pedestrian street Kliment Ohridski bounded the Turkish bazaar from the new town with communist buildings. However, as I climbed the neighboring hill, the cluttered Turkish houses dissolved, spread, and gradually transformed into the typical Ohrid villas. 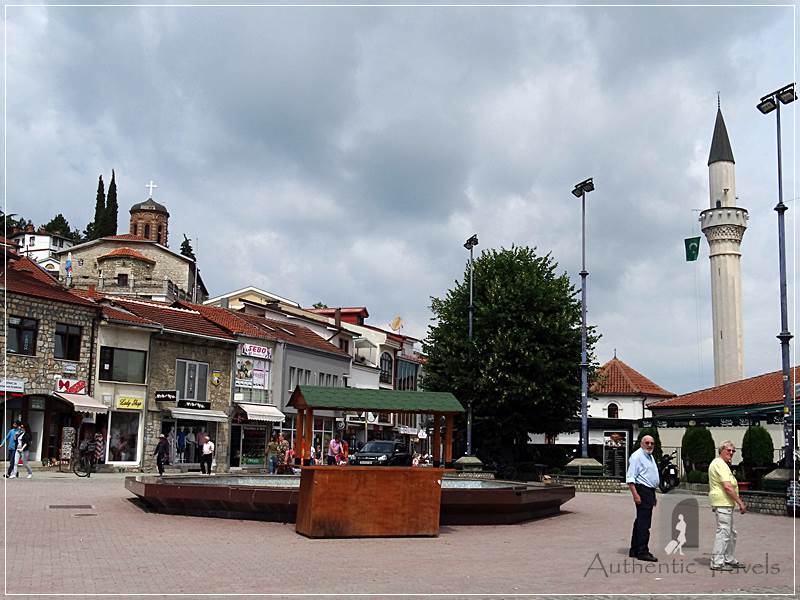 The Turkish bazaar of Ohrid

Later, I went down to the small touristic harbor of the old town. There I watched how a boatman threw stones into the water and his dog swam to bring them back to his owner. A light rain began to fall but I still went to the beach-bar in Kaneo, where I enjoyed a Nescafe on a sunbed, under an umbrella though. I turned back to the Turkish bazaar, where I had lunch – baked beans, sausages (sudzjuk), and Turkish yogurt (ayran). It was still raining and cold, so I decided to go home. As I was writing in my room, the sky gradually cleared up and at any moment the muezzin began to sing the call to prayer.

Exploring the Macedonian old town of Ohrid is the diary about the days I spent in Ohrid town (you can find the version in Romanian at In jurul lacului Ohhrid, Macedonia – I). Its continuation, my second post can be found at Exploring the surroundings of the Ohhrid Lake. And here are all my Travel Diaries from Macedonia, the Balkan Countries (x6).

Have you been to Macedonia or plan to go there? Leave a comment below this post and tell me what you liked about Macedonia or what you’re interested to see there.

22 Responses to “Exploring the Macedonian old town of Ohrid – Macedonia”