From Skopje to Mavrovo

We went with Vasko to a car service. After that, we drove up to Mount Vodno and stopped at the Macedonian Etno Village and Saint Panteleimon Monastery in Gorno Nerezi village. In the evening, we camped on the shore of Mavrovo Lake.

In the morning, we went with Vasko to a car-service to fix my car. The breaks of my car worked well. The discs had too much dust though and the mechanic had to clean them in order not to hiss anymore. We left the car in the service and went with Vasko to a cafe. There, he told us his story. He was 41 years old, had a wife and two kids, and had been working at the micro-central of Kozjak Lake for 13 years. Vasko had a salary of 600 euros as a boss at Kozjak Lake. During the war from Yugoslavia, he had to fight in the army and guard the local Muslims with a gun. He had been in a surgery four years before. He lived with his father’s kidney but the doctors would give him a maximum of ten more years to live. 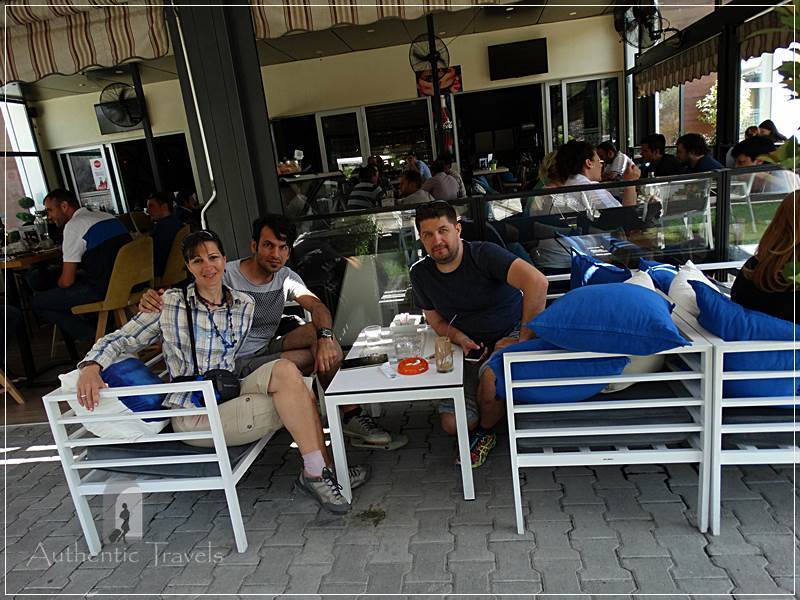 Before we left Skopje, Vasko warned us not to stop until we reach Mavrovo. He said the road had many public houses and the corrupted police wouldn’t interfere in case of trouble. From Skopje we drove up to Vodno Mountain, which watches the Balkan capital from 1700 meters. In Gorno Nerezi village we parked the car in front of the recently open Macedonian Etno Village – a sort of an open air museum which added accommodation, a restaurant, a spa center, horse riding, and souvenir shops (all of them refurbished in old traditional houses) to the original concept of Skansen. We had pleskavica (a big meat ball) for lunch at the local restaurant and then we went to the village mosque and to Saint Panteleimon Monastery – both very close one to another. The monastery was in restoration but the Byzantine church had well-preserved frescoes on its interior walls. 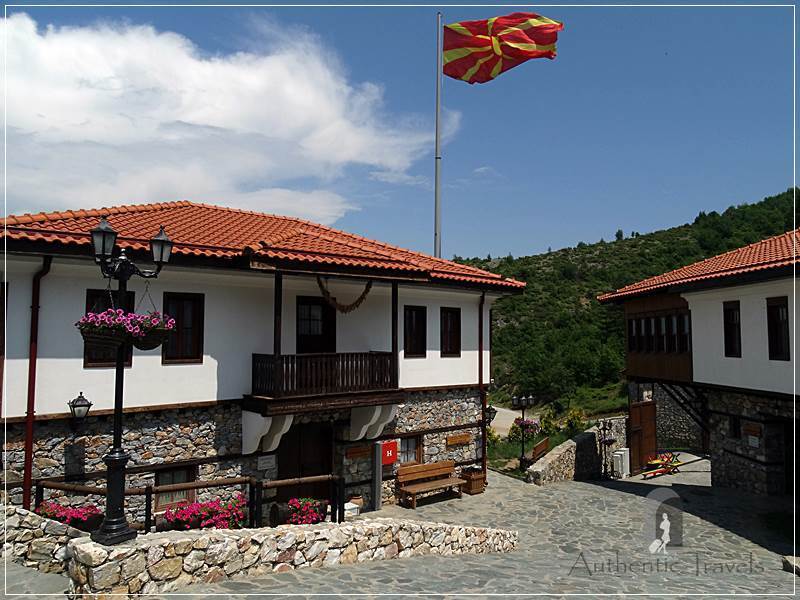 On the way to Mavrovo – Macedonian Etno Village in Gorno Nerezi

From Gorno Nerezi village we followed the tangled road toward the cable car that went on top of Mount Vodno. The cable car was in revision though, so we had to give up our trip to the Millennium Cross – the biggest metal cross from Europe. Eventually, we left Skopje and headed to Mavrovo, but we soon stopped to buy strawberries from the ‘highway’ peddlers. 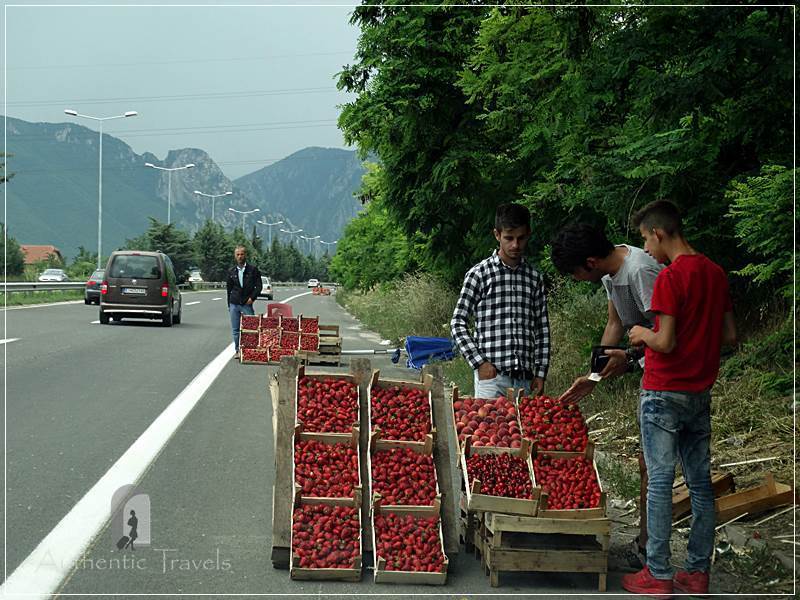 On the way to Mavrovo – buying strawberries on the ‘highway’

On the road toward Mavrovo, it rained with cats and dogs but the sky cleared surprisingly fast until we reached the Mavrovo Lake – the biggest artificial lake of Macedonia. Mavrovo was actually a winter resort, with dozens of cable cars and ski slopes, countless hotels and holiday chalets. We stopped at Saint Nicholas Church, partially submerged into the lake a few years back, but around which was possible to walk since the level of the water had lowered lately. 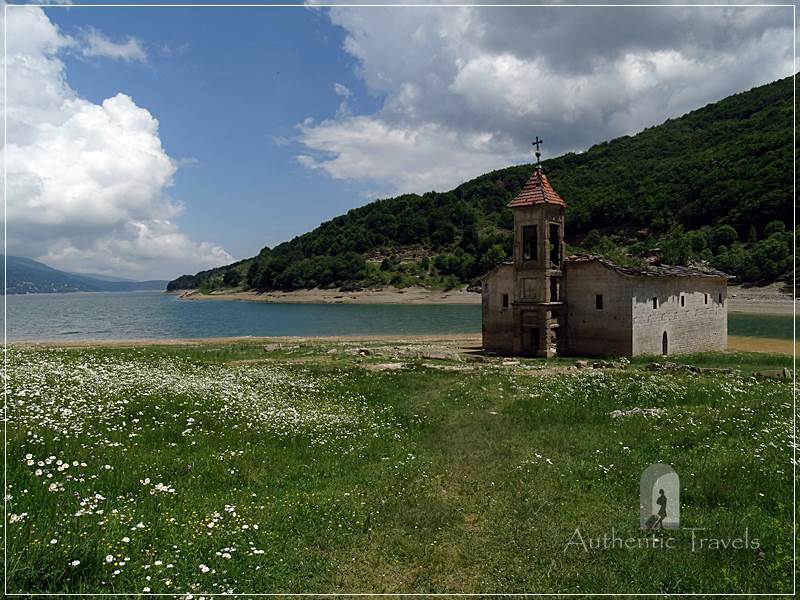 Ebi washed strawberries at a local restaurant and offered to the waiter some of them, too. The waiter confirmed that the best camping spot on the lakeside was the one that we had thought off. We parked the car near the lake, pitched the tent, and sat for dinner. We were trying to light a fire with wet wood for two hours when a group of Turks put loud music and lit a fire near us. Ebi went to them and borrowed a bit of ember for our fire. Later, a French cyclist – Stephan, camped next to us and we spend the evening together around the fire. He told us that he was cycling all the way from France to Iran in four months and that he had to be back to work by the 1st of October. 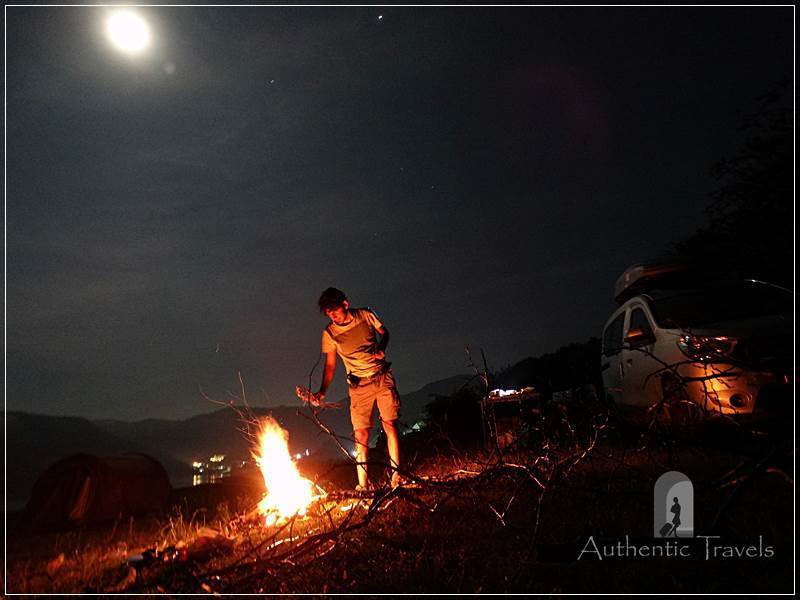 Mavrovo Lake – camping by the lakeside

We drove up in the Bistra Mountains, all the way to Galičnik. From there we turned back to Mavrovo Lake and stopped at Saint John Bigorski Monastery from Radika Canyon. In the evening, we camped up in the mountains, in Lazaropole.

From Mavrovo Lake we drove up fifteen kilometers on a good road that tangled through the Bistra Mountains. The tight serpentine reached altitude very quickly. After we passed through the evergreen forest, we quickly reached a mountain pass with expansive views. The road continued to snake smoothly through a plateau with generous meadows, guarded by rocky peaks, where we intersected mountain-bike trails in several places. We met sheep herds, apparently fierce sheep dogs, and shepherds that waved us from time to time. From the mountain plateau, we started to drive downhill and passed through herds of sheep and horses on our way to Galičnik. 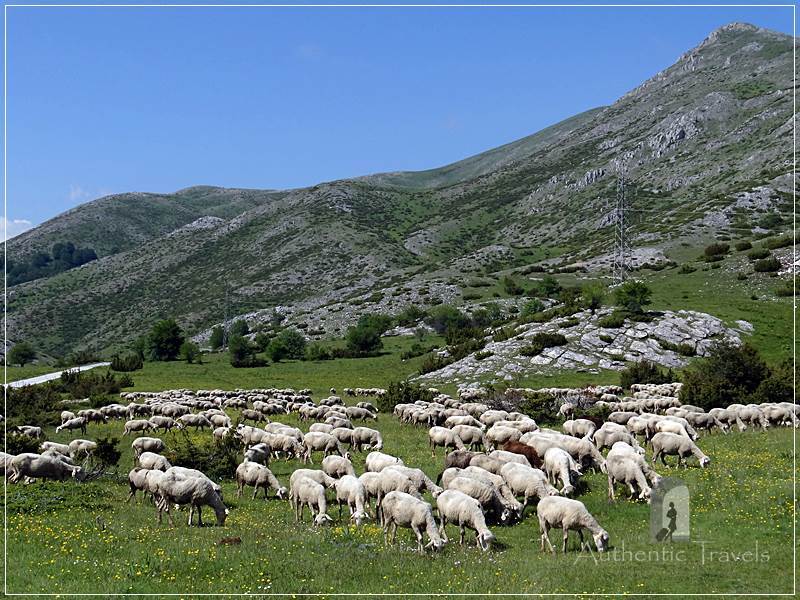 Driving through the Bistra Mountains, near Mavrovo

Galičnik village was scattered over a steep slope of the mountain. There was no other car road to reach the place although the road that went through Radika Canyon was easy to spot far away down in the valley. The houses of Galičnik were massive, like fortresses, and they were built of stone with two solid stories. A few tourists enjoyed the sunny day at the main terrace from the center of the village and a Swiss motorcyclist asked us some questions about the area. 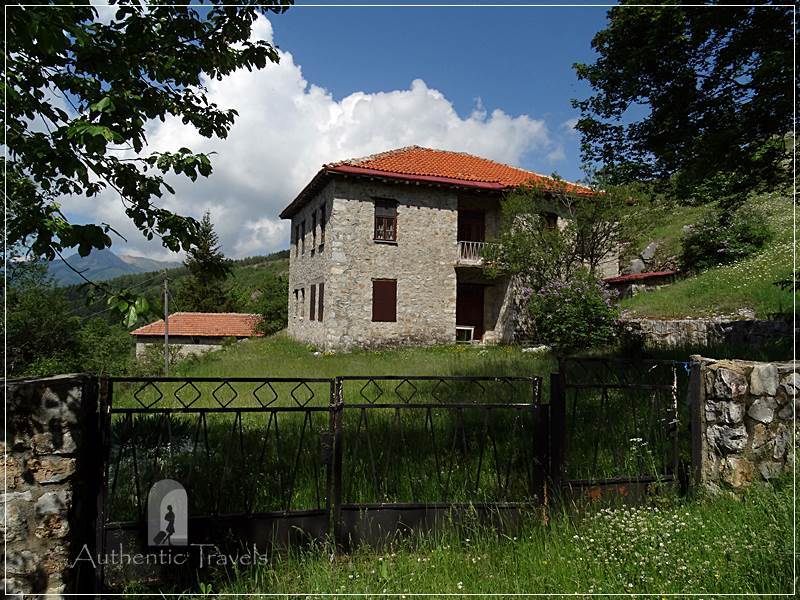 Galicnik village, up in the Bistra Mountains, near Mavrovo

From Galičnik village we turned back to Mavrovo on the same road that crossed the plateau of the Bistra Mountains. In Mavrovo we turned left toward Radika Canyon and stopped at Korab Trnica Restaurant, where we tried the homemade Turkish coffee. Radika Canyon were actually big gorges through which we went with the car until we stopped at Saint John Bigorski Monastery – one of the biggest monasteries of Macedonia. The monastery sat at the end of a series of tight serpentine. Just across the other side of the valley, the slim Turkish minarets of mosques marked every Muslim village. The church of the monastery was entirely built of apparent stone, it had a central portico and interior frescoes. The buildings for monks had stone at the ground floor while the whitewashed upper stories had wooden structure. 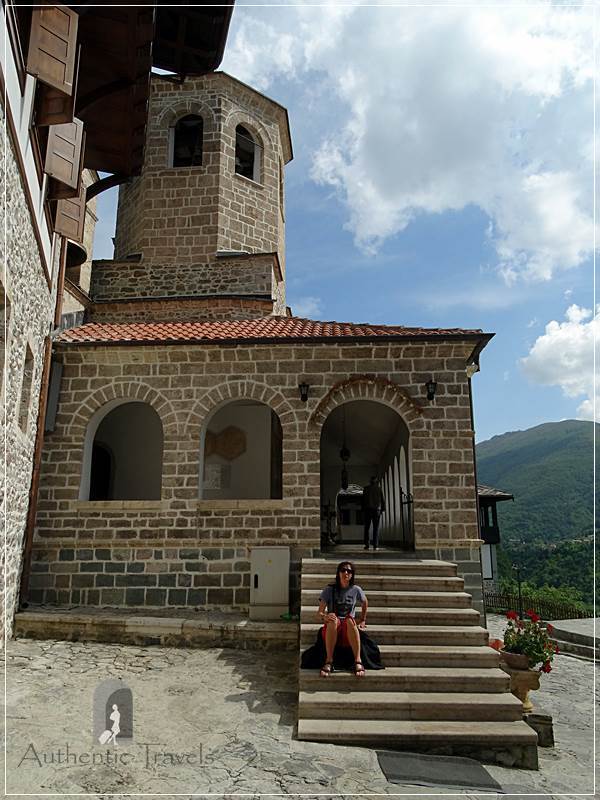 We continued our drive through Radika Canyon and stopped in Jance village, renowned for its Mijak vernacular architecture. The village had stone houses with wooden beans and small balconies overlooking the cobbled streets. The mosque of the village sat on top of the hill overlooking the valley. After we passed Radika Canyon, we turned left at the first crossroads and drove up toward the pass between Stogovo Karaorman and Bistra Mountains. We turned left once again and followed the steep road with tight bends toward Lazaropole, the highest village from Macedonia (1350 m altitude). Although Lazaropole was close to Galičnik, the two villages were connected only by mountain footpaths. 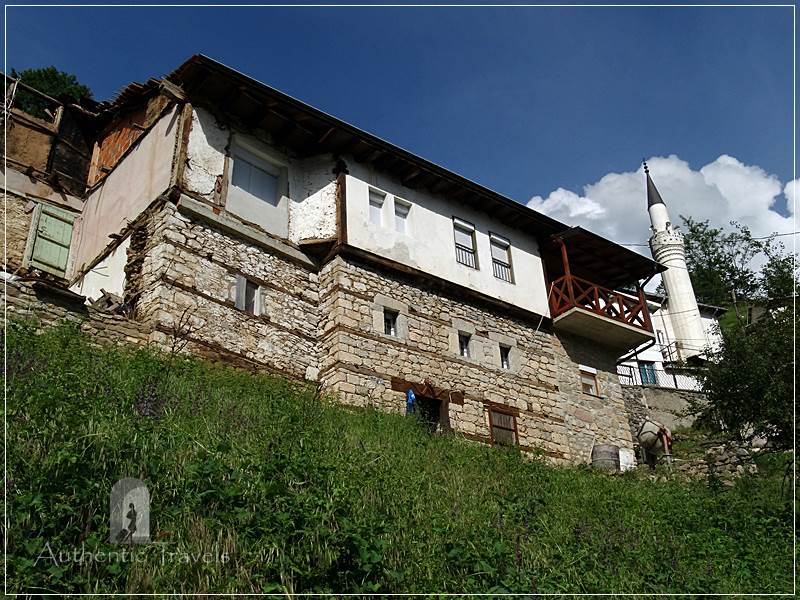 In Lazaropole we camped at the periphery of the village, near a well and the cemetery church. After we pitched the tent, a thunderstorm began and lasted until late at night.

From Lazaropole back to Skopje, passing Mavrovo

I walked through Lazaropole and then drove back to Skopje along the same road we came, through Radika Canyon.

Early in the morning, there was a thick fog all over the mountain plateau where Lazaropole village sat. Ebi had to leave to Skopje earlier so that he would catch a bus to Nis until the evening. I walked through Lazaropole after the fog rose and the sun shone. The village had houses with traditional architecture, built by the Mijak settlers. The scattered massive houses dotted the large mountain plateau. In some of them people still lived while some of them were simply locked. The houses had a high ground floor made of stone and family rooms at the first floor. In the main square, a traditional inn welcomed travelers from time to time. The church on top of the hill still preserved the tall enclosure of a former fortification. 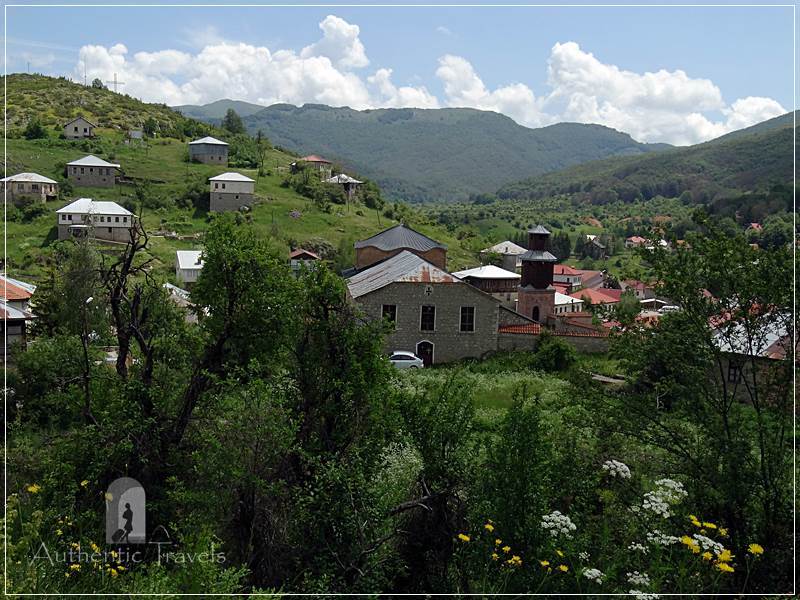 Lazaropole village – the highest village from Macedonia, near Mavrovo

From Lazaropole village I drove downhill along the steep road with tight bends. I passed the Roman bridge of Elen Skok and continued through Radika Canyon toward Skopje. I stopped for lunch at the House of Mijaks, right beneath Bigorski Monastery, and quickly booked Teo’s studio on AirBNB in Skopje. After I ate the soup of the day, I chose to drive the shortest way back to the Macedonian capital. In Skopje, Teo’s mother welcomed me in their tiny studio, located on the ground floor of a house from a quiet residential quarter of the town. The following day, I worked to catch up with my articles’ delay and enjoyed the elegant studio. In the evening, I went out for a walk in the neighborhood with elegant villas and views of the city.

Skopje Surroundings and Mavrovo Region is my diary about the Skopje’s surroundings and a few places from Mavrovo National Park, Macedonia (find the version in Romanian at Capitala Balcanica Skopje si zona Mmavrovo, Macedonia – II). The previous post from Skopje can be found at Skopje – Turkish bazaar and mountain scenery. And here are all my Travel Diaries from Macedonia, the Balkan Countries (x6).

Have you been to the Macedonia or plan to go there? Leave a comment below this post and tell me what you liked about Macedonia or what you’re interested to see there.