The first day going to Dhermi

Short description. I drove down to Jal Beach and took a swim there, then stopped and walked around Vuno village. I walked to Gjipe Beach, and on my way back, I passed Dhermi village. At Palasë Beach, I tried to camp but eventually, I found a campground at Drymades Beach.

I left Camping Moskato and followed the sinuous road that ran along the Albanian coastline. A different mountain, canyon, perspective showed up at each bend of the road. At a crossroads, I turned left and drove down a serpentine road to Jal Beach. Unfortunately, I stayed there only for a swim in the sea because bulldozers worked to build new hotels right on the beach. I returned to the coastal road and stopped in the picturesque village of Vuno, perched on a steep hillside. 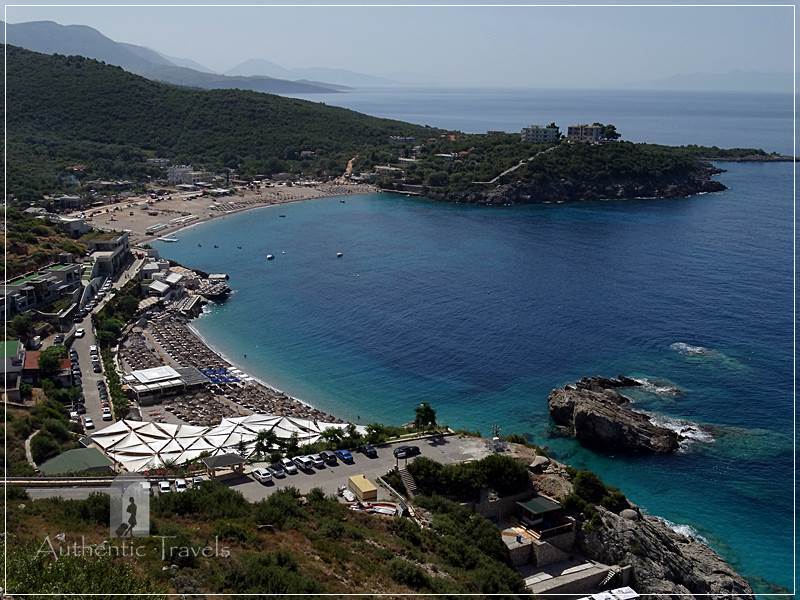 In the village of Vuno, cars ran only along the main street and the rest of the cobblestone streets were steep and narrow, accessible only on foot. Many houses had been abandoned, and some of them even had ruined and lost their roof. When I reached the houses near the hilltop, I glimpsed an old woman dressed in black. She was slowly descending the steep street and leaning on a wooden stick. Among ruins, pink oleanders invaded the courtyards of ramshackle houses. The stone houses that were inhabited, though, had white lavish and terraces with lots of greenery and shade. 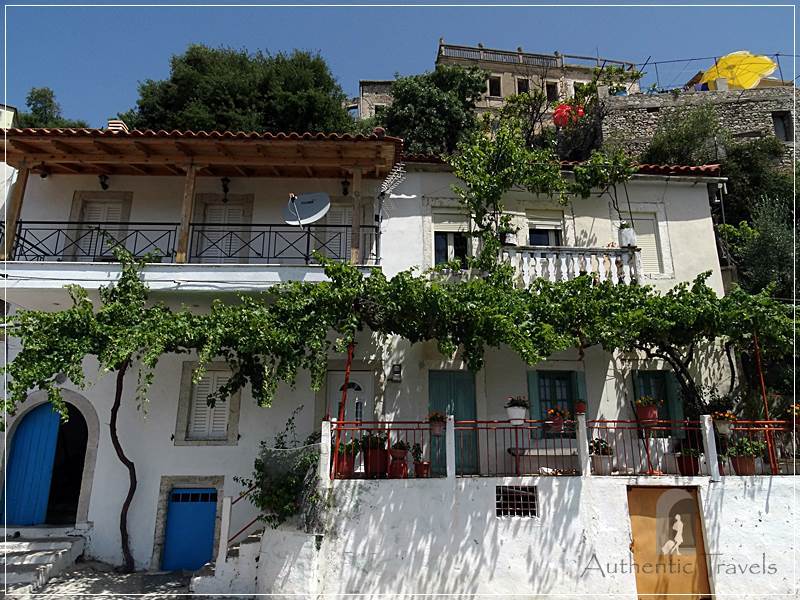 On my way to Dhermi village, I turned left at the crossroads for St. Teodor Monastery and walked down to Gjipe Beach. Gjipe Beach could be reached hiking down a trail along a canyon ending in the sea. However, I chose to park the car near the monastery and from there, I walked a dirt road for 15 minutes. On my way to the beach, I passed countless concrete bunkers built during the communist period. Although Gjipe Beach was not easy to reach, it was quite crowded and touristy. Tourists could come on foot or by boat from other resorts. Many young people sat in the shade of the rocks that flanked the beach, where they played the guitar or slept on mattresses. I had a hard time finding a free spot under a sunshade. When I found one, I had to lay on pebbles, not comfortable at all. 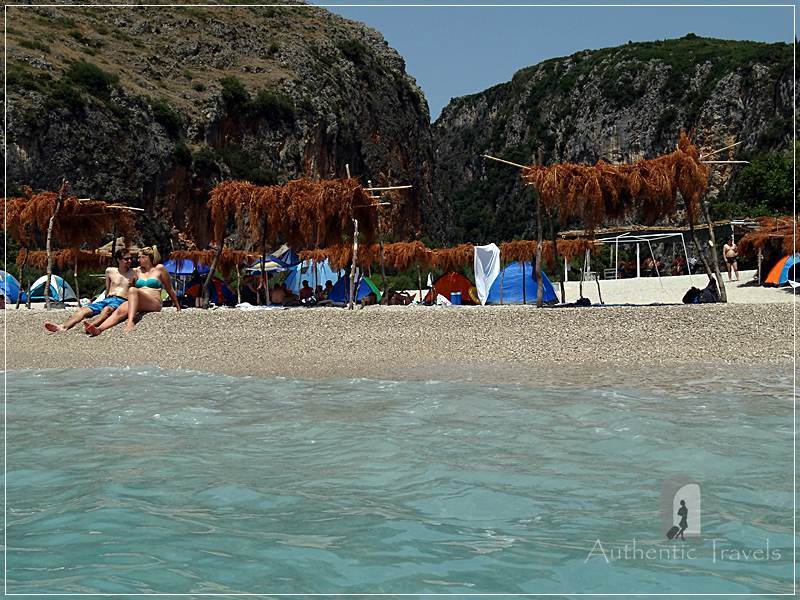 At the entrance to the canyon in Gjipe Beach, there was only one tavern, with no menu or prices displayed. A little further, an eco-camp was freely organized in a forest, but you had to walk and carry your luggage from the parking lot to there. The water was perfect for a swim, but the sun was too hot. In the afternoon, the beach was too packed-out with people and I decided to head back to my car, on an overwhelming heat, though. On the way back, I met a guy from Kosovo, Estek, who didn’t speak English but successfully knew how to use Google Translate. He was staying in the area for another day and wanted to date me in the evening. He didn’t understand what I told him in English, but suddenly remembered he had once learned the words “you are very beautiful“.

I arrived in the village of Dhermi, perched on a hill above the homonymous beach. I couldn’t find any place for lunch. At the exit of the village, I barely found a tavern, pricey though, where I sat on a shaded terrace. I quickly went to Palasë Beach, where Assaf had told me it had been possible to camp, but the municipality had started to build a new resort there and everything seemed disfigured. However, communist concrete bunkers resisted near the beach. I stayed on the beach until a boy asked me to pay the lounger I was sitting and eventually he determined me to leave. He didn’t speak English at all. It was impossible to negotiate with him to pay only for a few hours and not for the whole day as he wanted. 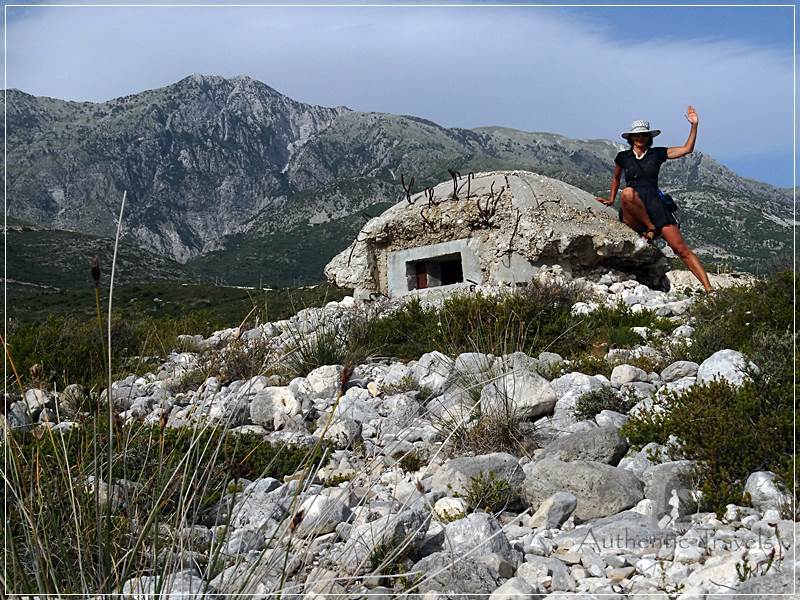 In the evening, I returned to Dhermi. Prior to entering the village, I turned right on a steep road that went down to the beach. I found the Eco Camp set up right on Drymades beach. It was relatively acceptable, but rather a youth camp with hard music and some poor sanitary facilities.

The second day in Dhermi

Short description. In the morning, I went for a walk in the village of Dhermi and spent at Dhori’s snack bar a few hours. I returned to Drymades beach in the afternoon, after it rained a bit.

At the Eco Camp, the Italians that had slept in the other tents woke up very early, so that at 7.30 a.m, I had already swum in the sea. I continued to stay on the beach for a few hours until the sun got too hot. By noon, I went to the village of Dhermi. I stopped at the fountain near Taverna Potami to refill my bottles with water and then parked my car on a steep street in the village.

In Dhermi, I climbed up to the church of the Greek cemetery, which was still used by the Greek community that had left after the 90ties, but some of them had returned. The village was perched on the hills, at the feet of the mountains. From there, one could see the sea far away, down the cliffs. Half of the houses were abandoned and only the main street was paved. The rest of the streets had wide stairs or footpaths made by people along the main streams of traffic through the village. 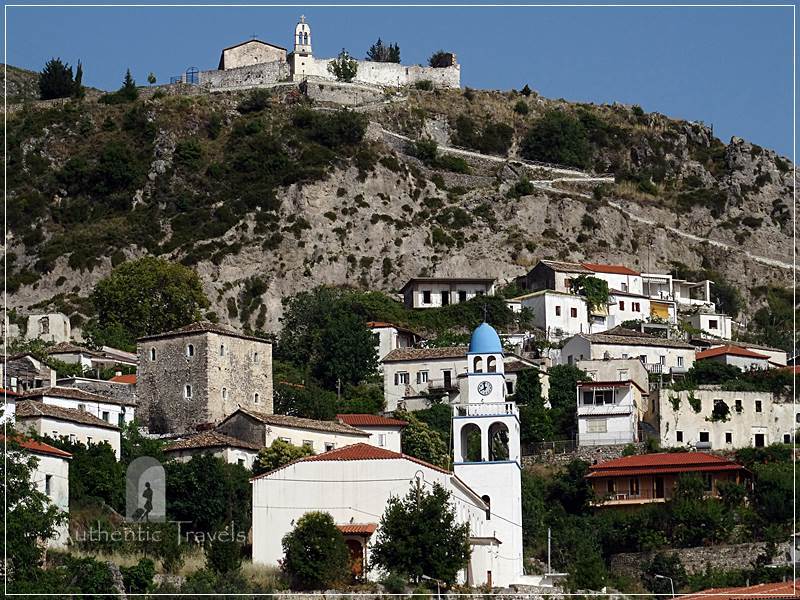 Dhermi Village – the main church and the cemetery church uphill

I returned to the car and before going to Drymades Beach, I stopped at Dhori’s snack bar. I drank a perfect frappe and eventually, managed to explain him with signs that I wanted to eat kalamachi (a kind of sandwich with roasted meat and tzatiki). Dhori was Greek-Albanian, his mother was Greek, his father was from Berat (Albania). He showed me pictures of his wife, his two children, then his grandchildren. At one point, I gave up and lost their number. 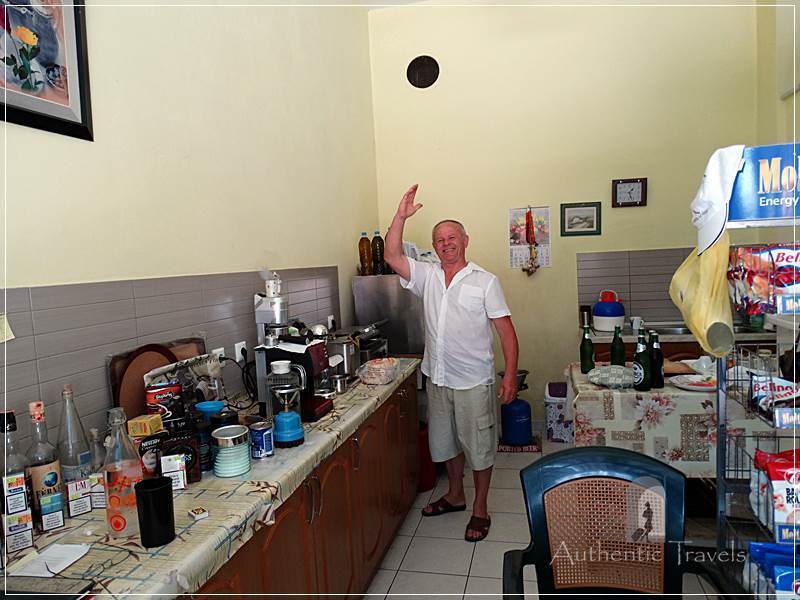 Dhermi Village – Dhori at his tiny snack-bar, selling everything though

While I was eating at Dhori’s terrace, a herd of goats passed down the street, and Dhori picked up roses for me from his neighbor’s garden. After that, all of a sudden, he brought a pair of huge binoculars. We started to look at the opposite church uphill, from where I had just come. After a while, I showed him the wide zoom I had on my photo camera. I liked the atmosphere at Dhori’s Cafe, so I lingered as much as I could there and read from one of my books at his empty terrace. Meanwhile, he was singing inside his store, and then he started to dance on Greek music. When I left, I kissed both my cheeks.

In the evening, it fell a few drops of rain and I got into my tent early. I didn’t like the Eco Camp I was staying and I couldn’t wait to leave the following day.

Short description. I left Drymades and carefully drove up on the steep serpentine road of Mount Çika. I passed the Llogaraja Mountain Pass and descended to Orikum, then spent the afternoon in Vlorë. In the evening, I found a cozy campground right on the shores of the Adriatic Sea.

Before leaving from Drymades, I swam in the sea to better wake up. From the beach, I noticed a rainbow toward the town of Vlorë, where the rain seemed to come from. I drove up to the main road that went along the Albanian seashore and had my breakfast in the car near Dhermi. After the sunrise, I headed toward Mount Çika and drove up its tight bends, most of them in a hairpin. The road climbed steadily and although the landscape was stunning, there was no place to pull on the right. 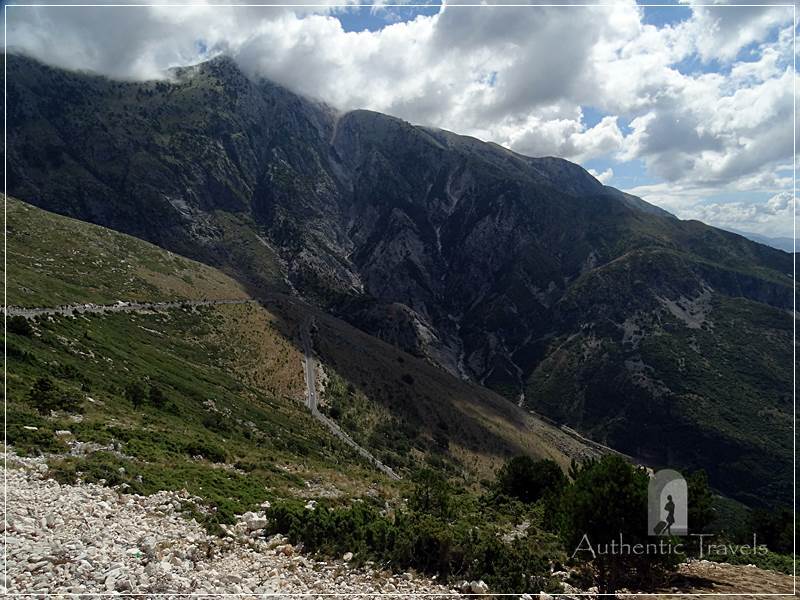 Driving over Mount Cika – view toward the sea

I continued to drive while the mountain impressively opened in front of me at every bend of the road. Up, on top of the mountain, I finally stopped at a generous parking lot, from where I had a view of the Ionian Sea and its neighboring mountains. A bit further, there were all sorts of hotels, caravan camping sites I hadn’t known about, and restaurants. Indicators for hiking trails started from the mountain pass which the main road crossed. From Llogaraja Pass (1025m) a steep descend began toward Orikum, the bay where the Ionian Sea meets the Adriatic Sea. There, a beach lined with palm trees celebrated this geographic event.

I drove downhill toward the city of Vlorë. When I arrived there, the city impressed me with its high-rise, modern buildings, painted in bright colors and featuring beachfront apartments. The municipality built a lot in the seaside area, which had many promenades, endless rows of palm trees, and stylish cafes. Around the city center, the tall modern buildings gradually turned into 4-story, unsightly communist blocks, sometimes animated by colorful and innovative murals. At noon, I heard the muezzin’s call to prayer, spotted the ruins of the ancient city of Aulon, and discovered streets with dilapidated houses in the old bazaar. 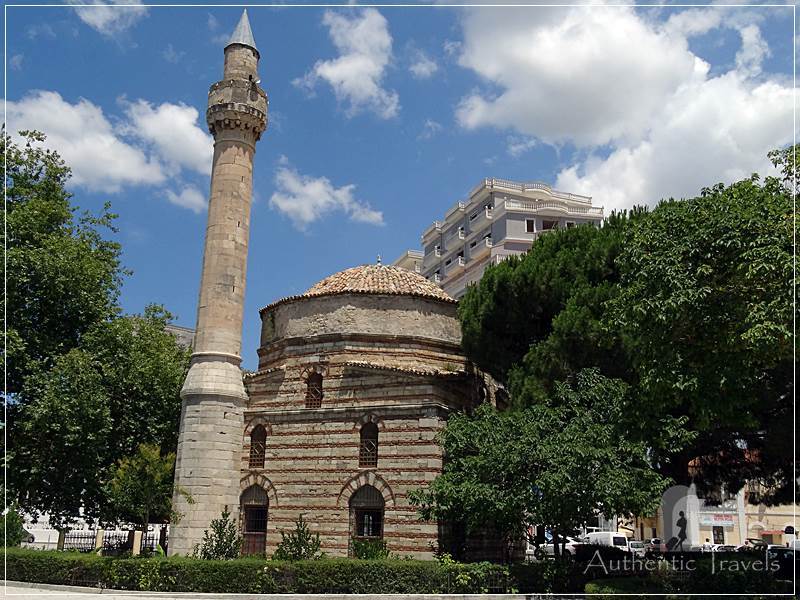 I didn’t hear back from Assaf and Shilla, so I went back along the coastal road for a while and stopped at Camping Cekodhima. I parked my car under a row of trees that guaranteed me shade and a prolonged sleep the following morning. After that, I went down to the pebbled beach, a bit windy though, and laid on a sun lounger. The Adriatic Sea created a genuine show with its inaccessible, big waves.

In the evening, I went the to Cekodhima’s Restaurant, more protected from the strong winds from the beach. I could barely eat a huge salad while admiring a colorful sunset and I contacted Alaattin from Tirana. He told me he would wait for me in the Albanian capital on the 7th-8th of July.

Have you been to Albania or plan to go there? Leave a comment on this post and tell me what you liked about Albania or what you’re interested to see there.