From Erfoud to Ksar El Khorbat

Short Description. I explored the khattara irrigation system in Majha Fezna. Near Tinejdad, I went to the Oasis Museum in Ksar El Khorbat and the Water Museum in Source Lalla Mimoun. I spent the night in a camping ground near the entrance to the Todra Gorges.

After Erfoud, a small town with reddish houses, dusty streets, and women well-muffled-up in their headscarves and djellabas, I stopped at a big tent (khaima) near Majha Fezna village. There, two Bedouin brothers (Karim and Hamid) managed the visit to the underground irrigation system of the oases (khattara).

The khattara irrigation system consisted of a network of pits up to seven meters in depth. The main pit captured the groundwater, which was then hauled through an underground canal and irrigated the oases located 10-15 kilometers from the mountains. The access pits used for the construction and maintenance of the irrigation system rose above the ground. One could climb down through a dark tunnel to one of the underground wells, where a bucket suggestively hung by a wooden lever. 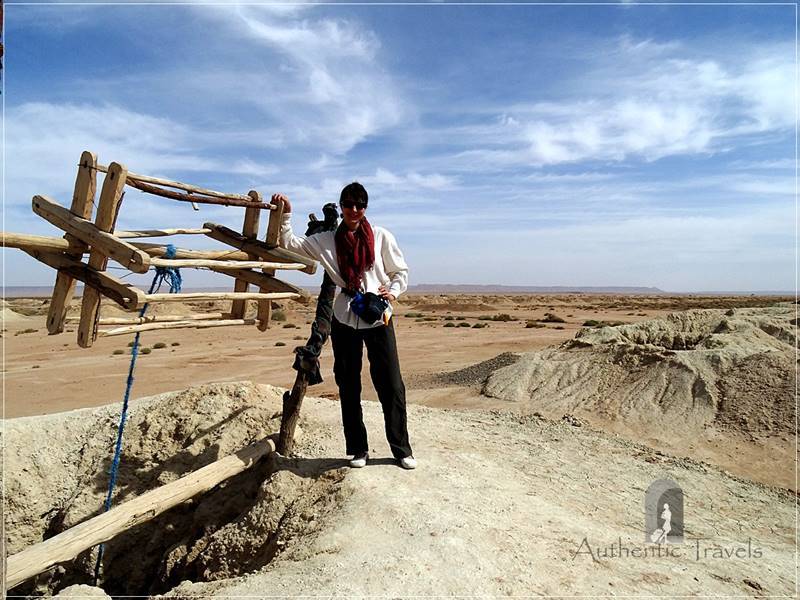 Majha Fezna: near one of the pits of the khattara irrigation system

Karim and Hamid were Bedouins from the Arabian Peninsula. They spoke Arabic and before settling up, they had a nomadic lifestyle. (they lived in a tent with donkeys and sheep). At the moment of my visit, they lived in the nearby village of Fezna and managed the visit to the khattara irrigation system. After all the tourists left, they invited me to have tea with them. When they found out I would write a book about Morocco, they insisted on having a tajine with them for lunch. 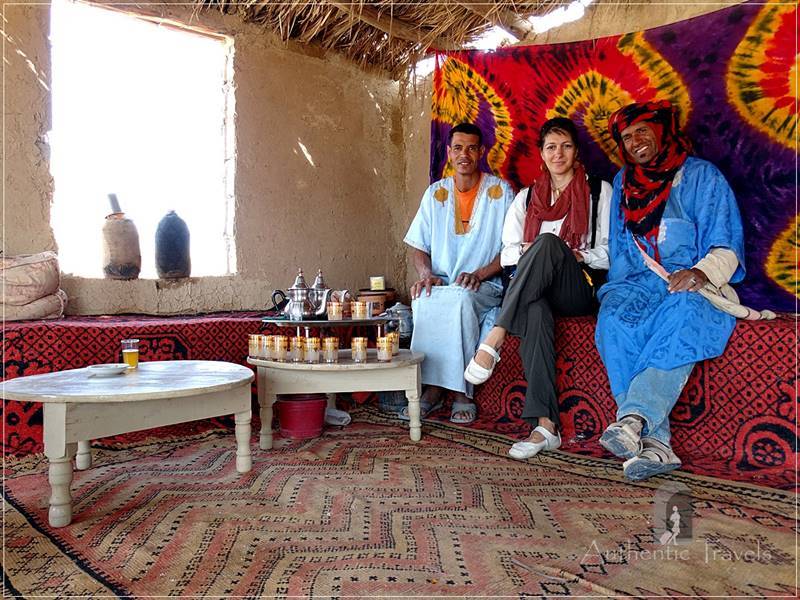 Majha Fezna: with Karim and Hamid who showed to me the khattara underground irrigation system

From Majha Fezna, the road crossed a desert region where wicker fences prevented sandstorms to reach the asphalt road. A shepherd cursed me when I took pictures of his sheep. Wild camels freely crossed the scenery dotted with isolated palm trees and acacias.

A town near the desert, Tinejdad featured reddish houses, unpaved dusty streets, and shopfronts on the ground floor of the houses. Kids ran unbothered everywhere. At the exit from Tinejdad, a bridge crossed a river toward the fortified village of Ksar EL Khorbat. In the ksar, an old mud-brick house had been partly refurbished as the Oasis Museum. The other part of the restored house had become a traditional guest house.

As I had an ICOMOS card, the president of the local NGO asked the painter Rachid Bouskri to guide me through the museum and the dark underground streets of the ksar. Rachid had been painting for twelve years. He showed me his paintings and told me he studied French and arts in Meknes (one of the four Imperial Cities of Morocco) and graphic arts in Casablanca. He even had a few exhibitions throughout Morocco. However, his heart was in Tinejdad area where he was born. The NGO sold the artists’ works and used the money to restore the ksar.

Ksar El Khorbat was established in 1860 and had 152 houses. Rachid showed to me all the restoration works made by the NGO in the village: pavements, sewage, water, and electricity. Only 50 families lived in the ksar before the restoration works but after that, 87 families lived there due to better living conditions. Nevertheless, not all inhabitants could pay for utilities. Some of them preferred to take water from the recently restored public well. Approximately seven persons lived in a house, aside from their animals (chickens, cows, sheep). The inhabitants named the streets after the tribe that lived in that neighborhood (i.e. Ait Irbiben, Ait Ikablin). Besides, 33 people worked in the Ksar El Khorbat NGO (museum, restaurant, and guest house) and most of them preferred to live in the ksar. 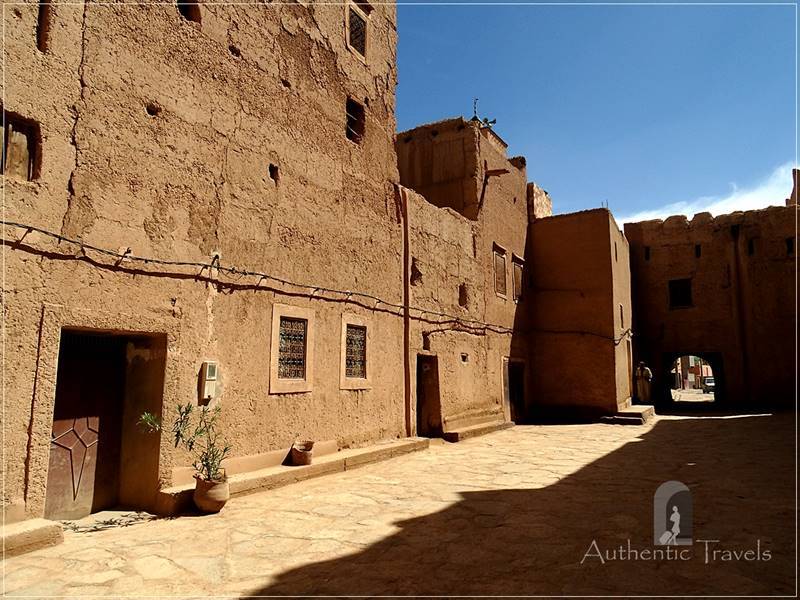 Ksar El Khorbat: asarag – the main square in the ksar

Cobblestone streets led to the central square (asarag) that suddenly opened as a public space near the fortification walls of the ksar. The inhabitants of the ksar met in the 3000-year-old square, the main space where feasts (weddings, fairs, souks) took place. Built of mud-bricks, the dwellings in the ksar had several floors, with small windows and crenelated terraces on the last floor. Inner courtyards were the only way to bring light inside the agglutinated houses of the village. From place to place, streets went out from the dark gangways and one could see the sky. 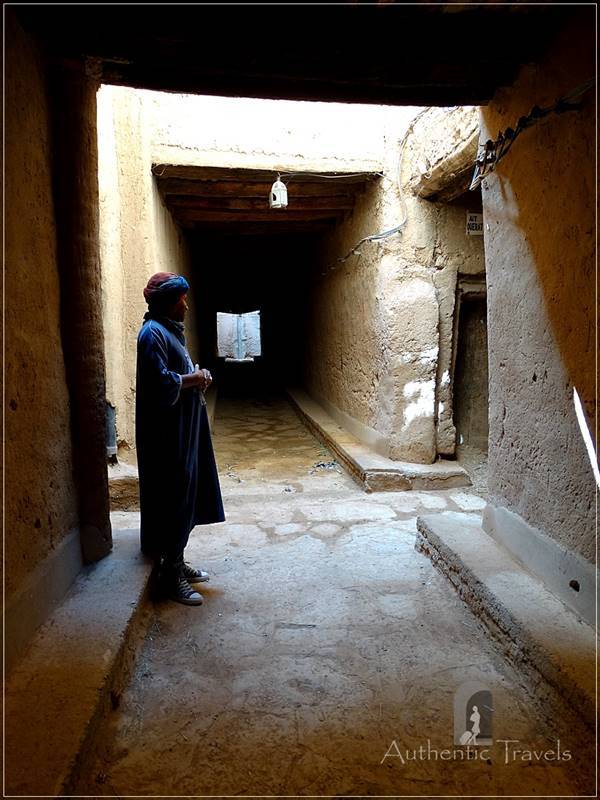 Ksar El Khorbat: typical street in the ksar, with my painter/guide Rachid

The Oasis Museum displayed local instruments, simple drawings, and old photos. It ingeniously explained the life, importance, and role of oases in the sub-Saharan region. Typical carpets were woven on big looms, while ceramic vessels were baked in specially built earth ovens. Many old prayer books were displayed in rudimentary shop windows. After that, Rachid showed me Gite Ksar El Khorbat – an old house dating from 1860, entirely built of mud-bricks, refurbished as a guest house (10 rooms, and even a small swimming pool and a minimal conference hall). All rooms displayed colorful Berber carpets, camel-wool blankets, and wrought-iron furniture. 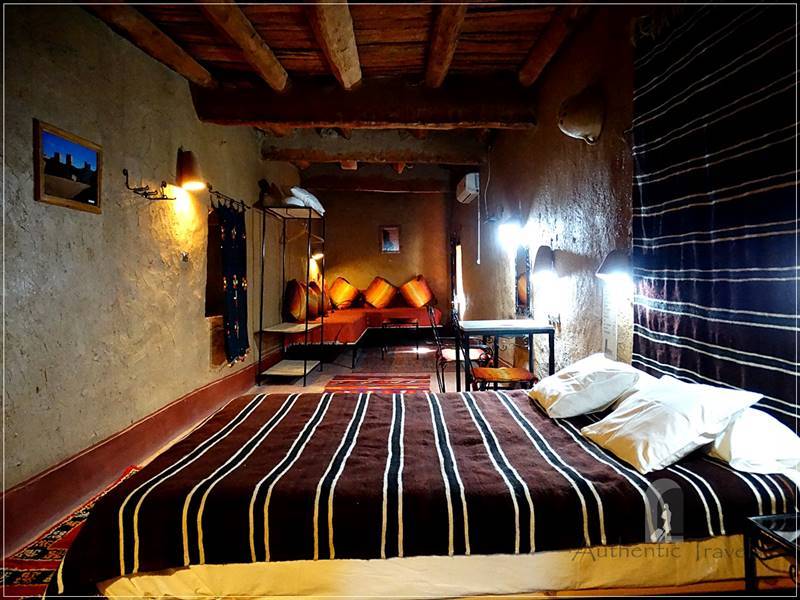 After the official visit through Ksar El Khorbat, the president of the NGO and Rachid invited me to have lunch with them and even to stay overnight in their small guest house, Gite Ksar El Khorbat. They ate tajine, while I had chicken escalope, yogurt with apples and date syrup, and then typical Moroccan tea. The restaurant of the guest house (the place where caravans once stopped) featured a palm-tree garden and pergolas with colorful flowers. 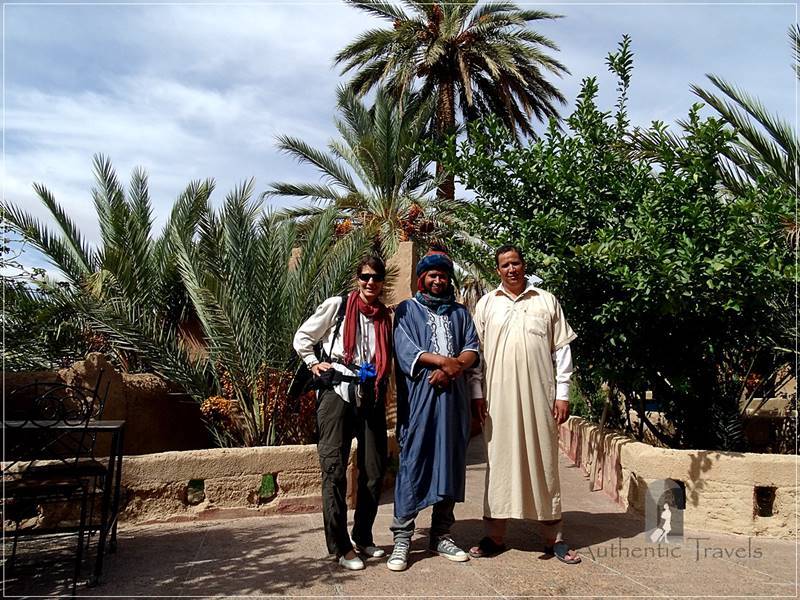 The local people founded the Ksar El Khorbat NGO in 2004. Its president had worked in Spain and witnessed how cultural monuments were restored in Europe. In 2006-2007, they had a collaboration with the Architecture School in Barcelona. The president continued to bring students from Europe for the restoration of the ksar. Also, he promoted the ksar as a tourism destination, but only to small agencies to avoid mass tourism. In 2015 they organized the Solidarity Week and many cooperatives came to sell their products. They collected 600 000 euros as a result of the event.

After the exit from Tinejdad, I craned forward to better read the signpost that pointed toward the Sources Lalla Mimoun Museum. There, the calligrapher Zaid Abbou constructed the Water Musem from scratch – his life work. He had collected the exhibits for 29 years since he lived in Agadir. In 2002, he started to build the museum in his native region near Tinejdad, and he completed it only in 2006. 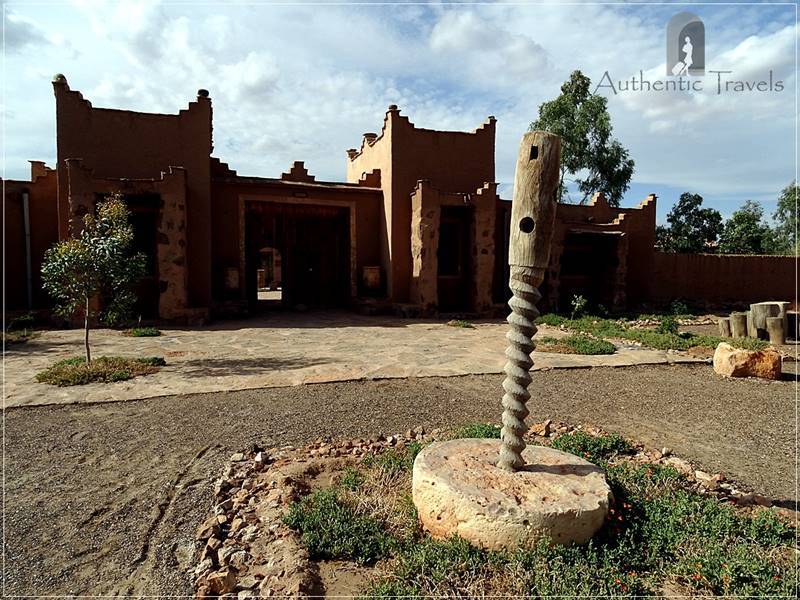 The museum had four inner courtyards – each courtyard captured a water spring from the area. The complex featured terraces, pergolas, and small buildings and it displayed old wooden gates with comb bolts (the lock could be opened only by introducing a comb with a certain type of cogs). Several camel-hair Berber tents simulated the nomads’ life in the desert. Old prayer books, the Koran, and even old texts written on papyrus and then rolled inside reed trunks. Construction techniques used to built houses of sun-dried clay-and-straw bricks, but also richly painted wooden beams and rafters. 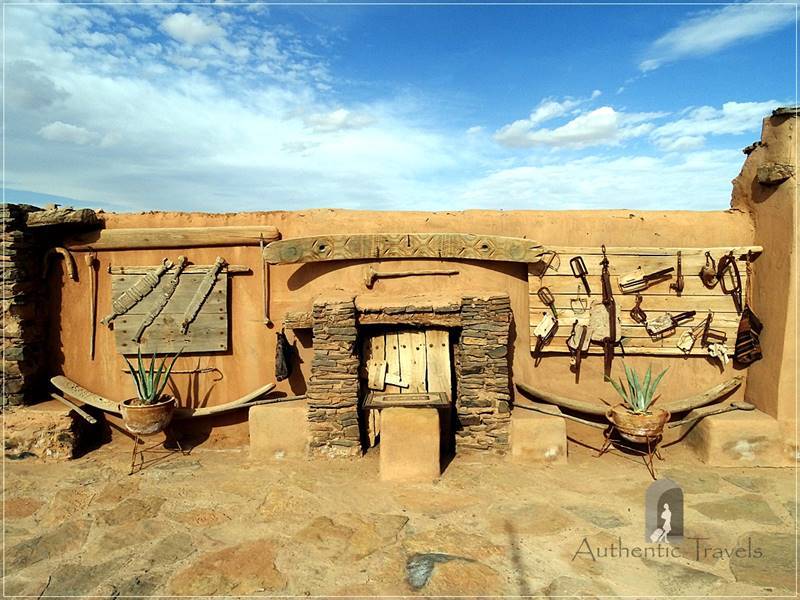 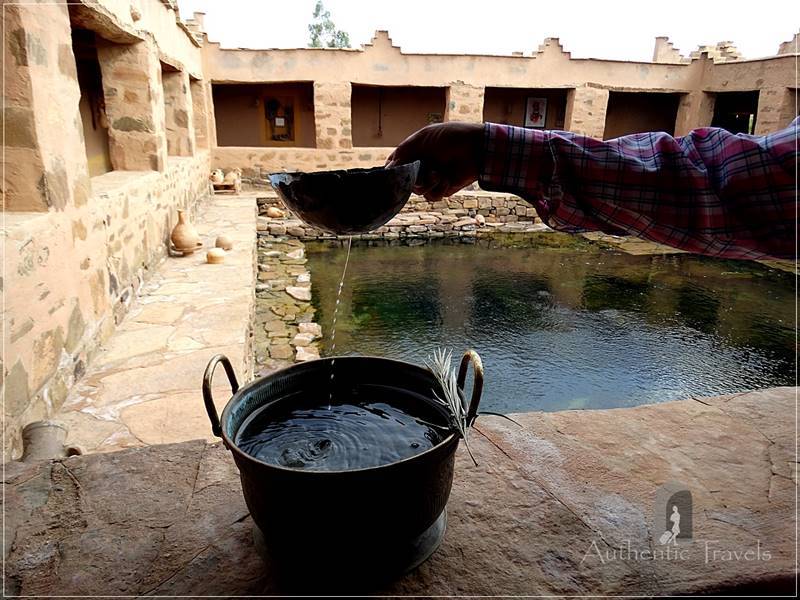 I told Zaid I liked old books. He said he liked them too. Before I left, he unexpectedly gifted me a page from an old prayer book written in Arabic. On the envelope, he wrote my name with distinctive calligraphy. He made the calligraphies with special ink, and each letter he drew had a meaning: love, freedom, and even a verse of the poet Khalil Gibran. Zaid sold a big calligraphy for 200 Dh, and a postcard with a single letter for 50 Dh. 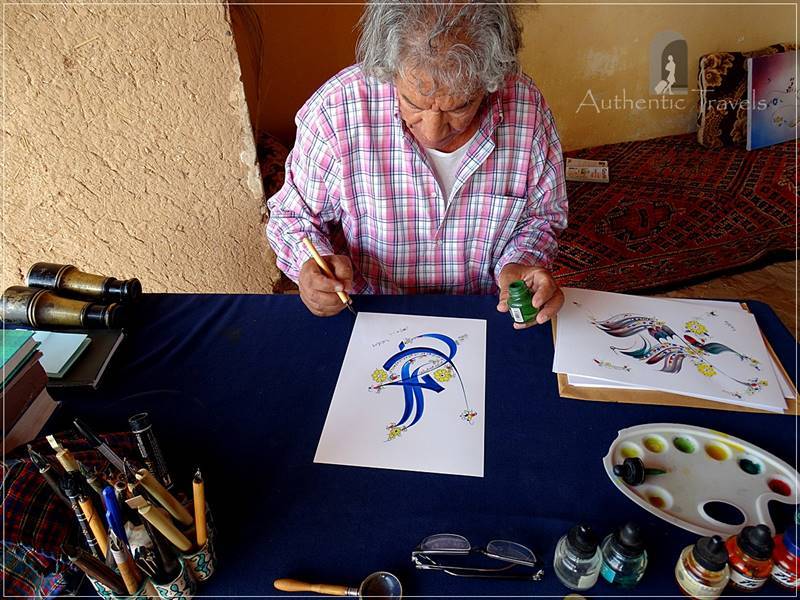 Tinghir was a typical Moroccan small town situated at the entrance to the Todra Gorges. I stopped at a panoramic lookout point overlooking the oases preceding the gorges. The mud-brick villages mingled with the brownish mountains and rocky gorges in the backdrop. Abundant oases and cultivated land plots brought a verdant spot in the brownish monochromy of the surroundings. In the parking lot overlooking the gorges, a Moroccan „allowed” me to take photos. After that, he told me I had to pay to him 10Dh for the parking (a vacant lot). I yelled at him with my improvised French that he should have told me that from the beginning. He gave up and left right away.

Women in the nearby village wore white, transparent veils (as dresses or head coverings). After a few more kilometers, I stopped at Camping Le Soleil, situated near the entrance to the Todra Gorges. The campsite had simple pitches flanked by palm trees, a few Berber tents or mud-brick houses for rent, and a Berber restaurant.

If you want to read more about my trip through Morocco, here are all my Travel Diaries from Morocco (x 21).

Have you been to Morocco or plan to go there? Leave a comment below this post and tell me what you liked about Morocco or what you’re interested to see there.

6 Responses to “From Erfoud to the Todra Gorges, passing Ksar El Khorbat – Morocco” 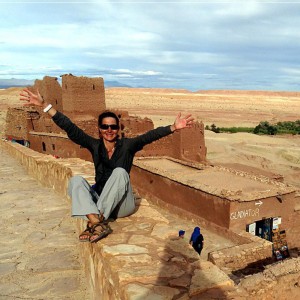 I am a tour guide and travel writer based in Sibiu, Romania. This travel site includes travelogues from my travels, travel planning strategies per country as well as a showcase of my work, and experiences we can have together in/ around Sibiu / Romania. Looking for a local expert or a Balkan-specialized content writer?

Share on FacebookShare on TwitterShare on Linked InShare by Email